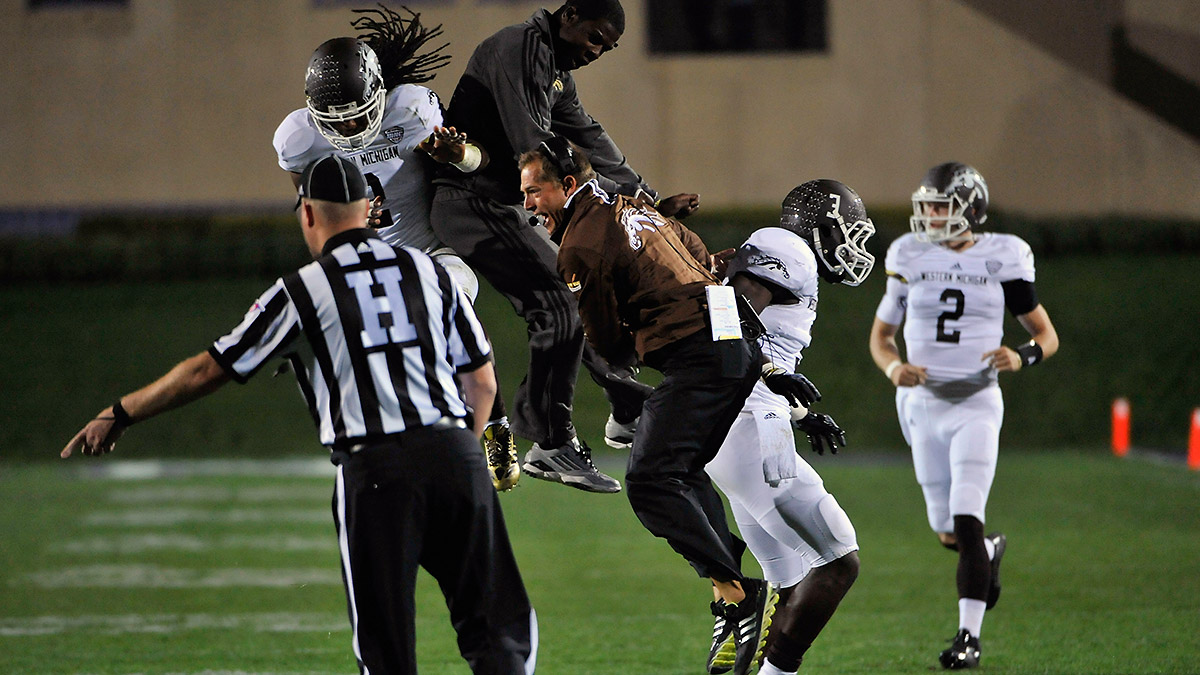 Sideline Heroes is a Q&A series featuring some of the most colorful figures in the college football landscape. Previously: Clemson’s get-back man, Adam Smotherman.

The last time we saw P.J. Fleck, he was a freshly hired first-year head coach taking over a hard-luck Western Michigan program. He was the most polished coachspeaker we’d ever seen in real life, and we are pretty sure we left a signed LOI somewhere in Kalamazoo.

Fleck followed up his 1-11 inaugural campaign with an 8-5 season in 2014 and a trip to the Famous Idaho Potato Bowl. He inked a six-year contract extension in December, will return his entire coaching staff along with 1,500-yard back Jarvion Franklin in 2015, and is poised to sign the top recruiting class in the MAC. He’s convinced that his 2-year-old daughter is going to follow him into the profession. He also continues to not spontaneously combust from pent-up energy, a serious feat.

Fleck spoke with Grantland this week about his changing practice footwear habits, the most gnarly lessons he had to learn as a first-time skipper, and how much nicer strangers are to him in the grocery store now that he’s no longer heading up a 1-11 team.

How’s dad life now that there are two daughters in the mix?1

I’m telling you: Paisley will be the first female head football coach in America. She’s growing up just like her father, somehow. It’ll be interesting.

Does it feel like you’ve had to do a lot of dadding with all those young guys on your roster? How much of your job this past season was life-skills coaching?

I’d say 95 percent of it. Especially because we played 18 freshmen this year. But one cool thing about youth is, they never know how really good they are. And they really don’t know how bad they are. It was a lot of life teaching, but obviously life and football go hand in hand. It was just like our season. Lots of struggle. Lots of triumph. Lots of slip-ups.

You said they don’t know how good they are. Do you think they surprised themselves with that six-game win streak in the back half of the season?

Click here for all of our interviews with fascinating people from the worlds of sports and pop culture.
I don’t know if they surprised themselves. I think it was more of a “well, these were the expectations, OK, we did it.” Sometimes I’d get in the locker room and think, Do they know what they just did? As a coach, when you see something like being down 21 points at Ball State, and coming back, with a youthful football team? I really told myself that once or twice. But they just know that’s what the program demands of them. That’s the expectation. And it sets the bar higher for next year. It kept me calm, at times. Like, “Coach, hey, relax. We got this.”

Wait, they were so unfazed that they’d calm you down?

By the end of the year, yeah. “Coach, we got this, we’re gonna go win this game, don’t worry.”

Have you developed a strategy over the past couple seasons for not letting the mistakes eat you alive?

Yeah, some of those are really hard to swallow. You’re on the 1-yard line against Northern Illinois, you’ve got ’em down 21-3, you’re gonna make it 28-3, and you fumble. We hit the upright in overtime against Toledo. We returned a punt for a touchdown to go up in the bowl game and it gets called back. You look at some of the ways that we lost some of the big games, and we could’ve very easily been 11-1 or 10-2 on the year.

But you know what? We weren’t. Period. “If only” doesn’t exist in our program. We were 8-5; we deserved to be 8-5. We played like an 8-5 football team. We were a team this year, but we didn’t have the chemistry within the team, and that’s the goal for Year 3. Year 1 was to dig a foundation as deep as we could build it, and then Year 2 was all about becoming a team. Year 3 is about, OK, how we’re putting in the air-conditioning, putting in the lights.

With that kind of long view of a plan for the program, how difficult is it to resist fiddling with aspects of the team that can’t be fixed except by time or experience?

The no. 1 thing [to me], as a coach who takes over a program rebuild, and on top of that being a young coach who doesn’t have the experience, is you just don’t know what you don’t know. The hardest part to resist is tinkering. When we were 1-11, I could see where people jumped ship. I could see the temptation to jump ship. Abandon it. If 99 percent of you is saying, “Oh my gosh, we’ve got to find a different way”? But the 1 percent is the biggest part, because that’s what you spend the most time on. The vision, the direction, the plan. The future. And you know it’s there. And you know the plan is right. You just need to get the right people involved in that plan, and that takes time.

You got it. And I’m a very impatient person, as you know. It taught me patience. That is the greatest lesson I’ve ever learned as a head football coach. I learned it before, but I got the true meaning this year and last year. Don’t sacrifice what you really want for right now. And that’s human nature.

What was your sales pitch when recruiting after that 1-11 campaign?

It was selling a vision that wasn’t there. It’s a great plan, but it’s not there. It’s like opening a Christmas present, the biggest one under the tree, and you open it and you’re excited and you look in the box and there’s nothing there. Except a little letter, that says: “It’s coming.” So that was the hardest part for us, but it wasn’t that hard. It was the people. Not the football players. Not the talent that Jarvion Franklin has. It’s the character of that young person. It’s the work ethic of Corey Davis. It’s the internal heart of all the players we’ve recruited that they’re made to turn programs around. They’re OK with going against the norm. They’re OK with being made fun of in their high schools because they picked a school that was 1-11.

Has that pitch changed at all now that you guys are out of that pit a little bit?

Among recruits, is there a personality type you’ve fixed on as your particular “type” of kid?

It goes back to “the how.” It’s not what a kid accomplishes. It’s not where he went to school. It’s how he got there. I want to know the process of a young man’s life. And if he’s never struggled, he’s probably not right for my program. And if he’s never had successes, he’s probably not right for my program. And it’s about the how to us. The nekton mentality, always attacking, never full. The Prefontaine pace — gotta be urgent, can’t be lazy. And then you look at the farmers’ alliance. I’ve got to be able to trust him. So you look at that first, then you go height, weight, speed, all that other stuff, which is really a bunch of baloney at times, because you win with people.

When you first got to Kalamazoo, you were going so far as to pick out the color of your secretary’s desk yourself. Do you feel less need to micromanage now?

I wouldn’t say I’m that big of a micromanager. I let my coaches coach. But here’s the whole thing about that: There’s no one to do this stuff, so I have to. Everybody else has their jobs, and I want them to work, and then I’m the interior designer. I’m the decorator, I vacuum when I have to, I raise a lot of money. But this year, finally, I’m doing more football, which is great. I got great people. I got elite people.

Essay question time! Two years and change into this job, what’s been your biggest learning leap?

This is going to be broad, but I’ve learned that I’m a tough man. I could be tougher. But I can withstand a lot. As a head football coach, you are always in the public eye. People think they own a part of you. What they can say to you in the grocery store, when you’re with the kids, that’s inappropriate, you have to be able to handle that. “Sorry you feel that way, thanks, keep rowing the boat. C’mon, kids, let’s go.”

When was the first time that happened, do you remember?

Oh, yeah. We were 0-6, and it was an elderly couple. He was acting like he was about 30. Lot of energy. Let me know that he’s lived here for 70 years, let me know exactly what he thought of me, and what he thought of the DJ, the new uniforms, and where it was I could go to.

Are you going to wear cleats to practice this spring?

I have stepped back. How ’bout that? I still wear them. But just on days when I’m really gonna work. Our wideout coach wears ’em now, and our defensive line coach. I go over there and pretend I’m the best D-line coach in America. They probably both wear cleats so I’d stop coming over to their groups.

Before we go: What were your favorite additions to your sloganing collection this year?

Oh, boy. The “change your best” was always good. “Race to maturity,” that was big for us. “The how mountain,” we were always climbing that how mountain. We have a lot of sayings, but when you look at our program and you get into it, it’s an educational program. You’re going to school within our program. It’s the school of life.

It’s a lot harder to point those fingers at an 8-5 team.