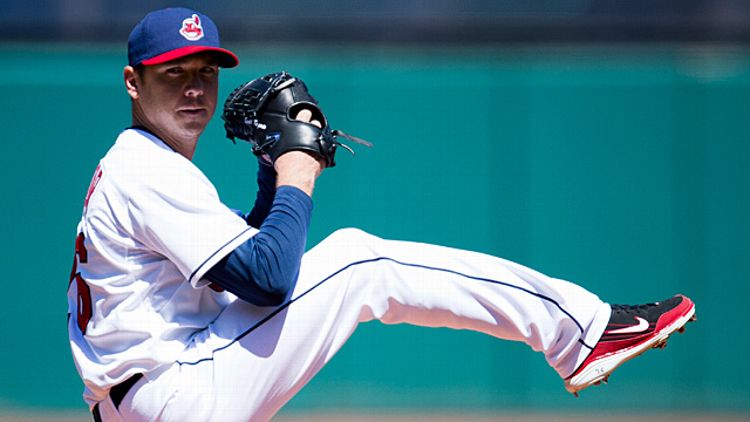 Before the season, I drafted in my head (but never published) a column on how the Cleveland Indians could win the AL Central this season. They’ve got a good offense, and a good bullpen, but one of the worst starting rotations you can imagine. So to make a run at the playoffs, the Indians, I thought at the time, would need to catch every break from a rotation of question marks: Brett Myers, Trevor Bauer, Daisuke Matsuzaka, and Ubaldo Jimenez.

Less than two months into the season, we can say pretty safely that those breaks aren’t going to happen. Myers is hurt; Bauer’s brief major league cameo featured a constellation of hard-breaking pitches that wound up farther from the plate than a pissed-off toddler’s dinner; Matsuzaka didn’t even make it out of camp; and while Jimenez has shown improvement in his past few starts, a return to his Cy Young form in Colorado is almost certainly out of the question.

But one place I (and just about everyone else) never even considered to look for a savior is in Scott Kazmir.

If Carl Crawford was the first building block in the Tampa Bay Rays’ ascent from laughingstock to contender, Kazmir was second. In 2004, the 20-year-old lefty was the centerpiece of a trade that’s now far enough in the past for us to stop mocking the Mets about. He made his debut in Tampa that year, then finished ninth in Rookie of the Year voting in 2005. In 2006 he made his first All-Star team. In 2007, he led the American League in strikeouts, and in 2008 he started Game 1 of the World Series. As Kazmir rose, so did the Rays.

Then his velocity started to go, and the Rays sold high on their first ace that mattered, trading him to the Angels. Kazmir was pretty good in the second half of 2009, but was almost scatologically ineffective the next year. In the blink of an eye, he was off to Mark Prior Land, a place where former phenoms go, bouncing from minor league contract to minor league contract, until they either regain at least a semblance of their former shine or have their third shoulder surgery.

So when Kazmir, who is, amazingly, only 29 years old, popped up in Indians camp, the best-case scenario would be that he’d turn into a lefty reliever like Rich Hill or Oliver Perez, throw a couple dozen innings, then blow out his arm for good. Nobody expected much of him, and it was something of a surprise when he even made the team.

In Kazmir’s first start of 2013, he got absolutely bombed: 89 pitches in 3⅓ innings, more base runners than outs. But every start since then has seen him improve. In last week’s win over Oakland, he struck out 10 men in six innings without walking a batter, and was still hitting the mid-90s with his last few pitches.

Now let’s not get ahead of ourselves. Kazmir has had exactly three starts that haven’t sucked in two and a half years. The last time he pitched more than six innings was July 5, 2010, and he hasn’t gone more than seven innings in a start since August 21, 2009. Further, he has one complete game in his career, way back in 2006. Even if everything breaks right, he is not a workhorse ace. He will not ease your pain by going the distance.

But now we’ve seen that one glimpse of the old Kazmir, it’s tough not to get excited. And that’s why former top prospects and former top-end starters will continue to get chances, no matter how ineffective they’ve been or how many surgeries they’ve undergone. Dontrelle Willis, Mark Prior, and Brandon Webb were all pitchers who, eight to 10 years ago, were among the best in the game, but because of injury or for some other reason, fell precipitously off the cliff. Prior, Willis, Webb, and Kazmir have all gotten more rope than one might expect, because no. 1 starter talent doesn’t come along that often. If they’re damaged goods, even a partial return to their old form makes them a significant asset for a team in search of pitching help. It’s why Matsuzaka got called in to Indians camp this season, too. A mediocre, known-quantity free agent like John Lannan or Joe Saunders might have a higher probability of helping the team, but Kazmir represents a shot at the moon. And with nothing to risk but the cost of a minor league contract, it makes sense to take that chance.

Sifting Through What's Left of the NFL's Free-Agent Heap