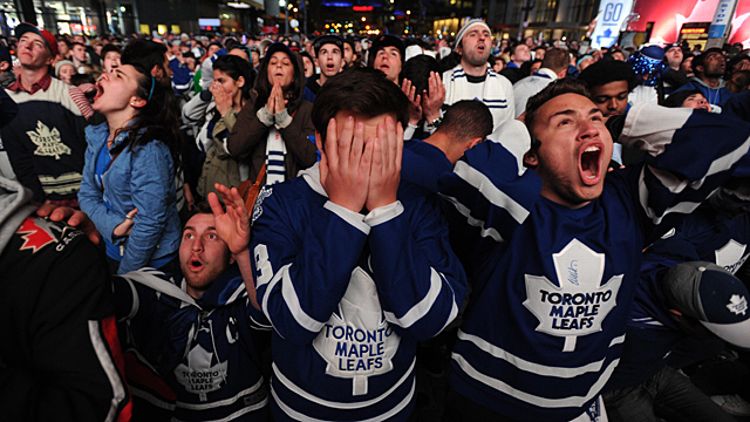 There’s a secret that Toronto fans aren’t supposed to talk about, but after what happened Monday night, I don’t care about anything anymore, so here it is: Heading into Game 7 against the Boston Bruins, Leafs fans were OK with losing.

Not “OK” as in we wouldn’t care. Leafs fans wanted a win, were hoping for a win, and — in some cases — may even have talked ourselves into expecting a win. And we were ready for the three hours of agony we knew were coming. A Game 7 in the NHL playoffs is pure torture, and Leaf supporters were feeling that every bit as much as fans of the Bruins.

But there was an insurance policy, because the 2013 Leafs season was already a success. A team that hadn’t made the playoffs in seven seasons and was expected to miss them yet again had ended the drought. Young players who’d been written off as busts suddenly emerged. A franchise that floundered for a decade had finally found an identity. And though they were written off after falling behind three games to one in a series against a team that had spent the last few years kicking sand in their faces, the Leafs clawed back with a pair of gutsy wins to force a deciding game.

A loss would sting for a while, sure. But it couldn’t really hurt, not the way big losses are supposed to. It couldn’t leave a scar, whether it came in a blowout or sudden death or somewhere in between.

Unless it turned out to be one of Those Games.

We all know Those Games. They’re the ones where the sports gods skip past winning and losing and move straight to abject cruelty. They come in different flavors, but the end result is always the same: stunned silence, a sick feeling, and a nagging concern that you shouldn’t be doing this to yourself. Watching sports is supposed to be fun. Those Games aren’t.

By now, you know the details. The Leafs had built a 4-1 lead by midway through the third period Monday. Nobody blows that kind of third-period lead in today’s NHL. They’re locks. But the Leafs did, giving up three late goals — including two in the final minutes with the Bruins goalie pulled. The rules of the NHL said Toronto had to go out and play overtime, but by that point, it was a formality. Every hockey fan in the world knew how this one was going to end. Six minutes in, Patrice Bergeron banged home a rebound. Game over, season over.

Maple Leaf fans got to experience one of Those Games. Again.

In the aftermath of a collapse like Monday’s, people outside a fan base have a strange compulsion to want those inside it to rank the night. Where does the Bergeron game rank compared to the Roenick game, or the Momesso game, or the Fraser game, or the Gelinas game, or the Gretzky game? Can you make a list?

It sounds like fun, but it misses the point. Games like Monday’s aren’t something that a sports fan wants to organize like library books on a shelf. That’s reserved for the good stuff, where you want to argue and debate and relive all the little details. You don’t rank Those Games, because that would involve thinking about them.

Those Games don’t get neatly filed away. They get tossed into a messy pile somewhere in your sports fan psyche. They’re the landfill in your backyard. You still know they’re there. You’ll walk by them every day. But you don’t want to wade in and look around. Why would you? No good ever comes from it.

Every sports fan can recognize Those Games, and some of us know them better than others. Cubs fans, Vikings fans, Clippers fans, fans of any team from Cleveland, Bills fans, and a handful of others. We know who we are. We’re in the club. Given enough time, fans of every team will eventually get to play tourist at one of Those Games. But we seem to live here.

This year will mark the 10-year anniversary of the week that two of the most famous Those Games played out within days of each other. You don’t even need to describe the games. You just need a pair of names: Aaron Boone and Steve Bartman.

Red Sox fans and Cubs fans used to sit at the head table of the club. The Cubs are still there. The Red Sox got out, and they won’t be coming back for a generation or two, if ever.

And that’s the beauty of all this, the one saving grace that gives you the will to go on. There is a ticket out of this club, and we all know what it is: When your team wins a championship, you get to take a torch to your team’s pile of Those Games.

That’s where the hope comes in. It’s knowing that sometimes you get the Bartman game, a kick in the groin that serves no purpose beyond reminding you that you’re in the club and that sports will never make you happy. But sometimes you get the Boone game, that one last failure to toss on the pile before the big bonfire. Redemption might be coming, even if you don’t know it yet.

This Boston Bruins team had their own Boone game. In 2010, they blew a 3-0 series lead to the Flyers. The decisive loss came in Game 7, in Boston, when they coughed up a three-goal lead, which all sounds strangely familiar. It was a collapse for the ages, maybe the greatest in hockey history, destined to be talked about forever. And then the Bruins went out and won the Stanley Cup in 2011. Nobody talks about 2010 anymore.

That’s the only positive thing a sports fan can hold on to after a game like Monday night’s. When you watch your team lose one of Those Games, you’re never sure if it’s going to be a Boone game or a Bartman game.

And yes, any Maple Leaf fan who’s been paying attention over the past few decades can probably give you a pretty good guess which side we’re going to wind up on. But you don’t quite know for sure. So you cling to whatever hope you can salvage that someday, just once before you die, you’ll get to punch your ticket out of the club.

But until that day comes, you do what you’ve always done. Try to forget, realize you can’t, wait for the latest layer of scar tissue to grow, and throw another one of Those Games onto the pile.