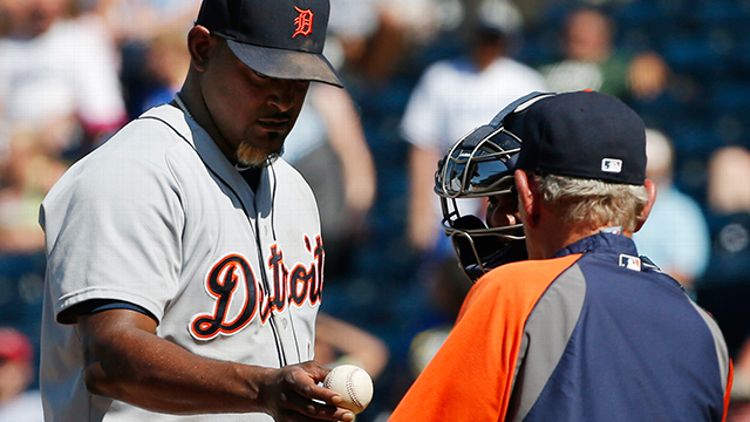 You’ve got fantasy baseball questions, the Twitterbag (Tweetnest? We need a better name for this thing) has answers. Let’s go.

Who should I trade for a bat? Harvey, Verlander, Greinke, Matt Moore, or Shelby Miller?
—@Capuano10

You want to cash in the pitcher with the highest perceived value — even better, the one with the biggest gap between perceived and actual value. Moore is a pariah now after two terrible starts. Zack Greinke has lost a lot of his preseason buzz, and even a cursory look at his superficial stats would cause your leaguemates to yawn. Justin Verlander is the best of the five, only his stats don’t quite reflect it because of randomness such as his .345 batting average on balls in play — I’d keep him unless someone made you a ludicrously great offer.

This is between Miller and Matt Harvey. Miller has been phenomenal, but he also threw just 150⅓ innings last year and is already at 81⅓ this year. I don’t think the Cardinals necessarily have a hard cap on his innings, and I’m not a big believer in the Verducci Effect, but I could see St. Louis at least pulling in the reins a bit as the regular season goes on, especially if they plan to count on him for the playoffs, too. Harvey has a somewhat similar innings issue (169⅓ innings last year, 90 this year), plus the Mets could have their own reasons to rein him in, since the Wilpons have a better chance of finding their missing money in the banana stand than the Mets do of playing meaningful baseball after Labor Day. The peripherals are similar, though Miller will get more run support and thus is a slightly better bet for wins. Honestly? Put both Miller and Harvey up for sale, then cash in whichever one draws the most interest. You’ll get plenty of takers either way.

In a dynasty is it better to build around elite players or lesser players who offer more surplus value over their keeper price? I.e. if given the choice between Kershaw at $40 or Sale at $7, who do you take?
—@Nmculbreth

Even in a keeper league, the IDGAC plan comes into play here. Clayton Kershaw is just … there’s nothing freaking wrong with the guy. He’s the blue-chipper of blue-chippers. If you draft him in late March, you forget about him, check back in six months, and you’ve got top-five stats, more or less guaranteed. Thing is, Chris Sale is a damn good pitcher, and a much bigger bargain at $7 than Kershaw is at $40, even accounting for keeper inflation. Go into next year’s draft with Sale at $7, and you’ll end up with something like Sale, Adam Wainwright, and a bottom-of-the-barrel closer for a total of $40. All hail St. Kershaw, but in this case you would want the combo platter instead.

I never veto trades, unless there is clear collusion going on. Once you start vetoing, every trade perceived as even slightly lopsided will become a leaguewide screaming match, at which point everyone’s fun is ruined. If the person who is making the short end of this deal keeps being this dumb, just don’t invite him back next year. More harmonious way to run the league for now, plus the league will be stronger for it in 2014.

We gonna get to see Puig all season or he going back down?
—@Dre2K19

Unless he just stops hitting completely, it would be tough to imagine Yasiel Puig going back down this year. This insane start has bought him a ton of immunity for when the inevitable slump occurs. Plus right now he’s a phenomenon, someone the whole baseball world stops to watch every time he steps to the plate. Moreover, the Dodgers outfield is only full in theory. Carl Crawford and Matt Kemp both look like they’ll be out longer than expected, maybe a lot longer. Even if and when they return, Andre Ethier doesn’t exactly pose a huge threat as long as he’s hitting like vintage Rey Ordonez. I wouldn’t sweat it.

What is Puig’s true value?
—@rohanmexico7

Now we’re talking. In most cases with highly hyped prospects, the best time to trade them is before they play a single game. At that point, imaginations are running wild, with visions of Mike Trout’s 2012 season running through fantasy players’ heads. Puig has been the rare exception. Only one other player in major league history homered four times in his first five games, the way Puig did. (Sure it was the forgettable Mike Jacobs, but let’s keep that between us.) He has gone homerless for the past five games, but Puig’s value remains at or near peak level. If anyone in your league thinks Puig is this year’s version of Trout — a rookie so prolific he can win a league for you almost by himself — offer him and ask for a more reliable veteran commodity. You might be able to flip Puig and a lesser player for someone like Matt Holliday. And in a keeper league where you’re making an all-out run at a title this year, you could do even better. Say you’re in a league with contracts and/or limits on the amount of time a player can be kept, Miguel Cabrera is in his walk year, and the person who owns Cabrera stands little chance of winning this season. How could that owner say no to a Puig for Cabrera offer?

Agnosticism is a valuable trait to have as a fantasy player. Puig might be tons of fun to own. But you should at the very least dip your toe in the pool and see what an overeager leaguemate might be willing to offer. There’s a slight chance that Puig really is the new Trout. But the odds are overwhelmingly against it. Act accordingly.

Who are some good AL buy low hitters that can help avg?
—@Machu_Young

David Murphy’s a career .279 hitter who is batting just .211 this year. Already a decent contact hitter, his strikeout rate this year is a career-low 13.2 percent. This pretty much boils down to a 96-point gap between Murphy’s career BABIP (.307) and this year’s BABIP (.211). I’d also take a flyer on Yunel Escobar — hitting .251 this year vs. .280 career, low K rate, depressed BABIP, and few people have likely noticed that he’s raised his OPS 189 points in the past five weeks, following a miserable start.

Is Tampa Bay playing coy or are they serious about keeping Wil Myers on the farm?
—@Jeremyclarky

Three days ago, I wrote that a Myers promotion would make sense, but that two factors might work against that happening right away: (1) The Rays being pathologically loyal to players who aren’t producing, thus making you wonder where Myers will play (especially on a team that’s been raking after a terrible first two weeks); and (2) the Rays being exceptionally cautious about service time, and thus wanting to wait a while longer to ensure enough rookies have been called up to negate the threat of Myers being a Super Two player who’d be arbitration-eligible a year earlier than his employer would like.

Luke Scott is now 23-for-111 with 31 strikeouts and three home runs, a few days shy of his 35th birthday and three years removed from his last decent season, likely enough to sway even the stubborn Rays that he needs replacing. Plus Gerrit Cole and Mike Zunino have both made their major league debuts in the past couple days, and Zack Wheeler should be up in the next few days too. If Myers hasn’t made his major league debut by this time next week, we should start asking if the NSA’s moved from widespread surveillance to mind control, and if Andrew Friedman’s the first target.

Should I keep Jose Valverde? He has no trade value, only option would be release.
—@TheNumbers_Guy

In a shallow league, you can probably release him, if only to preserve your sanity. Valverde’s velocity has been waning for years. This wouldn’t be a problem if his split-fingered fastball were still a deadly weapon; it isn’t and he’s barely throwing it anymore as a result. Though their record might not show it, you could argue that the Tigers have as much or more talent on their roster as every other team … with their one unshakable weakness being at closer. Jim Leyland knows this, Dave Dombrowski knows this, a second-grader pumped full of cough syrup knows this. The Tigers will fix this problem soon. If you’re taking bets on the first significant trade before the deadline, Detroit picking up a front-line relief pitcher could be a good call.