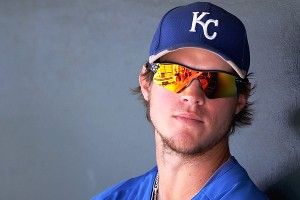 Three weeks ago, we warned you about players who could see their value drop as the trade deadline approached.

Today, we’ll tackle five players who could be primed for big upticks in value. One caveat: If you’re in a 10-team mixed league, you might not have the roster space to carry a setup man who may or may not land a closer job or a prospect who may or may not be on a big league roster in a couple weeks. These are target players for deeper leagues, all of whom could help push you toward a championship if everything breaks right.

Wil Myers, OF, Royals: That description isn’t quite correct. Wil Myers should be an outfielder for the Royals. He is in fact an outfielder for the Triple-A Omaha Storm Chasers. This is not in any way Myers’s fault. In 35 games at Double-A this year, Myers hit a ridiculous .351/.421/.739, with 13 homers, 11 doubles, and a triple in 134 at-bats. Promoted to Triple-A, Myers has kept mashing, hitting .310/.397/.626 with 30 extra-base hits in 54 games. So what’s the holdup? It’s not service time. We’re past the point at which calling Myers up would potentially qualify him for super-two arbitration status, where he starts earning more after two-plus seasons instead of three. There’s been talk of refining Myers’s skills before calling him up. But at this point there’s a good chance he is what he is: a very-good-to-great hitter who’s not going to deliver a ton of defensive value.

No, it’s something else altogether. When asked in late June what was delaying a Myers call-up, Royals manager Ned Yost said the team doesn’t want to bring him up until he has a clear path to an everyday job. Myers projects as a right fielder in the majors. The Royals’ current right fielder is hitting .250/.290/.379. But for a bit of luck fluctuation on balls in play, those stats are right in line with three of Francoeur’s previous four seasons. Unfortunately for the Royals, the one year that differed from that pattern was last year, when Francoeur hit 20 homers and put up the best offensive numbers of any full season in his career. Those results prompted the Royals to give their personable right fielder a two-year, $13.5 million contract. The Royals could try to trade Francoeur to open a spot for Myers, but Francoeur’s skill set points to a very good part-time player, a platoon guy who can hit lefties well and play excellent defense, but no more. As you might expect, there isn’t much demand for players that limited, sitting on a .669 OPS and making $6.75 million a year. Kansas City could also bench or even cut Francoeur, but cognitive dissonance isn’t an easy condition to overcome, never mind that the Royals’ money has already been spent, regardless.

Myers has more upside than anyone on this list. But this battle against inertia also makes his status unknown. The Royals could generate fan excitement and possibly goose attendance if they bring up their all-world prospect and he starts producing anything close to, say, Bryce Harper numbers. They could also give their potential franchise player a needed first taste of big league competition, so that by the time the Royals contend, Myers will hopefully be well acclimated to the challenges of playing in the majors. From a distance, the decision looks easy. In Kauffman Stadium’s offices, it probably seems like anything but.

Luke Gregerson, RP, Padres: We covered the potential demand for Huston Street’s services — and the Padres’ likely willingness to cash him in for prospects — three weeks ago. Though Dale Thayer did collect a few saves earlier this year when Street was hurt, Gregerson has emerged as the Padres’ primary setup man with Street back in the closer role. Armed with one of the best sliders in baseball and a gaudy strikeout rate of 10 per nine innings, Gregerson hits the stopper mold. Pitching half his games at Petco has and should continue to smooth out whatever rough edges exist in Gregerson’s game. If given the opportunity to close for the last two months of the season, you could be looking at 10-12 saves (or more), solid ratios, and ample strikeouts. That’s the kind of player for whom you’d gladly raid your free-agent budget; grab Gregerson now while he’s still an anonymous setup man, and he’ll likely come dirt cheap.

Aaron Crow, RP, Royals: Call him the poor man’s Luke Gregerson. The Royals could (and should) trade Jonathan Broxton just as surely as the Padres should flip Street, given the limited use an also-ran team has for a veteran closer. But Crow might have slightly more competition for the closer’s job if Broxton leaves, with capable righty Greg Holland pitching well after a rough start to the season (following a terrific 2011 campaign). The good news is Crow’s command has improved significantly this year, pumping up his strikeout-to-walk rate to nearly 3-to-1 from just over 2-to-1 last year. Crow also gave up too many home runs last year, but that might’ve been partly due to bad luck, which cranked his home run–to–fly ball rate to a frightening 17.6 percent; he’s yielded just two homers in 39 innings this year, and sports a strong 2.91 FIP. Another good speculative saves play.

Alexi Amarista, IF/OF, Padres: Less upside than anyone on this list, but also a higher floor. Amarista’s already seeing semi-regular playing time with the Padres, after coming to San Diego earlier this season in the Ernesto Frieri trade. The 23-year-old mighty mite (he’s listed at 5-foot-8, 150 pounds) has platooned at second base with Logan Forsythe, played some outfield, and even found some spot work at shortstop. Being eligible at multiple positions, including both up-the-middle infield spots, already proffers solid value in deeper leagues. Amarista’s 83.6 contact rate also bodes well for a strong batting average: He hit .312 in nearly 2000 minor league at-bats and sits at .298 through 48 games this year in the bigs. Though he’s only stolen three bases this year, Amarista’s an above-average baserunner who once swiped 38 bases in one minor league season. If the Padres flip Carlos Quentin in the next week and a half, Amarista could seize more playing time, which could heighten the value of his strong batting average and deliver cheap steals down the stretch.

Tyler Skaggs, SP, Diamondbacks: Like Myers, Skaggs is a 21-year-old top prospect still toiling away in Triple-A. Unlike Myers, he hasn’t remotely mastered the highest rung of the minor leagues. In four starts for Triple-A Reno, Skaggs has struck out a modest 13 batters in 22 innings, with six walks, 22 hits, and three home runs allowed — including a three-walk, one strikeout outing Wednesday. On the other hand, the Diamondbacks aren’t dealing with a Jeff Francoeur–type quandary in Skaggs’s case. Daniel Hudson’s out for the season, and Arizona has already called up fellow prospects Patrick Corbin and Trevor Bauer at different points of the season to man the fifth starter job. Corbin was sent back to Triple-A Saturday with the return of Joe Saunders to the rotation, while Bauer got demoted Wednesday after four rough starts that produced 13 walks in 16 ⅓ innings pitched. Skaggs may well be the next of the three pitching prospects to get a crack at the SP5 job. Rookie pitchers can be wildly unpredictable, and Skaggs’s lack of experience in the high minors only raises the uncertainty. But as a flyer in a deep league, Skaggs’s potential makes him worth a shot.