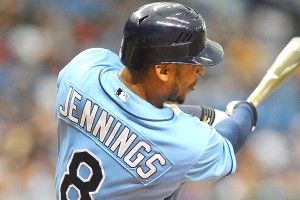 We’re approaching your keeper league’s trade deadline, and your chances of winning this year are slim to none. You want to cash in your veterans for killer keepers, but the owners of Mike Trout, Andrew McCutchen, and Clayton Kershaw understandably aren’t budging.

It’s time to look at next-tier keeper candidates. Rather than trading all your tradable parts for the guy with the Mickey Mantle comps, you might be able to trade your Justin Verlander or David Wright for two or three of the players below.

Most prospects don’t start out like Mike Trout. Hell, Mike Trout didn’t even start out like Mike Trout, hitting .220/.281/.390 in his 40-game debut last year. The Rays’ left fielder enjoyed a much stronger debut when he became a full-time major league player for the first time last year. He was so good so quickly that this guy Bill S. … no that’s too obvious … let’s say B. Simmons, sent me 462 furious e-mails complaining about the Rays’ reluctance to bring him up earlier. Jennings slumped down the stretch, but still finished the season with a solid line of .259/.356/.449, in the pitcher-friendly environment of Tropicana Field.

This year’s been awful by comparison. Jennings got on base at a decent rate to start the year, but managed just six extra-base hits in his first 31 games. He then hit for three and a half weeks with a knee injury. His season has turned for the worse since his return — he’s hit just .222/.286/.354 in the past two months and four days. Jennings doesn’t have the excuse of youth on his side the way Trout did when he struggled as a teenager getting his first taste of the majors, since he turns 26 on October 30. All of these factors, along with a bit of a track for injuries, do make him a riskier investment. But they also make him a bargain. Jennings’s speed, defense, and a lack of other options more or less ensure the Rays will stick with him this year and beyond. He’s Tampa Bay’s leadoff man, which offers the subtle hidden bonus of more at-bats and thus more chances to rack up counting stats. And the talent that made him a hot fantasy commodity this spring and the subject of a War and Peace–length intra-Grantland debate a year ago is still there.

The Much-Improved But Still Not Well-Known Player: Chris Carter

Hit 125 homers across four levels over the course of four seasons, and you’re going to get noticed. And Carter did, earning Baseball America’s no. 28 ranking in their top 100 prospects list two years ago. Unfortunately, Carter’s game had flaws too — too many strikeouts, no clear idea what position he could play (if any), and an overall skill set that seemed one-dimensional. It’s only been 29 games this year, but Carter so far seems to have addressed those concerns. He’s trimmed his strikeout rate a bit (to a still high but not terrible 24.1 percent). He’s improved on his already strong walk rate, taking a free pass on nearly one-fifth of his plate appearances this year in Oakland. He’s shown enough glove to not humiliate himself at first base, rather than getting relegated to DH duty. And he’s mixing in some impressive opposite-field singles on tough pitches with the booming home runs we’d come to expect. All told, Carter’s hitting .267/.411/.633, with 10 homers in just 29 games.

If he keeps up anything close to this pace, his owner rightly might not want to give him up. Keep everyone else in the dark about Jason Collette’s excellent Baseball Prospectus piece showing the changes Carter’s made in his approach, and make an offer as soon as possible. You might end up with a 30-homer hitter, starting as soon as next season.

He’s already received decent playing time this season, filling in at both corner infield spots when injuries knocked out the starters. But Frazier might not top 400 at-bats this year, which should suppress his numbers just enough to keep his perceived fantasy value in check. Dig a little deeper and you see one of the best power-hitting third basemen in the game, and a player with a chance to up his playing time next season with incumbent starter Scott Rolen a free agent at year’s end. Frazier has made the most of the opportunities he’s been given, cracking 14 homers in 85 games and hitting .266/.323/.520. There’s no obvious fluky stat in play here, either, with Frazier hitting homers on about 14 percent of his fly balls this year, versus about 23 percent last year in a 41-game cameo. Dusty Baker being Dusty Baker, you’ll be sure to see a few too many starts by Miguel Cairo or a Miguel Cairo equivalent in Frazier’s stead next season. But with Rolen likely gone, 140 games and 20 homers seem like a good bet for next year; for perspective, only five MLB third basemen hit that many out of the park in 2011.

Other Opportunity Knocks Target: Wilin Rosario … but watch for some regression in his HR/FB rate

Career strikeout rate of better than one per inning, career strikeout-to-walk ratio of better than 3-to-1, pitches in the hitters’ death trap that is Petco Park … what’s not to like about Luebke? Well, there’s the little matter of Tommy John surgery and Luebke’s uncertain timetable for 2013. That uncertainty should work to your advantage, as the 27-year-old left-hander will never come cheaper. The park that’s produced solid numbers for the likes of Aaron Harang and Tim Stauffer should continue to help an already talented pitcher like Luebke once he returns. Tommy John surgery has come a long way over the years, to the point that pitchers can return and throw with velocity and command in a major league game a little over a year after going under the knife. Luebke had surgery in late May, which means he could miss as much of one-third of next season. If your keeper rules only allow for one year of protection, Luebke could be a decent late-round-caliber acquisition. If your keeper rules are looser, you could be buying a pitcher who’ll bolster your staff for years to come.