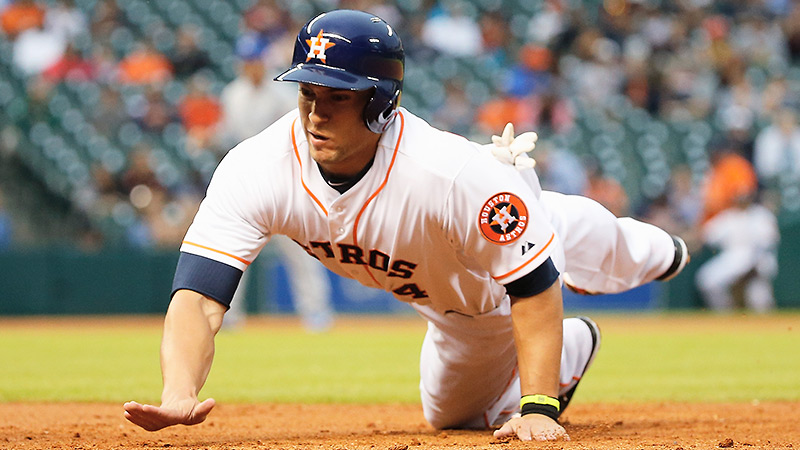 The Roster Doctor is back! Throughout the season, I’ll open the mailbox to answer your burning fantasy baseball questions, seeking truth in a sea of chaos. You didn’t disappoint with the first batch of 2014, firing a flurry of thought-provoking questions … many of which happened to be about the Astros’ latest call-up.

If George Springer had started the year in the big leagues (and it had been known that he would do so), where do you think he’d have been drafted?
—Kevin

Really high: Springer cracked 37 homers and stole 45 bases across Double-A and Triple-A last year, and even acknowledging the offense-friendly environments in which he played, those are drool-worthy figures. He projected as a potential instant star this spring, and he still does now. ESPN’s Eric Karabell wrote that if Springer had made the Astros’ roster out of spring training, he would’ve been a top-20 outfielder in late drafts, ahead of established players like Matt Kemp, Carlos Beltran, Michael Cuddyer, and others. Eric has a strong case. The only potential drawbacks I see are Springer’s high strikeout rate (he fanned 161 times in 135 games last year), which could hurt his batting average, and the general weakness of the Astros’ lineup, which could hurt his runs scored and RBI totals.

Still, it’s pretty clear that Springer was ready for the majors two and a half weeks ago. The Astros delaying his debut shows once again that MLB service-time rules are screwy and capable of undermining fan enjoyment, even though the Astros (and many other teams) have no qualms exploiting them.

George Springer was picked up before I could snag him in my h2h, daily lineup, modestly deep, very competitive league. What is your advice for stashing minor league players. I could pick up Polanco or Taveras and drop Adam Eaton right now.
—Alex C.

It’s a tricky proposition. Generally, I aggressively use my bench in deep fantasy leagues, rostering prospects who could soon get the call, but also closers-in-waiting and extra starting pitchers who can be used for streaming. Springer was good enough and polished enough to be worth rostering in all but the shallowest leagues, but so it goes.

Between Gregory Polanco and Oscar Taveras, Polanco looks like he has a clearer path to playing time this season, with his only obstacle being mediocre right fielders Jose Tabata and Travis Snider. That said, I’m not sure how deep your league is if you have to drop a potential 90-runs/25-steals guy like Eaton, who actually has a starting major league job right now, to pick up a speculative prospect. If Eaton is your worst outfielder/utility type, you can probably just stand pat. Blindly trusting prospects, even ones as good as Springer, brings great upside, but also considerable risk:

I was fortunate enough to snag Springer in free agency. I don’t have a spot for him because my utility spots are currently occupied by Brandon Belt and Matt Adams. Which of these two has the best chance to have sell-high value in a trade?
—Andrew

The correct answer is Springer. The three questions I’ve answered so far represent a mere fraction of the total number of Springer queries that poured into the Roster Doctor’s inbox this week. No matter how rational your league-mates might be, a hot prospect’s call-up tends to trigger dreams of best possible outcomes (like something close to Springer’s 37-homer, 45-steal 2013 campaign) rather than a 50th-percentile prediction (in Springer’s case, a .250ish average with some homers and steals, and slightly disappointing team-dependent stats). It might be that from now until the end of the season, Springer will be the most valuable player of the three you cited. But the gap between his perceived value and actual value is also higher than it is for Belt or Adams. Trade Springer to acquire a more established star to cover one of your weaker positions, then keep Belt and Adams for solid production at the utility spots.

I have accumulated some OF depth in a 12 team league with 3 OF and 1 UTL spot (although I have Belt and Rizzo who I sometimes use in the UTL spot depending on match ups). My OF are: Braun, Pence, Myers, Cespedes, Eaton, Springer. Who do you think could fetch the best value in a trade?  I’m wondering if it’s Myers since people will assume he’ll bounce back to ROY form, but I’m concerned about a sophomore slump. Is this a classic overreaction from 2.5 weeks or should I be concerned about Myers? (CATs: R, HR, RBI, SB, AVG, OPS)
—Dan from Canada

Every fantasy owner of Wil Myers is asking what’s going on with this guy.  So, what’s wrong with this guy?
—Chris Robinson 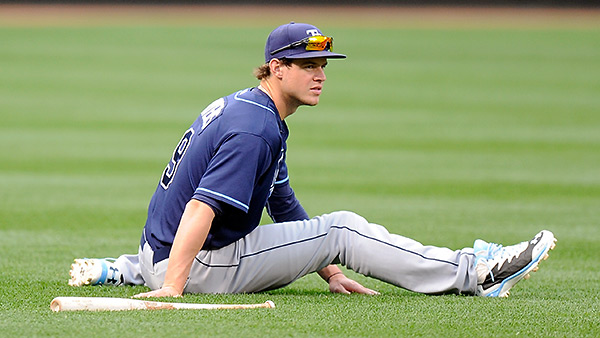 Patience isn’t an easy thing for fantasy baseball players, especially those of us in non-keeper leagues. We look at the player in whom we invested $20 or a fifth-round pick, see that he’s hitting a buck-sixty with no homers, then see the undrafted dude sitting on the waiver wire setting the world on fire, and the temptation to ditch the draft-day investment for the hot commodity can become overwhelming.

Resist the urge to make that kind of panic move, even if it’s twice as hard. By all accounts, Myers is healthy. So, what’s changed between draft day three or four weeks ago, when he was a highly sought-after pick, to now, when he’s waging war with the Mendoza Line and has just two doubles on his extra-base-hit ledger? While the sophomore slump theory might seem to make sense, the more likely scenario is that everyone’s freaking out for no good reason, because neither Myers nor anyone else on his team could hit a beach ball with a tennis racket right now. While it’s possible that Myers delivers a highly disappointing sophomore season, odds are this slow start will prove to be an aberration. Holding on to Myers is the best course of action. And hell, if the Myers owner in your league is getting antsy, offer 80 cents on the dollar and see if you can reel him in.

Is it too early to give up on Country Breakfast? Right now worms fear him more than pitchers.
—Alone and Sad at Waffle House

The Royals’ offense has been kind of a mess to start the year, with Billy Butler and Mike Moustakas being particularly bad offenders. Are they and other slow KC starters worth holding onto or am I Royally screwed?
—Dan M.

The same principle applies here. I’d try to buy low on the entire Royals roster if I could … maybe even find a friend who’d take a $20 bet on KC’s fortunes as a team from here until the end of the season.

The broader point stands: Slow starts stink in fantasy baseball and real baseball, but more often than not, they wind up looking like little blips on the map come September.

My first year playing fantasy (12 team head to head, all categories, no dynasty) and my strategy has been to fill my team with high-ceiling, low-experience players (top of my pitching staff is currently Wacha, Sonny Gray, and Yordano with Kershaw on the DL). I have both George Springer and Oscar Taveras on my roster. If I was to trade Springer or Taveras right now for an established starting pitcher, what do you think would be reasonable return for each? No pressure at the current time to make this deal as I am currently in second place in the league.
—Beau G.

Actually, I’d try to make a deal as soon as possible, second place or not. This is related to the point I made earlier about Springer: Prospects are never more tantalizing than when they first get the call to the big leagues, because at that moment, they’ve done nothing to refute the possibility, however remote, that they’re about to pull a Mike Trout or Jose Fernandez. You have the most powerful incentive to trade Taveras, because you have no idea when he might be called up; the Cardinals have no need to promote him unless one of their starting outfielders gets hurt (or Adams does, since Allen Craig would then likely shift to first base, opening a hole in right field).

Less than three weeks into the season, in a non-keeper league as shallow as yours is, you’re much better off pouncing on a pitcher who’s actually playing and producing in the majors than to play the what-if game on a guy like Taveras. What you should expect in return depends on the relative level of prospect mania in your league, but it’s worth shopping him immediately to see what the market might bear.

Should I give up all hope of Brett Gardner regularly stealing bases again?
—JJ Jacobs

This might not be quite as hasty a question or reaction as some of the others. In 2010, Gardner’s first full major league season, he swiped 47 bases in 56 tries over 150 games. In 2011, he led the league with 49 steals in 62 attempts over 159 games. An elbow injury wiped out almost all of Gardner’s 2012 season, and when he returned to the lineup in 2013, he stole far fewer bases than before and took off far less often, nabbing 24 steals in 32 attempts. In 15 games so far this year, he’s stolen two bases in two tries; at this rate, he’d again swipe 20-some bases over a full season, nowhere near the prolific pace he set just a few years ago.

So, what happened? Well, for starters, it’s hard to overlook Gardner’s age. Relying heavily on speed, defense, and walks (rather than, say, high batting average and bulging home run totals) while coming up through the minor leagues, Gardner had to compete with multiple high-salaried teammates for major league playing time, and didn’t claim his first full-time big league job until he was 26. He’s now four months shy of his 31st birthday. Thanks to research conducted by excellent FiveThirtyEight writer Neil Paine, we can see that players steal bases less often at ages 30 and 31 than players in their mid-to-late twenties, and that they take off way less often than players in their early twenties:

*Data taken from the past five years, in part to quiet potential statistical noise from the PED era.

**SBO% comes from this Ron Shandler stat, which measures how often players ran as a percentage of trips to first base.

Again, these are broad trends, and individual players certainly can and do buck trends at times. Still, with players like Gardner, Michael Bourn, and other over-30 guys who used to be steals machines, betting the under is usually the right call. If you can find someone in your league who views Gardner as a potential savior in the stolen-base category, you might want to open those trade talks now.

Triangle All-Stars: The Final Roster for the People’s Dream Team