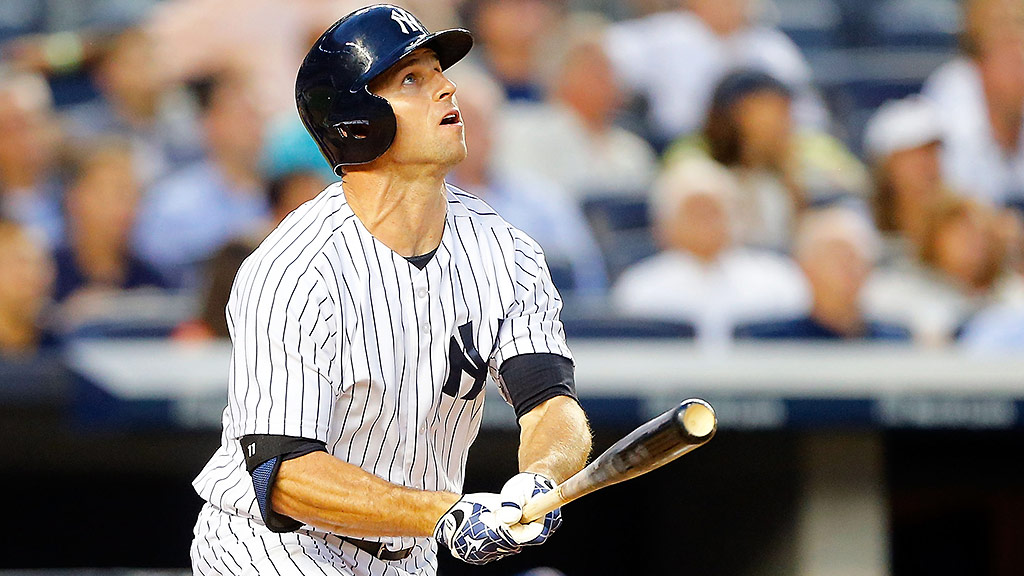 When Brett Gardner first arrived in the majors, I knew him as the one Yankee who didn’t scare me when he came to the plate. He was fast, and because of his haircut and the fact that his batting helmet always looked a few sizes too big, I always thought he seemed like he should be working on the Death Star.

But Gardner has been a pretty good player for a while now. He missed almost all of 2012 with an elbow injury, but he’s on pace to play at least 145 games, qualify for the batting title, and produce four or more WAR for the fourth time in five seasons.

These days, though, he’s doing things a little differently. Pre-injury Gardner was a pretty interesting combination of speed, defense, and plate discipline, good for a mid-.300s OBP, about 45 steals per year, and the best left-field defense in the free world. Considering that at that time he was younger than 30 and wasn’t yet making $12 million a year, Gardner was a perfect complementary player for the Yankees.

Present-day Gardner is a bit of a different breed. The advanced defensive metrics don’t love Gardner as much as they used to, and while he’s still stealing bases at a good rate, he’s not swiping as many bags as he did in his youth.

The big difference, though, is the power. Last year, Gardner set new career highs for wOBA, isolated power, and slugging percentage, and he’s on track to blow all of those marks out of the water this season. Since debuting in 2008, Gardner has hit 38 home runs — 12 of which have come in the past two months. He’s gone from being a finesse player to being Reggie Jackson.

Some of that newfound pop stems from an intentional change in approach. The section on Gardner in this year’s Baseball Prospectus Annual focused on the new hitting approach Gardner was working on under the instruction of Kevin Long, which was aimed at making Gardner more aggressive. It seems to be working. Here, courtesy of FanGraphs, are Gardner’s swing rates from 2010 and 2011, when he was one of the most selective hitters in the game: 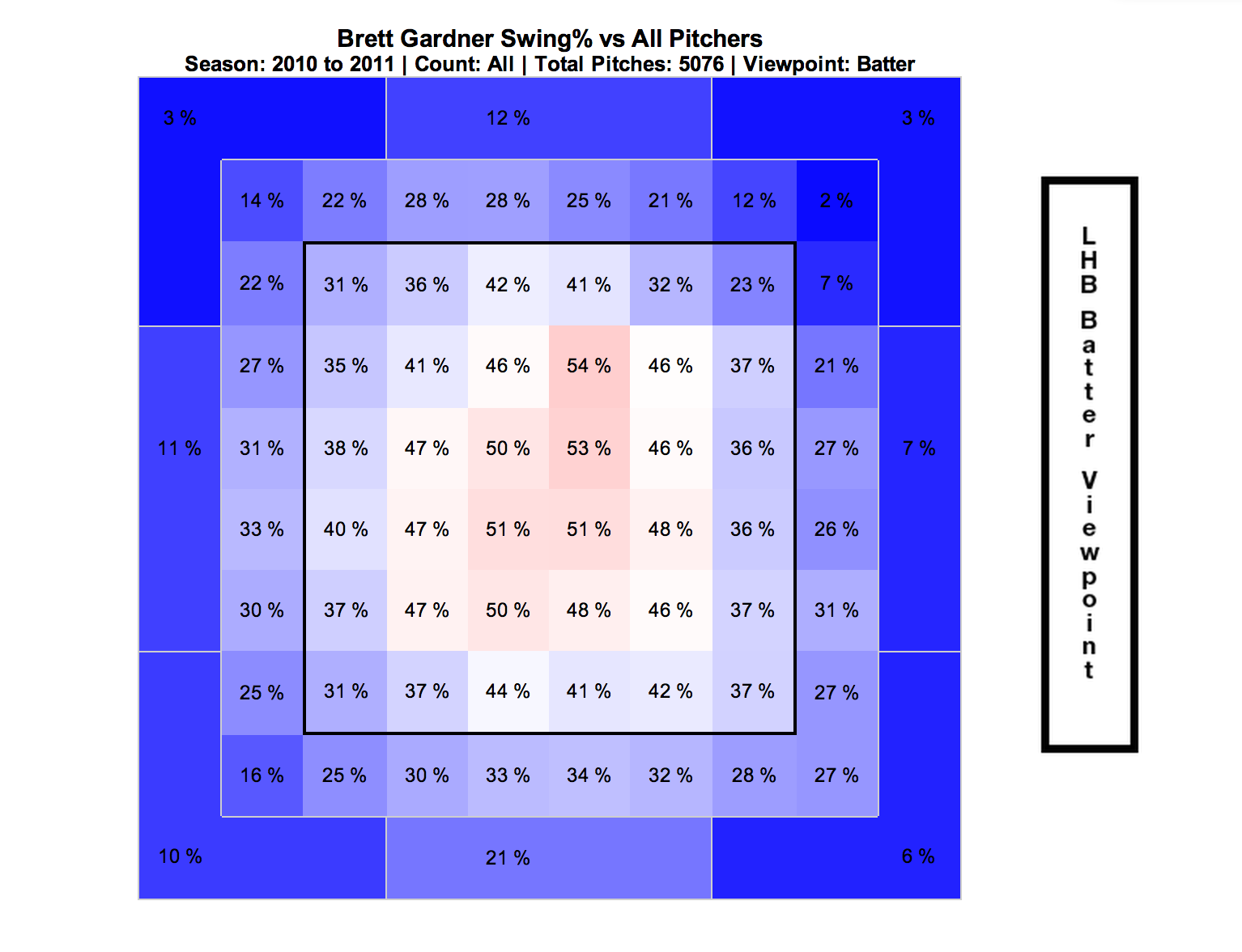 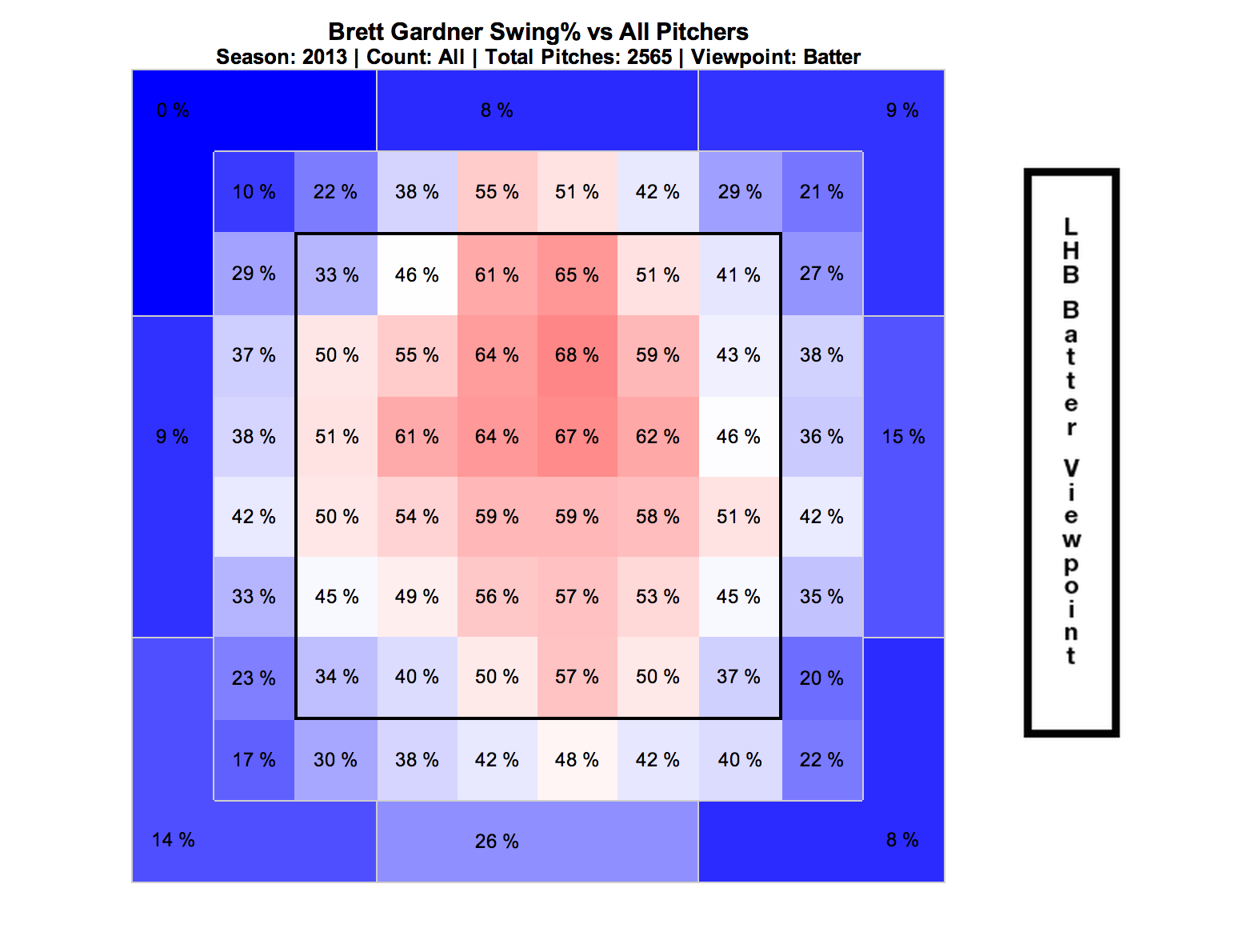 And here’s the same graph with data from this year: 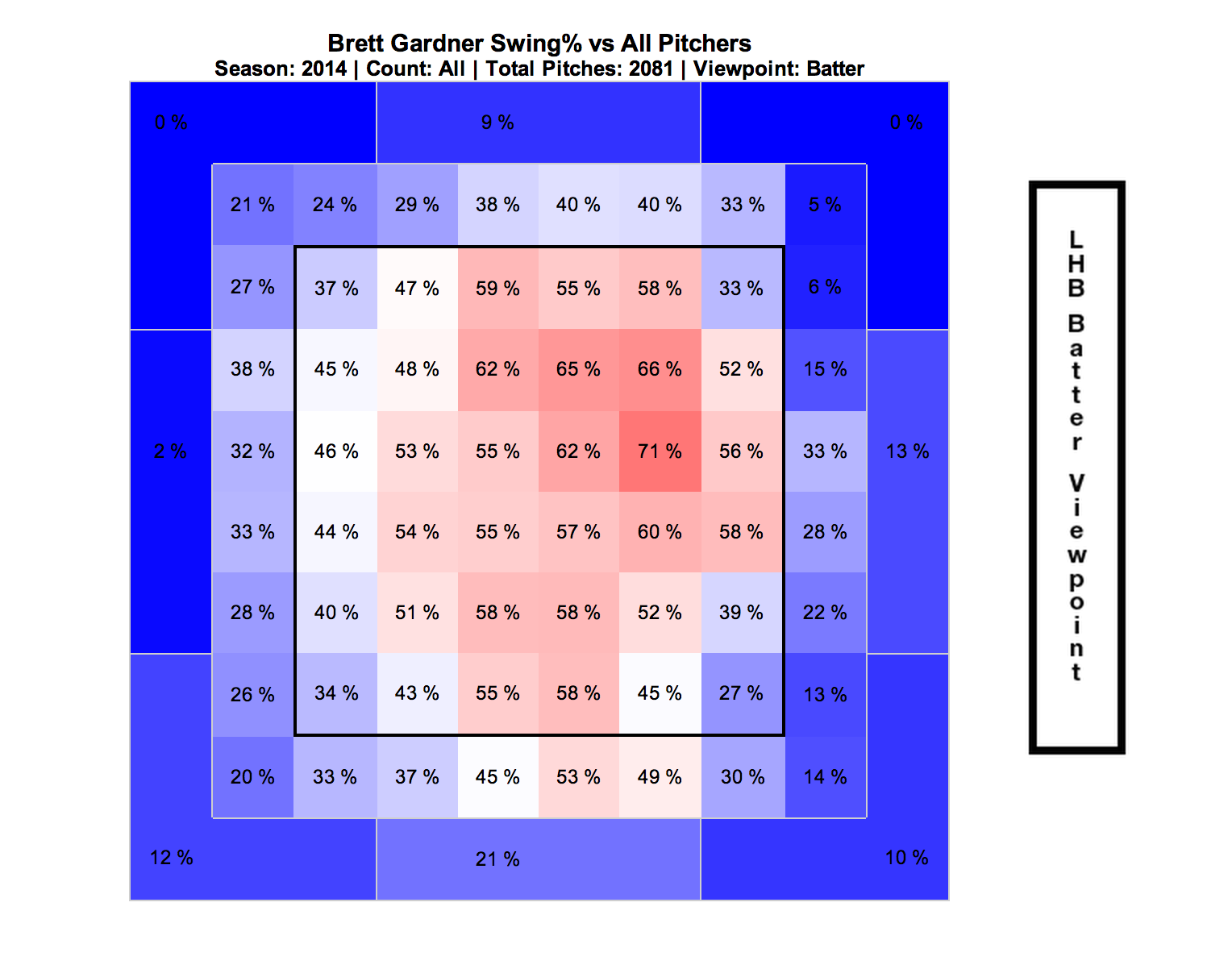 Gardner has gotten more aggressive, particularly within the strike zone, and particularly on pitches on the inside part of the plate. That lines up with the power spike: Every home run Gardner has hit over the past two years has been pulled out to right or right-center. 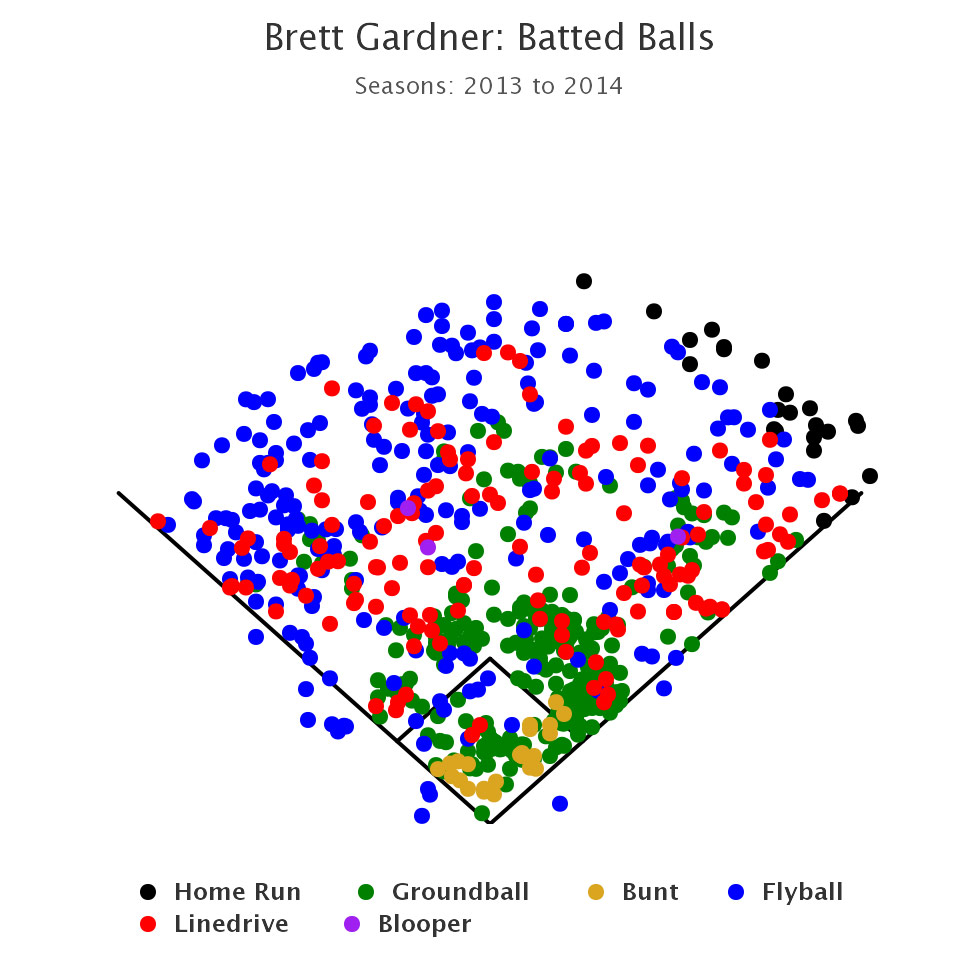 Gardner’s far from the only player to experience a power surge after deciding to get more aggressive in the strike zone; last year, Domonic Brown, who’d been famous above all else for his selectivity, cut walks out of his game entirely for a few weeks early in the year, but benefited by hitting a home run, it seemed at the time, every night for about two weeks. Gardner hasn’t made quite the same sacrifice: While he’s walking less over the past two years than he did early in his career, his 10.1 percent walk rate is in line with his career average.

The biggest change in Gardner’s peripherals is in the distribution of his batted balls. In 2010 and 2011, 52.8 percent of the balls Gardner put in play were on the ground, the 10th-highest mark among qualified hitters in that time. That might seem like a bad thing for a hitter, because we tend to like pitchers who induce a lot of ground balls, which rarely go for extra-base hits and often lead to double plays. That’s not always the case with hitters, though: For hitters, ground balls turn into hits more often than fly balls do. And for lefties with limited power but good speed, a lot of would-be ground ball outs could turn into singles and avoid being double plays. And sure enough, most of the other players near the top of that ground ball rate list are similar to Gardner: Denard Span, Michael Bourn, and to a certain extent Juan Pierre and Elvis Andrus. Those guys can beat out enough balls to maintain a .340 BABIP without grounding into an inordinate number of double plays: Gardner’s been doubled up only 24 times in his career, which is a bad weekend for Billy Butler.

Over the past two years, however, Gardner’s ground ball rate has dropped to 42.2 percent, 76th in the majors, and he’s replaced about half of those lost grounders with line drives. Line drives turn into hits, just like your Little League coach told you, and fly balls are more likely to turn into outs, but they both also turn into extra-base hits more often. Gardner delivered a career-high 51 extra-base hits last year, and he’s got 37 on the board with two months to go in 2014.

That’s about as far as the statistical evidence of Gardner’s change in approach takes us. I actually find the kind of player he was before extremely entertaining, and most of the mediocre-to-above-average position players I find myself liking more than most people — Jackie Bradley Jr., Matt Dominguez, J.J. Hardy — share some of the characteristics that made Gardner so interesting. But as his glove and legs have slipped, Gardner has been able to hold off backsliding in value thanks to his newfound power. He’s got 15 home runs already this season, so the next question is this: Is he going to continue on that trajectory? Are 20 homers in the cards next year?

Baseball is so unpredictable that I wouldn’t say it’s impossible, but it is unlikely. We all know BABIP and HR/FB ratio are two major determinants of luck for pitchers. That’s true to a lesser extent for hitters, who have more control, in the aggregate, over where batted balls go and how far they hit those balls. But absent some obvious mechanical change, a one-year or one-month spike in either is probably an aberration.

The league-average HR/FB rate is around 10 percent. Gardner’s career high was 6.3 percent. This year? It’s 15.3 percent, higher than Yasiel Puig’s, Jay Bruce’s, Hunter Pence’s, and Albert Pujols’s. You know, the big, power-hitting types, not the people who usually wind up with similar batted-ball profiles to Span.

Take the data month by month and it looks even flukier. Since his home run spike started, Gardner has posted HR/FB rates of 16 percent in June, 26.9 percent in July, and 25 percent so far in August. I’ve heard of Occam’s razor, and I suspect that at least most of whatever is making Gardner hit like The Mighty Giancarlo Stanton will go away at some point.

Until it does, though, Yankees fans should enjoy the ride. Fluke homer rate aside, Gardner has undergone an interesting career reinvention over the past 18 months. Plus, New York is going to need all the offensive help it can get.