No Pale Imitation: How Jose Abreu, Adam Eaton, and a Savvy GM Have Revived the White Sox Offense 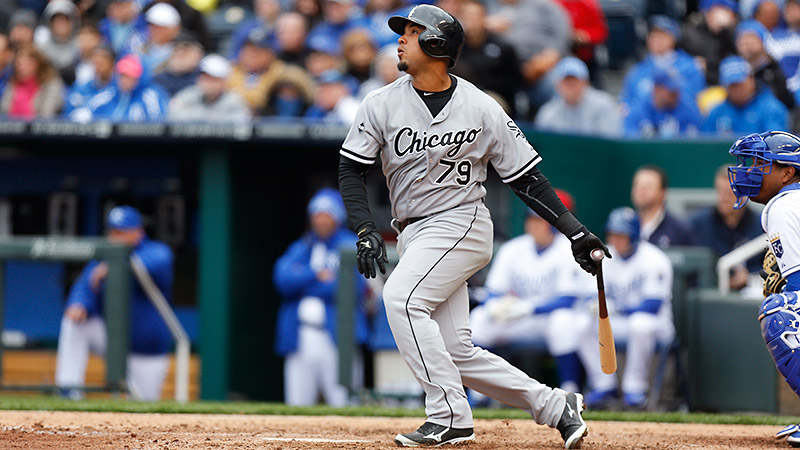 Heading into the bottom of the eighth inning of Sunday’s game against the Indians, the White Sox were on the verge of something they’d hardly done all season: fail to score runs.

On a long, damp, dreary afternoon that had already brought two rain delays totaling two hours, and with Cleveland starter Corey Kluber still toeing the rubber, the White Sox and Indians were locked in a 1-1 tie. Only once in the 12 prior games had the Pale Hose scored so few runs in a game, and only twice to that point had they scored three or fewer. The Sox were the highest-scoring team in baseball, and such offensive ineptitude seemed unlikely to last.

Turns out, it didn’t. With one out in the eighth, rookie second baseman Marcus Semien worked the count full, got a fastball middle-in … and launched a laser that soared over the left-field wall and landed seven rows deep in the bleachers to put the Sox up, 2-1. Closer Matt Lindstrom blew the game to put the Sox behind again, 3-2, but they weren’t finished. Jordan Danks led off with a walk, then promptly stole second. Alejandro De Aza fouled out, bringing Alexei Ramirez to the plate. The first pitch from Indians closer John Axford was a fastball up and also middle-in, and this is what happened:

Ramirez’s game-winning, two-run bomb improved Chicago’s record to 7-6, an impressive start following the team’s disastrous 99-loss 2013 campaign. After beating the Red Sox on Tuesday night in an uncharacteristically low-scoring affair, the White Sox are now 8-6. More amazingly, Ramirez’s walk-off blast helped sustain the club’s early run for the record books. While we’re only 14 games into the season, and while plenty of wacky things can happen over such a small sample of games, it’s still impossible to ignore that the 2014 White Sox currently have the most improved year-over-year offense in modern MLB history.

One of the best ways to measure offense is with a stat called Weighted Runs Created Plus, or wRC+. Though the name sounds complicated, the formula is simple: Take every outcome generated by a batter (singles, doubles, triples, homers, walks, etc.), then adjust for park effects to ensure that the hitter toiling at Petco Park gets a fair shake compared to the batter getting fat off Coors Field. After making that adjustment, compare the team or player result to league average. One hundred is an average score, 110 is 10 percent better than average, 90 is 10 percent worse than average, and so on.

The 2014 White Sox currently lead the majors with a wRC+ of 125, meaning their offense has been 25 percent better than league average. Last year, the Sox posted an 83 wRC+, the second-worst in the majors, ahead of only the woeful Marlins. That swing represents the biggest year-over-year improvement by any MLB team since 1900:

This data comes from FanGraphs and includes pitchers’ hitting stats. The presence of the 2014 Nats and 2014 Yankees further demonstrates the aberrant results that can show up when dealing with small sample sizes. But small sample or not, few could have foreseen the White Sox hitting this well this soon after last season’s woes.

When Rick Hahn succeeded Kenny Williams as the team’s general manager in October 2012, Hahn inherited a team that was simultaneously successful and primed for collapse. The Sox won 85 games in 2012, finishing just three games behind the division-winning Tigers while posting a better run differential than Detroit thanks in part to the 10th-best offense in the majors. That season, however, was the last gasp of success for several White Sox veterans. Catcher A.J. Pierzynski, 35 at the time, posted the best numbers of his career in 2012, setting career highs with 27 homers and a .501 slugging percentage. He took the free-agent route in 2013, hitting 10 fewer homers and losing .076 off his slugging mark, while his White Sox replacement, Tyler Flowers, hit .195. Paul Konerko, then 36, fought against the dying light in 2012, hitting .298/.371/.486 and making his sixth All-Star Game; in 2013, he hit just .244/.313/.355 with 12 home runs, making him one of the least productive first basemen in the game.

Their departures and declines marked the end of an era for a franchise that had leaned heavily on veterans like Jim Thome, Jermaine Dye, Pierzynski, and everyone’s favorite, Paulie, for years. Hahn knew that winning 85 games on the backs of last-gasp thirtysomethings as the Sox did in 2012 wasn’t a sustainable model, and that he’d need to alter the approach in order to return the team to the form that led to the 2005 World Series crown. Unfortunately, the all-in approach Hahn’s predecessors favored, plus years of poor drafts, had produced Baseball America’s no. 29 farm system entering 2013.

Telegraphing his intention to be patient and treat 2013 as a wait-and-evaluate season, Hahn resisted the urge to make any major acquisitions during his first hot stove season as GM. As a result, the White Sox didn’t have anywhere near enough talent to compete for a playoff spot last season. So instead of adding, Hahn started subtracting. The White Sox sent Jake Peavy to the Red Sox as part of a three-way deal on July 30, netting a package led by talented but raw outfielder Avisail Garcia in return. Ten days later, the White Sox shipped Alex Rios to the Rangers for B-level prospect Leury Garcia. Though Hahn hoped to strike gold with both Garcias, ditching millions in salary while clearing roster space for younger talent was key in both trades.

With that year of evaluation in the books, Hahn struck with three offseason moves.

First, he reeled in Cuban slugger Jose Abreu, sending shockwaves through the industry. When a high-profile free agent goes up for bid, few expect the White Sox to emerge as leading contenders, but in this case, the stars aligned perfectly. Typical big-revenue bidders like the Dodgers (Adrian Gonzalez), Red Sox (David Ortiz, and a desire to re-sign Mike Napoli), and Yankees (Mark Teixeira, and a desire to keep the DH spot open and flexible) didn’t have holes at Abreu’s position. Plus, Abreu was considered a boom-or-bust commodity. Some saw the immense power and ludicrously gaudy numbers he displayed in Cuba and projected immediate stardom; others saw a huge man with slow feet, limited defense, and a long swing, and wondered if we might be witnessing the second coming of Steve “Bye Bye” Balboni. Hahn took the plunge anyway, figuring that a six-year, $68 million contract would represent a fair purchase by today’s standards if Abreu wound up being a decent power hitter who could stay healthy, and a total steal if he wound up replicating anything close to the video-game numbers he’d managed while playing back home.

With Abreu locked up, the Sox hit the trade market. On December 10, they snagged 25-year-old center fielder Adam Eaton from the Diamondbacks in a three-team deal. Six days later, they hooked up with the D-backs for another trade, picking up third baseman Matt Davidson, now 23. Neither Eaton nor Davidson were sure things. Eaton was a former 19th-round selection who hadn’t always been a scout’s favorite and who’d struggled with injuries, including an elbow sprain that cost him 89 games in 2013. Davidson came with a better pedigree as a sandwich-round pick in 2009, but he was a below-average runner and defender with little speed. Still, Hahn couldn’t pass up the chance to acquire them both.

In Eaton, the Sox were getting a young, athletic center fielder who possessed a good batting eye, excellent speed, and superior defensive skills and also offered five years of team control. Davidson, meanwhile, was pegged as a big power prospect who could smash enough balls out of the yard to more than make up for the holes in his game. For a team that needed to completely overhaul its lineup, these were chances well worth taking. And considering the Sox only had to give up a back-of-the-rotation starter with command issues in Hector Santiago, a minor prospect in Brandon Jacobs, and a decent-but-not-great closer in Addison Reed, Hahn had to pull the trigger.

The results so far have been nothing short of spectacular. Eaton has looked like the perfect leadoff man, hitting .321/.418/.464 with identical strikeout and walk rates, a great sign for a burgeoning OBP hound. He’s also flashed the leather, giving the White Sox a double defensive boost by pushing De Aza to a corner spot, thus effectively giving the club two starting center fielders. Meanwhile, Abreu has crushed balls so far that nearby blimp pilots have to be getting nervous; his two-homer performance against the Indians marked the second time in three games that he’d gone deep twice in one night. Davidson began the season in Triple-A and is scuffling a bit, but Eaton and Abreu have more than made up for that. Their performances, coupled with hot starts for Ramirez, Flowers, Conor Gillaspie, Adam Dunn, and Dayan Viciedo, have the White Sox off to a world-beating offensive start.

Now, for the caveats. Ramirez, the hottest Sox hitter of all, has flashed a line of .415/.466/.660 this year. It’s theoretically possible that after six years of mediocre offensive results, Ramirez has suddenly become Rogers Hornsby at age 32. But the smart money is on this being a gigantic fluke; Ramirez’s walk-off homer on Sunday ran his line for the afternoon to four first-pitch swings in four at-bats, an approach any Little League coach could neutralize before long. Gillaspie hitting .311 all year and Flowers managing a .600 batting average on balls in play are about as likely as Hawk Harrelson extolling the virtues of wRC+ on a Sox broadcast this season. And those three aren’t the only Chicago players likely to come down to earth.

The harsh reality is that this White Sox offense probably won’t resemble the 1927 Yankees’ unit for much longer. The bullpen will also probably blow a bunch more leads, because Hahn wisely recognized that dumping tens of millions of dollars into relief pitching is rarely a good idea, and is damn near pointless for a team that’s still rebuilding.

Still, for the first time in a while, Sox fans can start getting excited. Even if the offense cools, there’s a good chance the team has found its top-of-the-order catalyst and middle-of-the-order masher for the next half-decade in Eaton and Abreu, respectively. The Sox have one of the best pitchers alive signed to one of the best contracts in the game in Chris Sale. There’s some more intriguing young talent already on the major league roster in Semien and pitchers Jose Quintana and Erik Johnson. Garcia may be injured this season, but he’s only 22, and he looked fantastic before hurting his shoulder. And the farm system’s starting to look better, with a combination of promising late-round picks and a couple of high-upside trade acquisitions offering hope for 2015 and beyond.

When it comes to the future of South Side baseball, you can look up, put it on the board, and, YE-ESSS, enjoy this offensive explosion for as long it lasts.

The Milwaukee Bucks will announce later Wednesday that longtime owner Herb Kohl has reached an agreement to sell the team to hedge-fund billionaires Wesley Edens and Marc Lasry for a purchase price of $550 million, according to sources familiar with the transaction.