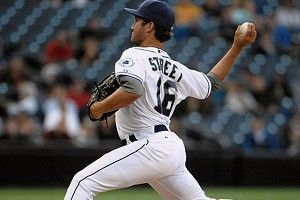 We’re five weeks away from MLB’s trade deadline. Close enough to start making fantasy roster decisions with that in mind, far enough that your competition might not pick up on what you’re doing.

You don’t want to overreact to scenarios that may or may not happen, of course. But getting full value now for players who might be affected by pending trades (or other factors) surely beats getting next to nothing for them a month from now.

With that in mind, here are some strategies to consider as we near the season’s halfway point, and the players who could be affected.

There’s a reason closers from top teams go higher on draft day than those on also-ran teams: job security. Rafael Betancourt and Huston Street might own better core skills and statistical track records than all but a few stoppers. But the Rockies and especially the Padres came into this season with modest hopes for playoff contention. That means you might get three and a half months of saves, followed by a trade to a contender that turns someone like Betancourt or Street into an overqualified setup man (for fantasy purposes, that is … saving your best pitcher for two- and three-run leads with the bases empty and the bottom of the order coming up isn’t an optimal strategy).

Betancourt (9.4 K/9, 2.3 BB/9, 2.66 FIP): Should be an obvious trade candidate for the Rockies, given they’re 17 games under .500. But GM Dan O’Dowd has waved away suggestions of trading Betancourt as well as expendable veterans like Michael Cuddyer. Could be gamesmanship, but might also be a wrongheaded belief that another Rocktober miracle is coming. Not quite as urgent a sell for fantasy purposes as some others.

Street (11.5 K/9, 3.0 BB/9, 1.50 FIP): The Padres seem more likely to be aggressive sellers, given their past tendencies vs. those of a team like the Rockies. In Street’s case you have the added impetus of a pitcher who’s a walking injury time bomb and is also owed nearly $4 million for the rest of this season. Plus the Padres always seem to have good relievers growing out of their ears, to the point that they shipped shutdown righty Ernesto Frieri to the Angels earlier this season. If you’re a Street owner, getting 90-95 cents on the dollar would be an acceptable outcome.

Brett Myers (6.2 K/9, 1.7 BB/9, 3.86 FIP): His name first came up in trade rumors weeks ago, and Jeff Luhnow and company seem committed to tearing down for the long haul. Myers also isn’t a particularly great pitcher, lacking the swing-and-miss stuff that makes for an elite closer. Sell ASAP.

We’ve heard, again and again, that the Nationals intend to limit Stephen Strasburg to 160 innings this season. The guy who might be the best pitcher in the National League hasn’t made it through the eighth inning once this year despite dominating multiple opponents, so the Nats are obviously doing their best to holster their once and future ace. But if Washington stays in the playoff hunt all year, how tempted will the Nats be to push forward with their main man? Strasburg might be the only notable pitcher to have that specific a cap placed on his workload this year. But several pitchers — converted relievers, rookies, and other young arms — might get the kid-glove treatment in the second half too. They include:

Strasburg (11.8 K/9, 2.3 BB/9, 2.20 FIP): You can’t sell low here; Strasburg’s just too good. But if a league-mate comes dangling Andrew McCutchen? Or a no. 2 starter combined with a very good hitter? Given the circumstances, you have to listen.

Chris Sale (8.9 K/9, 2.3 BB/9, 2.58 FIP): We covered Sale and other potentially workload-impaired pitchers in last week’s fantasy column. Though Sale hasn’t had a hard innings limit imposed on him (at least not publicly), he has reached a career high in innings pitched, and we’re not even in July. Again though, that doesn’t mean the rest of your league is thinking along the same lines. Odds are there’s at least one guy who simply needs pitching and is drooling over Sale’s numbers. Market Sale if you like, but don’t pull the trigger unless the rewards are great.

The trickiest trade to pull off, given how tough it is to predict an interleague deal, but also a crucial one if you’re in an NL- or AL-only league with strict roster rules that force you to drop a player who gets traded to the other circuit. The Cot’s Baseball Contracts page, featured on Baseball Prospectus, is an invaluable resource for perusing player contracts and the implications therein. High-salaried players on non-contenders are strong candidates to be traded. Certain skill sets make such players even more likely to be flipped out of league — one-dimensional sluggers languishing on NL rosters who’d be better suited for DH duty, for instance. A few of those possibilities include:

Carlos Lee (.295/.350/.419): Lee’s not nearly the hitter he used to be, with just five homers this season. But the Astros will be highly motivated to move him (even if it means covering most or all of the $9.5 million he’s still owed), given that Lee is in the walk year of his contract and Houston would surely prefer giving playing time to younger players. Losing Lee due to a trade to an AL team wouldn’t be the end of the world. But if you can make him, say, the sweetener in a larger deal, do it.

Alfonso Soriano (.270/.330/.486): More power than Lee at this stage (14 homers, .216 ISO), but also much tougher for the Cubs to move, given that Soriano is owed $18 million a year in 2013 and 2014. Jed Hoyer and Theo Epstein don’t sweat sunk costs as much as some other executives might, though: Even if there’s no trade market for Soriano, the veteran left fielder might grab some second-half pine as younger players get more playing time. Sell ASAP.

Whether these and other players (Francisco Liriano, Jeff Francoeur, Casey Janssen, etc.) get traded or not will depend on management’s willingness to pack it in, and in the case of players like Hamels and Greinke, their stomach for a true blockbuster deal. Aces like Hamels and Greinke would likely succeed anywhere, so between that and the uncertainty of the Phillies and Brewers pulling the trigger, you might be getting too cute by making a deal to avert player losses to the AL. Still, selling high is rarely a bad strategy in fantasy. If the rest of your league covets Encarnacion and his unprecedented power binge, shop him. Even if there’s only a slight chance he changes leagues, can it really get much better than a 45-homer pace?