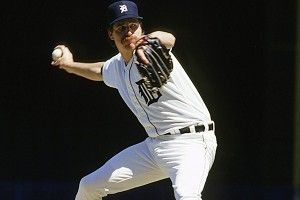 With all the attention paid to R.A. Dickey and his fantastic knuckleball this season, I couldn’t help thinking back to when I was a kid and we all tried to throw knucklers. Some of us managed to throw pitches with no spin (my trick was throwing sidearm), but none of us could get it to move and dance. I tried to throw one in a game once, dipping low into a sidearm motion, and the pitch, high and slow, got absolutely crushed at the plate. “What the hell are you doing?” my coach yelled from the bench, and that was the end of the knuckleball experiment.

But there was another pitch, too, even more bizarre, called the forkball. To throw the fork, we held it between our index and middle fingers, splitting them wide so the ball was jammed in between. As you can imagine, this pitch did … nothing. It was impossible to control or throw for any accuracy, and it came out slow and high. There were at least a few times, playing catch, when it was wedged so tightly that it actually stayed between my fingers when I meant to release it. I don’t think any of us had a clue what a forkball was supposed to do, or why it was invented.

I thought of the forkball recently, and was dismayed to find on Fangraphs that nobody has thrown even one this year. Not one? There’s no R.A. Dickey of the forkball? There had to be a savior, right? The knuckle-curve has A.J. Burnett. Even the eephus pitch is preserved, by Randy Wolf. At first glance, I found only two pitches that haven’t been thrown in the majors this season: the forkball and the screwball.

It turns out that their absence stems from a similar cause: They kill arms. With the screwball, the mechanics of this danger are obvious; you have to wrench your arm in the opposite direction, starting at the elbow, to impart a reverse-slider spin, which is unnatural and dangerous. Here’s a video of Daniel Ray Herrara explaining the pitch from 2009, when he played for the Reds. Herrara, who now plays in Triple-A for the Mets, is essentially a freak of nature whose elbow and wrist are flexible to cringe-inducing degrees.

But the forkball, it turns out, is also a quick path to pain. It may have been invented by “Bullet” Joe Bush in the dead-ball era, was popularized by Elroy Face, and was used recently by pitchers like Jack Morris, Dave Stewart, and Hideo Nomo. It’s slower than the split-fingered fastball, but, when thrown properly with a snap of the wrist, has a sharp break like a curve.

But having the fingers split apart puts stress on the elbow, which led to a rash of injuries among forkball pitchers. Even the split-fingered fastball, which is a modified version of the forkball in which the ball isn’t jammed quite so deep and the fingers aren’t quite so wide, is falling out of favor due to the injuries it creates. As a New York Times piece revealed, several major league teams actively discourage young pitchers from developing a split-finger in order to save their arms. Fangraphs reveals that the anti-splitter campaign has worked; only 54 pitchers have thrown a split-finger fastball this year; only 12 among qualified starting pitchers (Dan Haren uses it to greatest effect). And if the split-finger is falling from grace, imagine what coaches and managers think of a forkball. No way. Out of the question.

Still, despite the danger, I was dismayed to find that the forkball was dead. Esoteric history like that should never die, not completely. But then I realized a small error — on Fangraphs, I’d forgotten to set the minimum innings pitched to zero. Sure, no qualified pitchers had thrown the fork, but maybe there was someone, some minor figure, who carried the torch. I made the necessary changes, and hoped for a hero …

And Brian Sanches came through. Sure, the 33-year-old has only pitched four innings for the Phillies in relief this year, and sure, he’s now with the Lehigh Valley IronPigs, but none of that matters. When I checked his Wikipedia page, there it was, one sentence in all its glory: “Sanches uses a slider as his main off-speed pitch, and he also throws the forkball to righties.”

For those who don’t understand the great service Sanches is doing for the game of baseball and its history, this will probably endure as his most famous moment of the season:

But the rest of us know. For our enlightened kind, here’s Brian Sanches in one of just two career starts, last year against the Dodgers. He finished with three scoreless innings in a game the Marlins would win 6-1. At the 30-second mark, James Loney swings at a 2-2 pitch that looks like a slow fastball, only to flail as it dives to the dirt. And that, my friends, is the forkball. Keep the flame alight.

Watch Mario Balotelli Score His Goal Against Germany … Before It Even Happened!