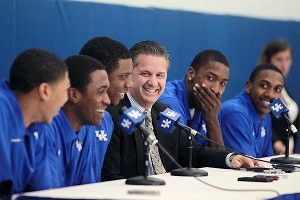 1. Kentucky’s Starting Five: DEUCES
It would be easy to be flippant about the starting five on Kentucky’s national championship basketball team all declaring for the NBA draft, in unison, on Tuesday. You could mock coach John Calipari for building his program around one-and-done players, you could raise an eyebrow at noted NBA power broker World Wide Wes’ presence at the NCAA tournament final as an obvious UK fan. Or you could just see the shared elation on the faces of Anthony Davis, Michael Kidd-Gilchrist, Terrence Jones, Doron Lamb, and Marquis Teague, and let these guys live a little. I defy you to read this Kidd-Gilchrist quote and begrudge these guys a single thing in life: “I want to spoil my mom. I think I’m going to spoil my mom to death. That’s one thing I’m looking forward to.” They earned it. All of them.

2. Proponents of Goal-line Technology in Soccer: GOOOOOOOAAAAALLLLL?
Brian Phillips would like to point out Juan Mata’s goal/not a goal in the FA Cup semifinal between Tottenham and Chelsea, because somehow in the world’s biggest sport we are still relying on guesswork. Just ask Frank Lampard!

3. Keith Moon: Still Dead
Sarah Larimer won’t get fooled again: “Sorry, World. Keith Moon will not be playing at the London Olympics. You know, because he’s not alive. After London Olympic organizers extended the late Who drummer an invite to the Games, Moon’s former manager explained: ‘I emailed back saying Keith now resides in Golders Green crematorium, having lived up to The Who’s anthemic line “I hope I die before I get old.” If they have a round table, some glasses and candles, we might contact him.’ Amazing.”

4. The New Steelers’ Throwback Uniforms: Fashion-Forward
Throwback to what, exactly? When the earth was ruled by bees?

6. Deron Williams: Talent Evaluator
When asked how he felt John Wall was progressing in his second year with the Washington Wizards, the (if only temporarily) New Jersey Nets point guard said, “I don’t want to put anybody down, but he’s not playing with the smartest guys in the world.”

7. Elena Kagan: Putting the “Law” in Keith Law
Why won’t the Supreme Court Justice let David Wright be great? From a Supreme Court ruling (about a pharmaceutical company) (I think) (I left my law degree in my other pants) released on Tuesday: “The meaning of the phrase turns on its context. See Johnson v. United States, 559 U. S. ___, ___ (2010) (slip op., at 5) (“Ultimately, context determines meaning”). “Not an” sometimes means ‘not any,’ in the way Novo claims. If your spouse tells you he is late because he ‘did not take a cab,’ you will infer that he took no cab at all (but took the bus instead) … And if a sports-fan friend bemoans that “the New York Mets do not have a chance of winning the World Series,” you will gather that the team has no chance whatsoever (because they have no hitting).”

8. A.J. Ellis: Triple Player
The Dodgers catcher started a real keep-your-head-on-a-swivel play to get the Padres all out, all at once, on Sunday.

9. Gordon Hayward: Ice in His Veins
But as to what is in his ears, you’ll have to ask Delonte West. Seriously, I feel like, all things being equal, Gordo handled this … pretty well? Is there an obvious reaction to have when Delonte West gives you a “wet willy”? “I wanted to fight right there, but you can’t do that,” Hayward said. Cooler ears definitely prevailed here.

10. Vince Wilfork: Super Sanchize Him
When asked who he thought should start for the Jets at quarterback next season, the Patriots’ defensive lineman had a very simple answer: “ Tebow.” What’s up, Mark?