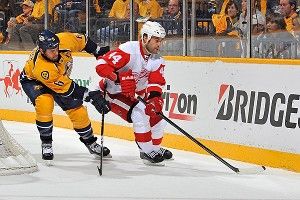 We had some questions about the NHL playoffs, and because we only have like three friends who are actually watching every game of said playoffs (and they are probably pretty sick of our e-mails by now), we turned to Grantland’s resident hockey fan, Katie Baker. Please take it away, Katie:

The Canucks and the Penguins could be eliminated with losses Wednesday. Which collapse do you find more surprising?

The Penguins. It’s not that I necessarily assumed they would win — I thought it would be a back-and-forth slog of a series and Philly definitely had a chance — but I was NOT expecting them to just completely unravel. Evgeni Malkin, who scored 50 goals this season, has been almost invisible. Marc-Andre Fleury has melted down — the best stat I read was from TSN’s Scott Cullen, who said if Fleury had even a .900 save percentage (which isn’t even good by playoff standards) it would have been good for nine fewer goals against Pittsburgh in three games. It’s just gotten so ugly so fast, and I don’t think anyone saw it coming.

Which teams are your favorites to win the Cup after seeing some first-round games?

When people ask who I’m rooting for, I say that I just want every series to go seven games and end in overtime. (As long as the Rangers win all their Game 7s, obviously.) Anyway, earlier I answered this question and wrote that I’d give a good shot to whoever gets out of the Detroit-Nashville series. After Tuesday night, it looks like that will be the Predators. But if Jonathan Quick keeps playing the way he has it’ll be a huge asset to the Kings now that they’re scoring goals again. I’d secretly love to see a Kings-Philly Cup finals for the storylines alone.

Fighting in this year’s playoffs … discuss.

The fighting gets conflated, I think, with the more pressing and clearly-bad-for-hockey issue: The really dangerous and disrespectful hits and the inconsistencies with which the league addresses them. I’m actually hopeful that because this first round has been so hectic that it’s going to give the NHL the balls to be tougher and more clear in defining and enforcing what it is they want and don’t want. (More likely they’ll just muddle everything further.)

Please provide a clip and/or quote of your favorite post-game interview.

That’s easy. Ilya Bryzgalov, “Why You Heff to Be Mad?” A modern classic.

Is there a grosser tradition than the Panthers rats? Because seriously, it weirds me out, and I think it’s probably worse than the octopi.

I just think about how there’s got to be some live ones in there, right? Because Florida has a lot of snake owners, I’m sure, and the idea of real rats either splatting or scurrying around on the ice … so gross. In Nashville the other day, someone threw down a catfish, and it really riled up octopus-tossing Detroit fans who saw it as intellectual property theft by the nouveau riche — next time the two teams are playing, do a Twitter search for “nashville” and “hillbillies” and you’ll see what I mean.

See all Ask a Nerd