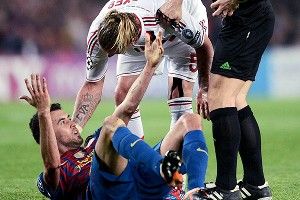 When Pep Guardiola took over as manager for FC Barcelona in 2008, he brought a little-known gangly 20-year-old midfielder named Sergio Busquets with him from the Barcelona “B” team. At first he appeared surplus to requirements, as the team was already well served in his position with experienced internationals Yaya Touré and Seydou Keita. By the end of the season, Busquets had played so well that the team sold Touré to Manchester City and Keita moved to the periphery. Busquets has been lauded by his teammates, with defender/midfielder Javier Mascherano calling him “the perfect player” and Spain national team coach Vicente Del Bosque saying, “If I was reincarnated as a footballer, I would like to be like Busquets.” While Lionel Messi, Xavi, and Andrés Iniesta deservedly get most of the credit for Barcelona’s historic run (13 trophies since Guardiola took over as manager), a good portion of the team’s success can be attributed to Busquets’s quick passing and effortless transition play, helping Barca go from defense to attack. But Busquets is also an accomplished cheater who lives to get opponents red carded and win questionable penalties. He is a full embodiment of the club, both sides of the Barcelona coin.

Conversations about Busquets often center on his antics rather than his skill. When Barcelona visits London to play Chelsea in the Champions League semifinals on Wednesday, it will not surprise anyone if Busquets pulls out some of his usual tricks. He is a recidivist diver, an alleged racist, an all-around loathsome pariah to some. An easy pantomime villain. Ask anyone who doesn’t like Barcelona why and somewhere in the first 10 words is the name “Busquets.” In one of last year’s seemingly endless stream of Clásicos, Busquets was accused of calling Real Madrid left back Marcelo a monkey. In the second leg of the Champions League quarterfinals against AC Milan it was Busquets who tumbled in a heap in the box to win a penalty for the go-ahead goal that sent Barcelona into the semifinals.

But if Busquets is a cheater — and he most certainly is — then he is a very lovable cheater. Because buried beneath his lengthy rap sheet of offenses against the purity of the game is a player who is arguably the best holding midfielder in the world. He doesn’t fly into tackles or spray the ball around the field 30 yards at a time. There is nothing Hollywood about his game (except his playacting).

What Busquets does as good as anyone else is read the game well, break up the opposing team’s moves, and pass the ball on quickly to one of the more creative players in the side. Tackle, win the ball, pass. Repeat. He is the platform on which Barcelona’s team of maestros stands. This season, Guardiola has played Xavi in a more advanced role in part due to David Villa’s season-ending injury in December. With Busquets playing both as a defensive shield and the team’s initial creative hub, Xavi has scored a career-best 14 goals in all club competitions.

Busquets is quietly changing the way we view holding midfielders. He is not a destroyer the way Claude Makelele (often thought of as the father of modern holding midfield play) was at Real Madrid and Chelsea. And while Makelele rarely left the center of the field, Busquets pops up all over the place. When necessary he drops deep to collect the ball, and at other times, like in last year’s Champions League final, he is on the edge of the opposing team’s box, providing the assist for a goal. The idea of the “box-to-box midfielder” has always been someone who is tireless, running nonstop from the first whistle to the last, but Busquets seems to cover the whole field without running much. The ball does the work for him.

Tactically, Busquets is the key to Barca switching from 4-3-3 in defense or 3-4-3 in attack. In Saturday’s 2-1 win against Levante, Busquets lined up in the center of the defense, but by the fifth minute he was playing in a more advanced role, helping start Barcelona’s attacks in Levante’s half of the field.

His versatility has helped Barcelona paper over some considerable cracks in their foundation this season. In August, in a match against Villarreal, Busquets played at center back and allowed Guardiola to rest the two injured defenders Carles Puyol and Gerard Pique. Barcelona won, 5-0.

Despite his value to the club, with every face-clutching dive, Busquets obscures his own talent and gives ammunition to those who believe Barcelona are successful only because they are accomplished cheaters.

When Barcelona defeated Chelsea in the Champions League semifinals in 2009, they did so with the aid of some generous refereeing decisions, so generous that referee Tom Henning Ovrebo reportedly still receives death threats three years later. Depending on whom you ask, Chelsea was denied somewhere between one and 50 clear penalty decisions. The lasting images from the match were Michael Ballack and Didier Drogba (in flip-flops) accosting Ovrebo during and after the match. If Barcelona are to remove some of the stain from that night, they not only have to win but they have to do so in style and without Busquets resorting to his usual tomfoolery.