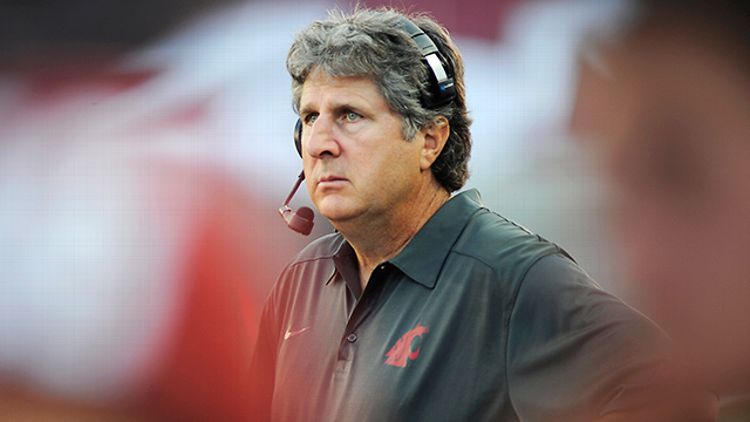 The Washington State Cougars followed up Mike Leach’s 3-9 inaugural campaign with a season-opening loss to Auburn, only to turn around the next week and upset then–no. 25 USC in the Coliseum. After a walkover victory against Southern Utah and a sloppy but significant rivalry win against Idaho, Wazzu will play no. 5 Stanford this Saturday night in Seattle.

Below, excerpts from a recent evening in Washington State’s war room, where Leach’s staff is preparing for the Cardinal.

As somebody who’s familiar with having your own words used against you, what do you make of Bo Pelini’s situation?

That’s unbelievable. Whoever did it’s gonna have a pretty tough time getting another job, you’d think.

There needs to be a sanctity of the office, and the locker room, so that stuff doesn’t leak out. Anytime you’re trying to set a course, there’s gonna be decisions made, and you have to weigh all options, and then in the end you come up with the best course. But that isn’t open record to anybody.

Click here for all of our interviews with fascinating people from the worlds of sports and pop culture.
There’s a very public quality to coaching. [Cussing] exists in boardrooms and companies and factories — butchers, bakers, candlestick makers, everybody. Really, it’s part of every profession, whether it’s good or it’s bad. People aren’t perfect, so it exists. I mean, you can walk down the hall, go to the mall, anywhere, and hear the same thing, basically. It’s just an element that exists in America to begin with.

One similarity is, in both cases, they liked it when they came here. A lot of cases, they don’t have an initial vision of it. Even in Texas, there’s a lot of people who’ve never been to Lubbock. And then once they got there, they liked it. Same thing here. People have been to the Bay Area, they’ve been to Los Angeles, they’ve been to Seattle. There’s a lot of people that have never been here. But once you get ’em here, it sells really well, just the student life.

That, and it’s real scenic. Somewhat isolated, but it’s real pretty up here. Outdoor-wise, there’s quite a bit of stuff. Lakes and mountains and whatnot. You know, it’s very much a college town. It’s got a very specific identity. There’s a lot of places that talk about being college towns. This is a college town. You’re not saturated [with students] within a city. Here they all live in one spot. My fondest part of college was the interaction and everything I did with my fellow students. That’s what I remember today. There were great people in the community, but I don’t remember any of them.

What stands out to you just from this first viewing [of the Stanford–Arizona State game]?

They’re real athletic and strong. How they looked last year. You have to keep them off-balance. And part of it is recognizing what they’re doing, trying to accomplish, and what their base philosophy is, but you have to be fast, decisive, and don’t hesitate. Stanford’s a strong enough team — a big enough, strong enough team — that people try to make too much happen, because of their respect for Stanford, and then their technique will break down. You have to avoid that.

You guys and Stanford are pretty night-and-day when it comes to offensive philosophy, which actually puts them in a minority at the moment. Why do you think the faster pace of play is so popular in the Pac-12?

I think initially it was an overreaction to when they changed the clock. They changed the clock, so a lot of coaches and staffs panicked. “OK, we’ve gotta get the plays in fast, because we’re not gonna have time to huddle and call a play.” Well, then it turns out you do. And now I think it’s receded some. But there was a time when everybody was concerned about it. We were always fairly quick. We didn’t adjust to anything. I think some will keep it, but I think a lot [of teams] will drop it.

You think it’s a fad?

Yeah, I do. Well, I think it’ll exist. I think plenty are doing it as it is.

I think [defenses] kinda have caught up to the offenses, because [speed] is not a perfect answer. Because if you’re gonna do it constantly, you have to simplify things. And there’s nothing wrong with that. But you simplify things, and in other words, you’re saying, “All right, we’re only running a few plays, but we’re going to do them really fast, and we can execute them faster than you can, at a better rate. Because we get to do it every day and you only get to work against it sometimes.” Which is solid. I mean, that’s a pretty good idea.