Plagues, Poultry, and the London Nose: A Guided Tour of the Olympic Marathon Course 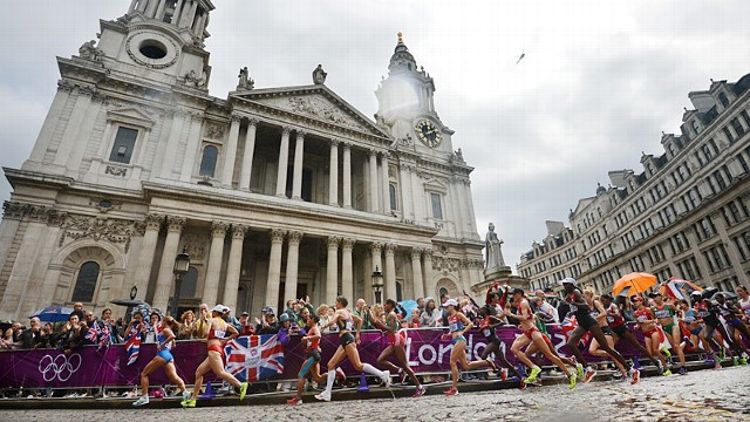 Marathons are always run on Sunday mornings. Race organizers will tell you that’s the most convenient time to close down the center of a major city, but last time I checked, the streets aren’t too crowded at 5 a.m. on a Thursday. Could it be that the real reason marathons take place on Sundays is so that ordinary, hung-over people sitting at home are guilt-tripped into buying pointless sporting equipment that will only be used once? Maybe it’s just me, but my attic looks like a gym’s locker room after the fire alarm has gone off. Only dustier.

So last Sunday, as I settled down with my bacon and Alka-Seltzer sandwich to watch the women’s marathon, I swore to myself: no more badminton racquets. And then, a brilliant idea hit me — why don’t I do the marathon? Or rather, the marathon course, for it’s only 10 miles long; the runners do three eight-mile laps, plus a two-mile loop around St. James’s Park. No need to run the whole thing. I’ll just do a lap, right? And I can write it up, as I hear that NBC’s commentators aren’t the best tour guides, and may struggle to accurately identify race landmarks such as Buckingham Palace and St Paul’s Cathedral. I can provide a guide to the course and get fit at the same time. Win-win, I think to myself, and plot the route of the course into a handy Google Map.

So, spin on to 11 a.m. Thursday morning. I’m at the start line, and I’ve forgotten to eat breakfast. Not the most promising start. As a firm believer in having achievable goals, I decide to downgrade my objectives, and set off at a brisk walking pace down the Mall toward the site of the first landmark on the course: the London Nose, found on Admiralty Arch. It is said to be a barbed tribute to the nasally endowed Napoleon, placed on the Arch so British cavalry could tweak it as they rode past. It’s a good story, albeit completely untrue. Admiralty Arch wasn’t built until 1912, some 90 years after Napoleon’s death, and the noses were installed in 1997 as a situationist prank.

Moving on, the course rounds Nelson’s Column (Nelson was some guy who did something with ships; I care as much about this as I do about Olympic Yngling races) before heading down to the river. At this point, the runners will turn right toward Westminster, then do a short loop up Birdcage Walk and back down the Mall before turning left onto the main course. They say there’s a lot of tactics in marathon running, so I decide to turn left immediately, thus shaving half an hour off my time and avoiding the eye-meltingly gaudy spectacle of Buckingham Palace. NBC’s announcers have (probably) got you covered there, and besides, the route goes through Horse Guards Parade, which is (a) hosting the dressage events, and so full of the sort of people who enjoy watching dressage, and (b) surrounded by soldiers who’ve recently returned from Afghanistan and have been press-ganged into duty around the venues. It’s weird enough seeing the army on the streets of London — as if I’ve stumbled onto the set of Call of Duty: The Movie — but half of them are wearing fluorescent-green high-visibility bibs over their desert camouflage, and it makes my eyes hurt. Left turn it is, then.

This takes us to the long, straight, boring part of the course, following the Embankment along the side of the Thames. The only point of interest here is Cleopatra’s Needle, which should have been a 1997 situationist prank symbolizing British girl group Cleopatra’s doomed attempt to dethrone the vastly inferior Spice Girls as Britain’s premier female pop export, but is instead something to do with Egypt. And at this stage, I’d like to apologize on behalf of Great Britain for the very existence of the Spice Girls and their inexplicable presence at Sunday’s Closing Ceremony. There is no excuse for this. We’re very, very sorry.

After Cleopatra’s Needle, there’s nothing but river and embassies for a couple of miles, and by the end of this stretch I’ve been walking for half an hour. I fear that my goals will have to be downgraded again unless I eat something, so I decide to enter a pub and invest some time in a nutritionally balanced breakfast: a mixed grill and a pint of Guinness. Suitably refreshed, I emerge at midday into blazing sunshine and a temperature of 88 degrees (which is enough to break most British thermometers), and prepare myself to tackle the uphill section of the course. The ascent into the financial district is short and steep, yet at the top you may see a sudden burst of speed from the marathon runners on Sunday, because the course immediately goes past the shiny new headquarters of the Church of Scientology. I certainly quickened my pace as I passed; as I understand it, Scientologists don’t acquire the ability to run marathons at world-record pace until they reach OT7 level, and I only had £15 in my pocket. Moving swiftly on, then, toward the banking district.

I have a bone to pick with the course designers here. This area of London is famous for three things: very old buildings, larcenous financial institutions, and silly street names. I feel the course neglects the last part. We could have had a race that went through Cock Lane, Bleeding Heart Yard, and Knightrider Street, before heading off down Poultry toward Seething Lane; instead the route focuses on tedious landmarks such as St Paul’s Cathedral, the Guildhall, Leadenhall Market, and the Bank of England. You’ll see plenty of that stuff on the NBC coverage, I’m sure, but what they won’t tell you is that the area is built upon a huge number of mass graves, filled with the bubo-riddled corpses of 450-year-old plague victims. Most tourist guides will also neglect to mention this, or the fact that London’s underground system cuts directly through the middle of several plague pits in this area, which should give you something to consider if you’re ever standing on the platform at St. Paul’s underground station.

Speaking of underground stations, it was at roughly this point of my journey that I remembered why my attic is full of sporting equipment. I’m pleased to say that I persevered as far as the Tower of London, which marks the easternmost part of the course; it’s at this point that the marathon runners double back on themselves and run all the way back down to Westminster, and then do the loop twice more. It’s also at this point that an overweight slob contemplates the damage caused by imminent heat stroke, takes note of nearby Tower Hill underground station, and heads for home. My Olympics are over, but I’ve learned some important lessons, not least the importance of breakfast and the differences between Guinness and isotonic sports drinks. But most important, I’ve learned why marathons are on Sundays: It’s to remind you that you’re not an athlete, and you should be glad of the fact. This Sunday, when the marathon’s on, sit back, enjoy the spectacle of other people’s efforts, and maybe buy yourself a set of badminton racquets.

Filed Under: Olympics, We Went there