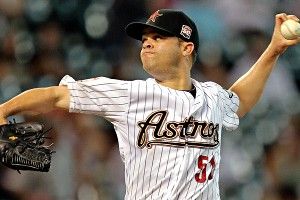 It’s not Cole Hamels or Zack Greinke or a good hitter. But the Pittsburgh Pirates traded prospects to land a quality veteran starting pitcher in late July. That, in itself, is a great sign.

The Bucs struck a deal with the Astros late Tuesday, sending outfield prospect Robbie Grossman and lefty pitching prospects Colton Cain and Rudy Owens to Houston for Wandy Rodriguez. The Astros also pick up $12 million of the remaining hefty commitment to Rodriguez, with the Pirates on the hook for just under $18 million — $1.7 million this year, $8.5 million in 2013, and $7.5 million in 2014 now that Rodriguez’s option has been activated with the trade.

In Rodriguez, the Pirates get a steady mid-rotation starter. Since 2008, he’s posted a strikeout-to-walk rate not far from 3-to-1. His strikeout rate’s fallen to a near-career-low 6.1 per 9 innings this year, so Rodriguez’s walks have also fallen, to a career-low 2.2 per 9 innings. He’s also become more of a ground ball pitcher this year, hoisting his GB rate to a career-high 50.7 percent. No worries about a divisional discount, either: Rodriguez gets to stay in the NL Central, rather than deal with the higher run environment that a trade to, say, an AL East would’ve wrought.

The trade also gives the Pirates that rarest of commodities: A surplus of starting pitching. As Jayson Stark noted in today’s Grantland Network podcast, the Pirates remain in hot pursuit of a bat. Dangling top prospect Starling Marte, along with one of their surplus starters (Jeff Karstens?) and perhaps another prospect could interest several teams with offense to sell.

For the Astros, Rodriguez was the last link to the 2005 team that stormed to the World Series (the oldest player on the roster now is 31-year-old catcher Chris Snyder). Houston’s been hard at work selling off all their veterans, from Carlos Lee to Brett Myers to their recent 10-player trade with the Jays.

Though the Astros understandably didn’t nab any of the Pirates’ premium prospects for Rodriguez, they did add to their growing depth, and got their best deadline trade package to date. Twenty-two-year-old outfield prospect Robbie Grossman posted a decent but unspectacular .266/.378/.406 line at Double-A Altoona before the trade. But he enjoyed a breakout year in 2011 while repeating High-A, and was ranked the sixth-best prospect in the Pirates’ system coming into this year by Baseball Prospectus’s Kevin Goldstein. Writing up Grossman, Goldstein’s perfect-world projection pegged him as an everyday corner outfielder in the majors with good on-base skills. Owens is a 24-year-old lefty who shaved nearly two runs off his ERA this year, walking fewer than 2 batters per 9 innings at Triple-A; he’s probably good enough to start for a lowly Astros team right now. Cain, 21, has struggled with back problems and mediocre strikeout rates, and owns a 4.85 FIP this year at high Single-A. But he got a $1 million signing bonus to forgo college for pro ball three years ago, and snared the no. 9 spot in BP’s Pirates prospect rankings last winter.

The Pirates are vying for their first playoff spot (and first winning season) in 20 years. The Astros are vying for the no. 1 overall pick in next summer’s amateur draft, and success three, four, five years down the road. Everybody wins.