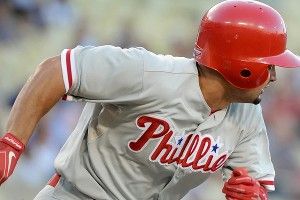 The Phillies’ trade of Shane Victorino to the Dodgers for Josh Lindblom and Ethan Martin helps the Dodgers in their quest to win the NL West, and carves out a bit of badly needed payroll flexibility for the tapped Phillies. In a broader sense, the trade can be summed up in two words: chain reaction.

It starts with Philly’s half decade of dominance. After 14 years in the wilderness, the 2007 Phillies finally won a division title, wresting the crown from the Mets, who’d finally toppled the dynastic Braves a year earlier. Five of the Phillies’ eight best regulars that year (Ryan Howard, 27; Chase Utley, 28; Jimmy Rollins, 28; Pat Burrell, 30; Carlos Ruiz, 28), as well as their best starting pitcher (a 23-year-old Cole Hamels) and closer (26-year-old Brett Myers), were homegrown. The team’s Opening Day payroll was $89.4 million, $6 million less than than the Phillies had carried two years earlier, and miles away from top-spending clubs like the Yankees. Several of the team’s top stars were signed to below-market contracts (including Utley at seven years, $85 million and Rollins five years, $40 million), portending good things as the team marched forward.

As the team’s success grew, so, too, did its payroll, and its ambitions. The ’08 Phillies repeated as NL East champs and won the World Series — their first in 28 years and just their second in franchise history. General Manager Pat Gillick opted to go out on top, handing the reins to Ruben Amaro Jr. right after being crowned world champs. Escalating numbers in existing contracts, along with Amaro’s aggressive new spending, combined to hike the team’s payroll by 15 percent in 2009, to $113 million. Howard signed a three-year, $54 million extension, buying out some gigantic would-be arbitration awards. Raul Ibanez signed for three years, $30 million, taking Burrell’s spot in left field. And at the ’09 trade deadline, Amaro made his most aggressive move yet, trading four prospects to the Indians for Cliff Lee and Ben Francisco.

It escalated quickly from there. After the Phils lost in the ’09 World Series, Amaro started doubling down. There were smaller deals, like a three-year, $18 million pact with Placido Polanco to upgrade at third base. Then there were the mega-deals. First, Amaro flipped three more prospects to Toronto, landing arguably the best pitcher in the game in Roy Halladay. The Phillies then locked up Halladay in another below-market deal, getting a steal at three years, $60 million plus an option. The next contract sparked far more controversy, when Howard signed a five-year, $125 million extension that didn’t kick in until Opening Day 2012, nearly two years after pen hit paper. Whether the Phillies were opening the vault because they overvalued home runs and RBIs and overlooked Howard’s shortcomings (his struggles versus lefties; lack of defensive value; the fact that he’d already peaked three years earlier) or because they wanted to retain the de facto face of the franchise, it was an overpay. Lee returned to Philly in 2011 after a year away at five years, $120 million; Rollins re-upped for three years, $33 million the next season; and Jonathan Papelbon also joined the next season at four years, $50 million.

When the Phillies took the field to start the 2012 season, they were shooting for their sixth straight division title. Except Howard, Utley, and Rollins were all well past their prime with Howard and Utley on the DL, and the rest of the roster looked thin behind Halladay, Lee, Hamels, Papelbon, and a couple of key position players. All told, the Phillies’ payroll had nearly doubled in five years, to $172 million. They’d finally moved into the Yankees’ neighborhood.

It’s easy to criticize Amaro for the flawed, hugely expensive roster he now has: If you want to know why Philly owes about $115 million to six players next year and craves payroll flexibility now, look no further than the deals they handed out over the past few years. But really, that’s the nature of success. More often than not, winning leads to more spending, and not necessarily the other way around. Maybe the Howard deal shouldn’t have happened, and the team’s nucleus should have seen more turnover as everyone got older. But the Phillies’ revenue streams had exploded thanks to their five straight division titles and new stadium, and Amaro had a mandate to keep the good times rolling. We were going to reach this point sooner or later, even if Branch Rickey were in charge.

The Phillies even found some benefit to their big spending. With the payroll tapped, they couldn’t afford to buy high on Victorino after his career year in 2011. His performance dropped sharply this year (.261/.324/.401 after a .279/.355/.491 effort in 2011), but that had no financial bearing on the Phillies’ future; without a contract extension, Victorino was set to become a free agent at the end of this year.

What Victorino’s big fall-off did do was destroy his trade value. Which is how the Dodgers landed him at such a low price. Lindblom’s career 4.01 FIP and 4.19 xFIP belie his more attractive 2.91 ERA; he’s a fly ball pitcher going from one of the stingiest home-run parks in the majors to one of the most generous, and he’s limited as a reliever, unless the Phillies opt to have him start again for the first time in two years. Acknowledging the small-sample-size caveats, dig this: Lindblom has a 3.74 FIP and 3.77 xFIP at home this year. On the road: 6.58 FIP, 4.98 xFIP. Martin offers more upside. He’s struggled terribly to find the strike zone throughout his minor league career, his 4.65 BB/9 IP marking the best walk rate of his career. But he’s also fanned more than a batter an inning in his three-and-a-half minor league seasons, and has plenty of pedigree as a first-round pick by the Dodgers four years ago. Even if neither pitcher works out, this move trims more than $3 million from Philly’s payroll, giving them a little more wiggle room this offseason when they try to patch their multiple lineup holes. If one or more players like Hunter Pence, Joe Blanton, Juan Pierre, or Ty Wigginton go by day’s end, it’ll be for similar reasons, with the added hope that Amaro can rebuild the farm system a bit in the process.

As for the Flyin’ Hawaiian himself, he should help the Dodgers, even if he’s now a true-talent .325 wOBA guy who won’t even give them the full benefit of his defense with Matt Kemp entrenched in center field. L.A. was going with Juan Rivera in left, with dashes of Bobby Abreu and Tony Gwynn Jr. None of those players offer the same blend of speed, defense, and at least serviceable offense that Victorino does. By acquiring Victorino, the Dodgers also fortify their bench, with all those part-time outfielders moving down a notch. Victorino coming aboard also means the Dodgers don’t have to consider swallowing Alfonso Soriano’s huge contract in a potential Ryan Dempster deal later today.

Neither Victorino nor Brandon League (the 29-year-old, command-challenged reliever acquired last night from Seattle) figure to improve the club as much as Hanley Ramirez will. But the Dodgers came into this season with the kind of stars-and-scrubs roster that resembled what the Phillies had. They’re now working to address those holes, while the Phillies are looking ahead to next year. If the Dodgers can find someone to replace James Loney by 4 p.m. ET, then they’ll really have something.