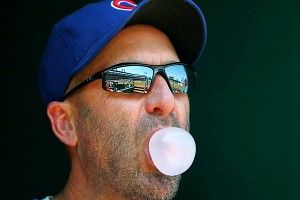 You can write what you want about Chicago Cubs manager Dale Sveum. He is probably not going to read it. He told Patrick Mooney of CSNChicago.com the following: “I don’t read the papers. I’m not a guy that tweets, or whatever you call that thing. I’m not a big computer guy. I don’t read the news. [During] my free time, I watch the NFL channel as much as I can … to keep up on [things] for fantasy reasons.”

That’s probably a really good idea. I try to watch as much NFL channel as I can too, to keep up on things, for environmental policy reasons. I wonder what else Dale Sveum is not into. What other wonders of the modern world is he not a big guy about?

Combustion? Any food not made in a Dutch oven? Refrigeration? Any illumination not coming from fire? Scenting his skin with anything other than authentic, 19th-century Florida water cologne? Reading any American literature after James Fenimore Cooper? Listening to anything recorded after Scott Joplin’s “The Entertainer”? Reading anything else but the works of Frank Herbert “for fantasy reasons”? Double-switching? Giving guys a day off if they blow out their Achilles tendon? Let us know if you have any ideas, in the comments.