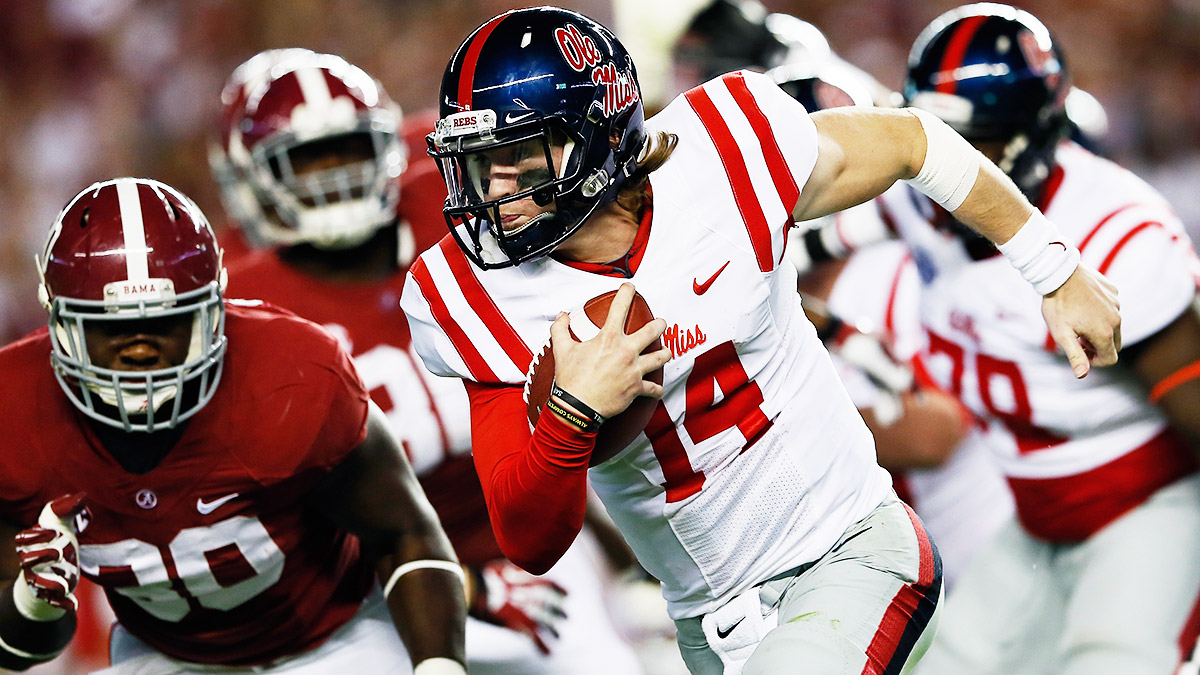 On Saturday, the two most anticipated, high-profile games of the college football weekend will kick off around 100 miles apart, in Oxford and Starkville, Mississippi, and the locals are more than a little enthusiastic. They’re freaking out. College GameDay, the roving center of gravity in the sport, will make its first trip to Oxford, broadcasting live from Ole Miss’s campus and casting a rare national spotlight on the state. The GameDay set will go up in the middle of “the Grove,” the 10-acre tent city that relishes its reputation as the most ostentatious tailgating scene in the nation,1 ensuring maximum optics from the sundress/seersucker set. Speculation is mounting over which local luminary will join the show as the “guest picker” before the game. Ticket prices are soaring.

“Oxford’s a pretty small town,” said Hugh Kellenberger, who covers Ole Miss sports for the state’s largest newspaper, the Jackson Clarion-Ledger, “and it’s beginning to burst at the seams.”

Within the borders of this football-mad state that rarely gets much attention,2 nothing is bigger than Ole Miss and Mississippi State — deer season, maybe — and for the first time in a very, very long time, both programs look worthy of the national stage. The Rebels are ranked 11th in the latest AP poll, their best post-September ranking since 1970, Archie Manning’s final year.3 The Bulldogs, fresh off a watershed victory at LSU, are ranked 12th. The last time both schools played as ranked teams on the same day was November 25, 1999, when they faced off against each other; the last time they ranked among the top 15 in the same season was 1958. Now they have an opportunity to not only unseat a pair of established, top-10 front-runners — no. 3 Alabama (at Ole Miss) and no. 6 Texas A&M (at MSU) — with significantly deeper pockets, but also to replace them in the SEC West pecking order.

Collisions of this magnitude unfold in college football on a near-weekly basis, but rarely more than once in the same state, and never in this state, which has labored under an inferiority complex relative to the rest of the conference — and to the rest of the West Division, especially — for as long as anyone who pledges allegiance to either school can remember. Ole Miss and Mississippi State fans are bitter rivals accustomed to glowering at one another from across a self-styled cultural divide, but they all understand this: When a national audience tunes in to ESPN (at noon ET) and CBS (at 3:30 p.m.) on Saturday, the most compelling narrative on offer will be Mississippi football on the brink of a breakthrough, and that is a breakthrough in and of itself. For one weekend, at least, the rest of America will be told a story about Mississippi at its best. 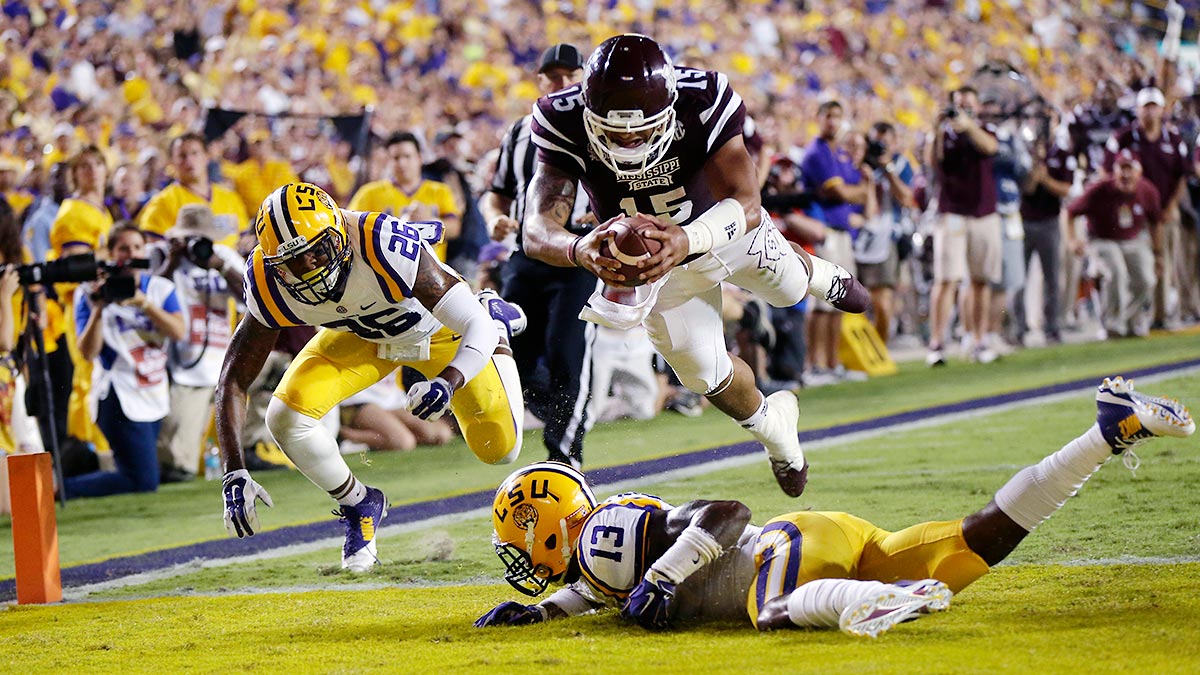 Which is not to say that the football couldn’t be better. For years, Mississippians have lamented that a state with a population of fewer than 3 million people (fewer than 20 percent of whom have earned a college degree) continues to bear the burden of supporting eight public universities, five of which are located within a 150-mile radius. In part, that’s because they view the redundancy as a waste of scarce resources, and as a reinforcement of racial divisions.4 Mainly, though, they resent the implications for football. Neighbors Louisiana, Arkansas, and Tennessee all have one above-the-fold program that sucks up the air in those states, along with the vast majority of the resources and the top talent. The same is true for Missouri, and to a lesser extent for Georgia, where the Bulldogs have always pulled in more revenue and better players than their in-state rival, Georgia Tech.

And if there’s one ingredient Mississippi has, it’s talent: Per capita, it produces FBS talent at a slightly better rate than Texas, arguably the most heavily scouted and recruited state in the nation, and also at a significantly greater rate than any non-Southern state except Hawaii. Based on 2014 pro rosters, Mississippi high schools have produced more current NFL players per capita than any state other than Louisiana or South Carolina, or than Washington, D.C.

For the most sparsely populated, slowest-growing state in the region, though, the limits of per-capita success are obvious, and are only exacerbated by the pull of having two equally powerful poles within easy driving distance of one another. Ole Miss, a perennial SEC power in the middle of the century, hasn’t won a conference championship since 1963. Mississippi State’s only SEC title came in 1941, which was also the last time the Bulldogs and Rebels met in the annual Egg Bowl with a championship at stake for both sides. (Eight days later, Japan bombed Pearl Harbor.) Since the conference split into two divisions, in 1992, Mississippi State has represented the West Division in the SEC championship game only once (in 1998), and Ole Miss has yet to even the score.5

If that drought ends this year or next, though, it will be largely due to an influx of outside talent. The foundation for Ole Miss’s current team6 was laid by the first full recruiting class under coach Hugh Freeze, a massively hyped group in 2013 that included the nation’s top-ranked wide receiver (Laquon Treadwell, from Illinois), top-ranked offensive lineman (Laremy Tunsil, from Florida), and top-ranked overall player (defensive lineman Robert Nkemdiche, from Georgia).7 The Rebels’ starting quarterback, Bo Wallace, is a Tennessee native who spent his freshman season at Arkansas State when Freeze coached the Red Wolves. Ole Miss’s top four tailbacks also hail from Tennessee. Four of the top five receivers are from out of state, including Treadwell. Defensively, four of the top five tacklers are imports. 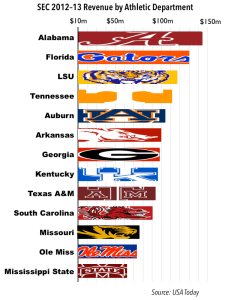 But it was the 2013 class, especially, that signaled a sea change in the Rebels’ potential to compete with the likes of Alabama, Auburn, and LSU for elite talent, paying immediate dividends: The five-star freshmen saw meaningful time from day one, and the Rebels scored wins over blue-chip outfits from Texas and LSU. They also played Auburn within a possession and took Texas A&M to the final snap. This year, they pass the proverbial eye test athletically, as Nick Saban is willing to attest. Still, is it too soon to expect that potential to produce results at the expense of a proven, full-fledged heavyweight like the Crimson Tide?

“Those kids, Laremy Tunsil, Laquon Treadwell, Robert Nkemdiche, those are the leaders on this team that people follow the example of,” Kellenberger said. “It’s kind of a catch-22, because you want to say ‘those guys are only sophomores.’ But I don’t think there’s anybody who believes those kids are going to see their senior season at Ole Miss [in 2016].

“So you point to 2015, and that will certainly be the better year, but they’re going to lose Cody Prewitt, an All-American safety, and they’re going to lose their quarterback,” Kellenberger continued. “I don’t know if there’s ever going to be a year where everything is going to line up perfectly and Ole Miss can say, ‘This is the year that we’re going to be favored to win the SEC West.’ But you can look at what they’ve done so far with this defense, and the fact that they have a senior quarterback, and you wonder, maybe this [2014] is the year.”

Outsiders also headline Mississippi State, beginning at the top. The head coach, Dan Mullen, is a Pennsylvania native by way of Florida, but nevertheless gives the impression when things are going well that he could mount a strong campaign for governor. And by prevailing standards in Starkville, things have gone very well. Before Mullen’s arrival, in 2009, the Bulldogs had suffered through seven losing seasons in the previous eight years, racking up a conference record of 13-51 in that span. Under Mullen, they’ve played in four consecutive bowl games, were ranked in 23 consecutive AP polls, and doubled their SEC winning percentage relative to 2001-08, from .203 in those years to .415 during his tenure.

But Mullen is a known quantity, and speaking strictly in terms of wins and losses, that quantity has yet to make a dent in the SEC standings. What elevates the 2014 Bulldogs from their immediate predecessors — so far, anyway — is another indispensable transplant, Louisiana native Dak Prescott, who still has 1.5 years of eligibility remaining but could easily win a poll today as the best quarterback in Mississippi State history. Over the summer, a small handful of people floated Prescott as a long-shot Heisman contender based on just seven starting assignments in 2013, resulting in a kind of fun-house mirror effect that reflected, refracted, and distorted those small kernels of hype into a straight-up bandwagon by opening day. After his bravura 373-yard, three-touchdown performance at LSU, however, even the skeptics (read: yours truly) have hitched a ride. The upset in Baton Rouge snapped a 14-year losing streak in the series and opened eyes across the conference to Mississippi State’s capacity to throw the status quo into chaos.

Prescott is the ideal point man for MSU’s offense, a near–carbon copy of another Mullen protégé, Tim Tebow, in terms of size, style, and substance. In at least one respect, Prescott is actually an upgrade over Tebow, because he possesses home run potential as a runner that Tebow never did, without sacrificing much in the way of short-yardage muscle. As long as Mullen’s quarterback remains a viable threat on the ground, the coach knows how to compensate for less-than-ideal accuracy in the passing game. If Prescott manages to sustain his current efficiency rating, the Bulldogs will contend in every game. 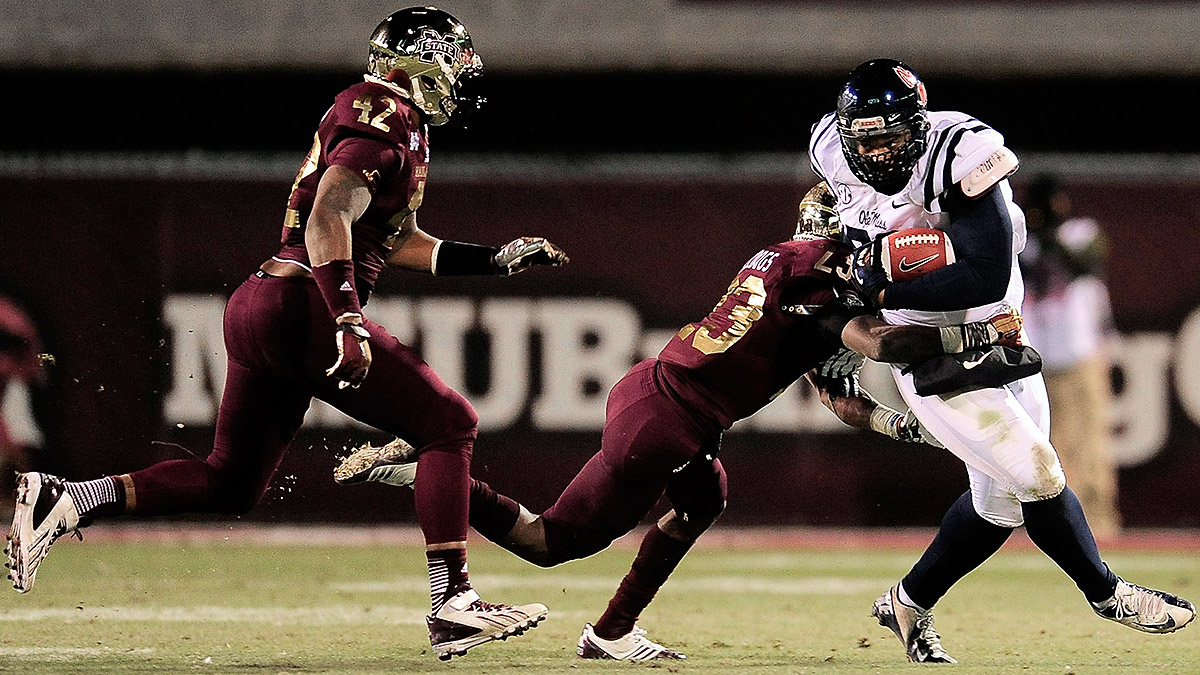 Of course, at this stage of the season, every team in the SEC West is a contender in every game: Six of the division’s seven teams are ranked in the top 15, and the one that isn’t, Arkansas, earned votes this week after letting a major upset slip through its fingers against Texas A&M. After Saturday, the round-robin continues October 11 with Ole Miss at Texas A&M, Auburn at Mississippi State, and Alabama at Arkansas. The following week, Texas A&M goes to Alabama; the week after that, Ole Miss visits LSU. Then comes November, when things get really crazy.

Still, there’s something to be said for standing at the precipice. The last time Mississippi State found itself in a similarly optimistic position, on the strength of a 7-0 start against a much cushier schedule in 2012, it went on to lose three straight to Alabama, Texas A&M, and LSU by an average margin of 25 points. Before the win at LSU two weeks ago, the Bulldogs hadn’t beaten a ranked opponent in their last 15 tries, dating back to 2010. And it’s still hard to know how much to read into that win in Baton Rouge: The Tigers are having quarterback issues; it’s entirely possible the new starter, true freshman Brandon Harris,8 will provide the spark that sophomore Anthony Jennings could not against MSU, or that LSU is a mediocre team all the way around. Any assumptions about Mississippi State remain wide open to interpretation and, if necessary, revision.

The same goes for Ole Miss, a talented team attempting to leap ahead several places on the learning curve in a single bound. At this time nearly two years ago, the Rebels were a hapless outfit under a first-year coach striving for a single SEC win amid a 16-game conference losing streak. They’ve lost 10 in a row to Alabama, including last year’s 25-0 flop in Tuscaloosa. Anyone currently buying this team as a serious contender in the most cutthroat division in the nation is doing so strictly on spec.

But Freeze and Mullen have been aiming their programs for this moment, on this stage, since they stepped onto their respective campuses. The window is narrow, the margin for error almost nonexistent. If Saturday is only a fleeting chance at relevance, though, at least it is a chance, one that has rarely come for these two programs and may not come again for some time. Every success story has to start somewhere. For Ole Miss and Mississippi State, there’s never been a better time than now.