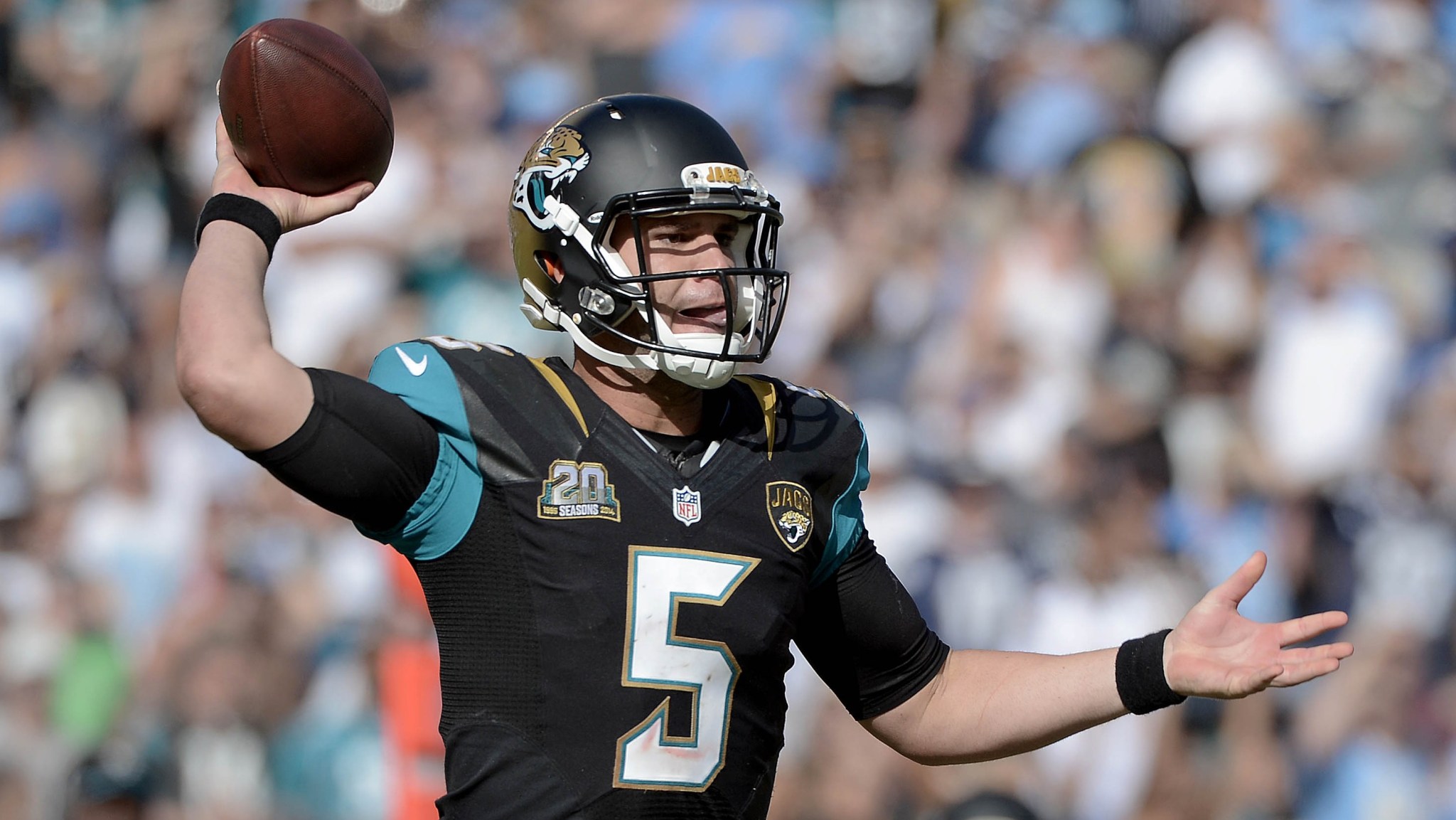 Hello, degenerate gamblers, and thank you, Blake Bortles! I just knew you had 0.5 INTs in you last week. In fact you shattered that over/under by throwing two picks in San Diego. I don’t have to remind him. He probably knows all of this.

Anyway, I’m back on track. My jermajesty deficit barely sits in the five-figure zone and I’m looking to improve with some stellar Thursday plays in a classic black-and-blue division rivalry game.

Aaron Rodgers has spent 70 percent of the Packers’ offensive plays lined up in shotgun (up from 60 percent last year). This is a big reason why Lacy is struggling. Another big reason is that Lacy is averaging less than 2.5 yards per carry on plays run under center. And yet another big reason is that he spent this offseason training at various Arby’s franchises with Rob Kardashian. It all adds up to bad news for the former Alabama star and those who paid a heavy price for him in their fantasy drafts. Through four games, the Vikings have only allowed one running back (Stevan Ridley) to go over 70 yards on the ground. Most importantly, top Vikings tacklers Robert Blanton, Anthony Barr, and Captain Munnerlyn are among the best dread-yankers in the business. Take the under. 3,000 jermajesties

There’s no doubt Patterson is a phenomenal athlete who can score any time he touches the ball. But thus far he has not proven to be one of Teddy Bridgewater’s favorite targets. Jarius Wright (eight receptions, 132 yards last week) is that guy. Patterson caught only two balls last Sunday and Bridgewater not practicing much the last three days leads me to believe they will not be in sync against the Packers. I have even less faith in Christian Ponder if Bridgewater’s ankle keeps him out. Long punt returns, end arounds, and fumblerooskis are all potentially big Patterson plays. Just not the garden-variety reception. Not yet at least. 3,000 jermajesties

I realize this wager flies in the face of the two individual under plays I just made, but I’m nothing if not inconsistent. I’ll tell you what IS consistent … scoring in the Thursday night game. We’ve seen 129 points tallied over the last two Thursdays. So let me jinx that trend right now by playing the high-end ranges. Consider this a potentially lucrative hedge against my previous under plays. 1,000 jermajesties each

Jacksonville (-200) will win a game before Oakland

Those are some sharp guys over at bovada.com. They realize there’s a decent chance they can earn interest on this wager for the next seven or eight years. Seriously — if the Raiders don’t win at the Browns on October 26, they could be looking at a goose egg for 2014. Are you sure you want this job, Tony Sparano? I can get you some pretty steady pay as a maître d’ at your local Olive Garden. I predict the big W will come sooner for the Jags. Might I say as soon as this Sunday against the Steelers, mere hours after the Raiders returned from their royal whipping in London? I might. I just might. 5,000 jermajesties

Over/under 18,219.5 fans at Washington’s FedExField who will suffer from food poisoning after eating nachos served at Jimmy Carter’s inauguration

What’s worse than forcing your fans to watch you get blown out by 31 points in your own stadium? Selling them expired beer while they watched. Yes, this happened in Washington last Thursday night, with fans tweeting pictures of spoiled commemorative World Cup beer. On deck … Ben’s Chili Ebola. Sorry, I was told that bad pun would get a rise out of D.C. natives.

I hate to blame Tom Brady (it’s much easier to point the finger at the inadequate, Logan Mankins–less O-line) for the Patriots’ offensive woes, but it’s been a while since I’ve seen him make a good throw. That said, maybe Cloon Dog oughta wait until Sunday night to see how that “Belichick doesn’t lose two in a row” trend plays out before making any life-altering decisions.

Over/under 62.5 tears of joy shed by me when Sean Payton called for an ill-fated fake punt Sunday night versus my beloved/cursed Cowboys

Any long-suffering Cowboys fan would agree there’s a good chance the Saints win that game in overtime if they run a regular play there … or just punt the ball away. Thomas Morstead rolling right on fourth-and-long is about as threatening as Amanda Bynes waving a vodka-soaked churro in your face.

Here are a few that weren’t among the hundreds of tweets mentioning that thing I can’t talk about.

@TheCousinSal I missed your wrestling days. What was your signature and your finisher moves?

My signature move was the airplane spin. My finisher was waiting for Cousin Jimmy to distract my opponent, then rolling him up from behind for the pinfall. It was that formula that led me to an undefeated (1-0) career in pro wrestling. I’m all out of bubble gum. Check it out.

That is such a weird question. I never thought about it. Never had to … knock on wood.

Over/under 62,128.5 guesses the elderly woman in this recent Jimmy Kimmel Live bit would’ve had to have made before coming up with “Yasiel Puig” as the correct answer

You know … now that she mentions it, Puig DOES resemble Darryl White. Whoever the hell that is.

That’s that. Enjoy Week 5. Also, catch me on SportsCenter giving gambling advice (4-2 against the spread over the last two weeks) with Neil Everett tonight at 10 p.m. on the West Coast and tomorrow at 10 a.m. on the East Coast. Sorry, Middle Coast. You guys, unfortunately, have to miss out.

NLDS Preview: Breaking Down Giants vs. Nationals and Cardinals vs. Dodgers