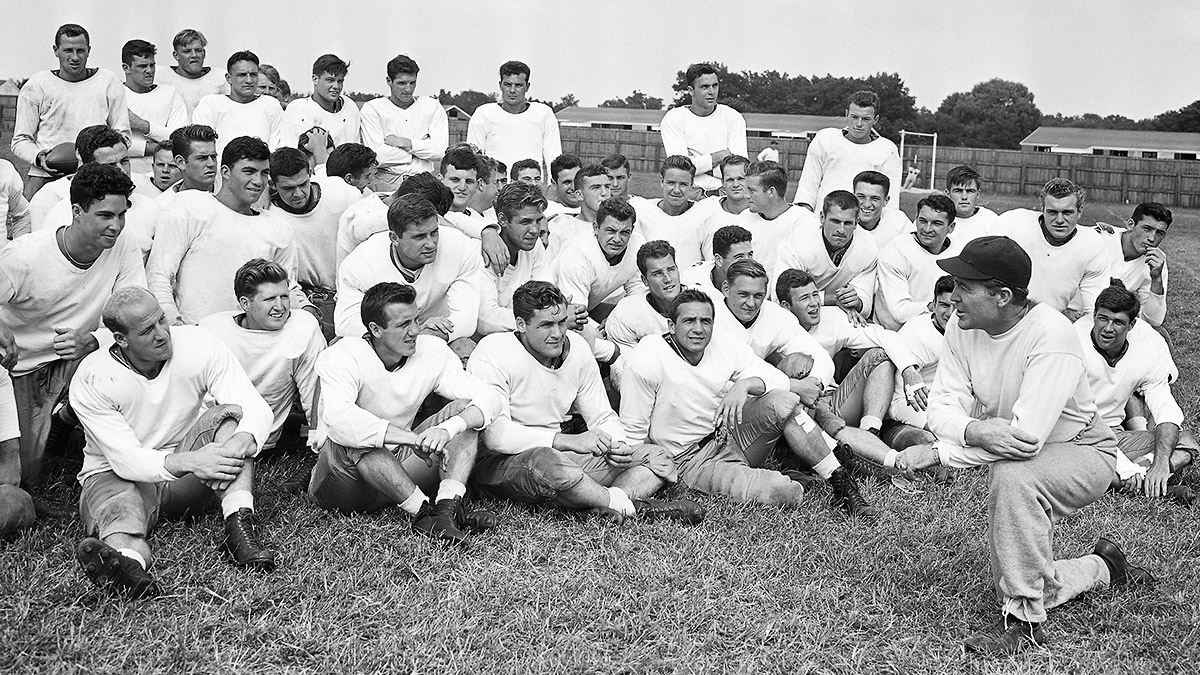 When Jim Martin enrolled as a freshman at Notre Dame, he was a 22-year-old, 204-pound end with 17-inch calves and a “Death Before Dishonor” tattoo on his arm. He’d won a Bronze Star as a Marine for a scouting mission that involved swimming through a maze of sea mines; the legend goes that when he’d show up at American Legion dances with his teammates, most everyone would be dancing with the daughters, but Martin would take up with the mothers.

He arrived in South Bend in the summer of 1946, after the war had ended and the troops had come home, at a moment when it became acceptable to once again focus on the frivolity of sport. This was the year a Notre Dame coach named Frank Leahy celebrated his own two-year stint in the Navy by rounding up a class of returning veterans that comprised the greatest recruiting haul of all time. Leahy reportedly first recruited Martin (nicknamed “Jungle Jim”) in the woods of Iwo Jima and pitched Notre Dame to offensive tackle George Connor (who had played at Holy Cross before the war) at Pearl Harbor. As a first lieutenant in the Navy, Leahy organized recreational activities for submarine crews in the Pacific, which meant he spent much of the war scouting talent. And that’s how he wound up bringing in a class that went 36-0-2 over the course of four seasons, won three national championships, and produced 42 NFL players.1

Some seven decades later, as yet another national signing day arrives, there’s a reason beyond the sheer weight of its talent that Leahy’s class still matters. That class coincided with a historical nexus, one of those watershed eras, similar to the present moment, in which college football came face to face with its own scarred soul: Those Notre Dame recruits went through school amid an essential tug-of-war between amateurism and the free market. And without that postwar debate, without the hand-wringing of the purported reformers and the defiance of the SEC, none of what we know as “modern recruiting” — the overzealous message-board posters, the ESPNU hat dances, the relentless sales pitches of middle-aged men to teenage prospects — might exist in its present form. But after it was over, there was no turning back. 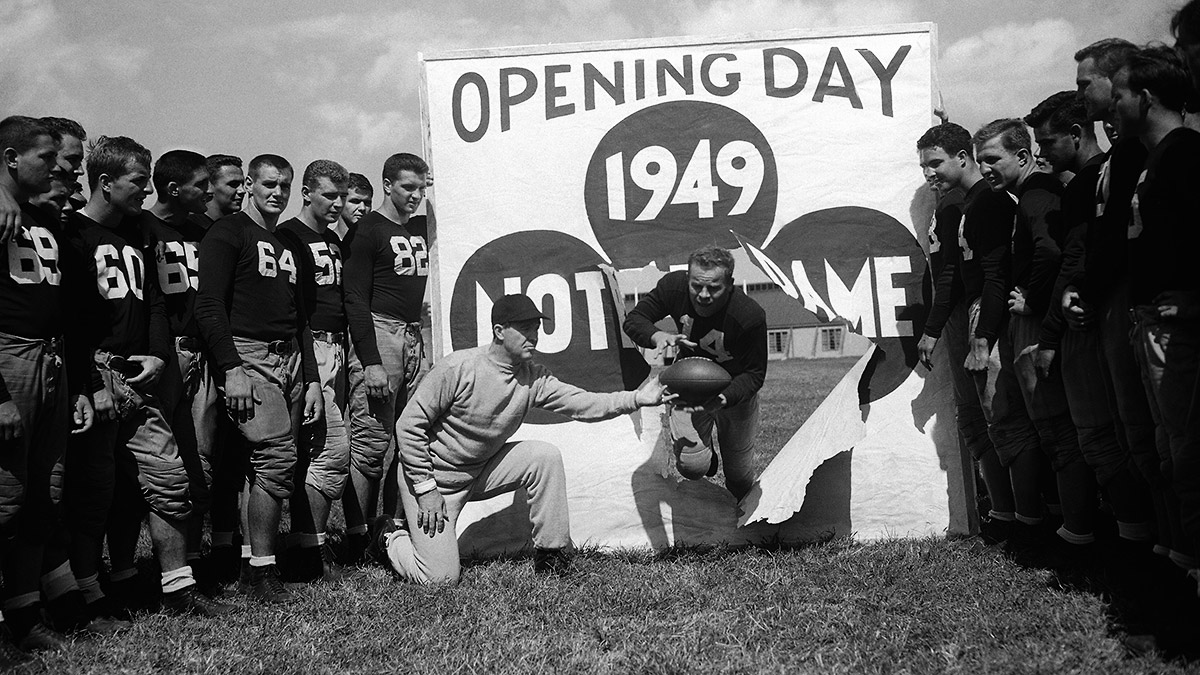 Notre Dame hired Leahy in 1941 to be the spiritual heir to the legacy of Knute Rockne, who had died in a plane crash a decade earlier. Leahy had played for Rockne in the late 1920s, and then gone on to become the line coach at Fordham, which produced the famed Seven Blocks of Granite (among them Vince Lombardi). In 1939, he became the coach at Boston College, and after winning 20 of his 22 games in two seasons and going undefeated in 1940, he begged out of his contract and left for his alma mater, where he went 8-0-1 in his first year with the Irish.

Leahy didn’t possess Rockne’s overarching charisma and magnetism, but he was regarded by his peers as something of a football savant, a sort of Urban Meyer–esque control freak who was in his early thirties when he took the Notre Dame job. Post-Rockne, the Irish were still media darlings, revered among Catholic prep school talent and the New York sportswriting intelligentsia, with their stars regularly the subjects of gauzy profiles in glossy magazines. In 1942, Leahy decided to scrap Rockne’s box formation on offense and embrace the T-formation, which he saw as the future of football; this was such a source of concern that Leahy reportedly went to the president of the university and requested permission. He went 7-2-2 that season, and then in 1943 won nine games and a national championship, Notre Dame’s first since Rockne’s death.

Even the Irish’s lone loss that season proved to be a productive recruiting opportunity: When Notre Dame dropped a game in the final minute to a team fielded by the Great Lakes Naval Training Station, Leahy was greeted by a Great Lakes running back named Emil Sitko, who’d grown up in Fort Wayne idolizing the Irish, and had enrolled briefly as a freshman at Notre Dame in 1942 before joining the war effort. Sitko asked Leahy how he was doing. Leahy said he’d been better.

“So did mine, Coach,” Sitko replied. 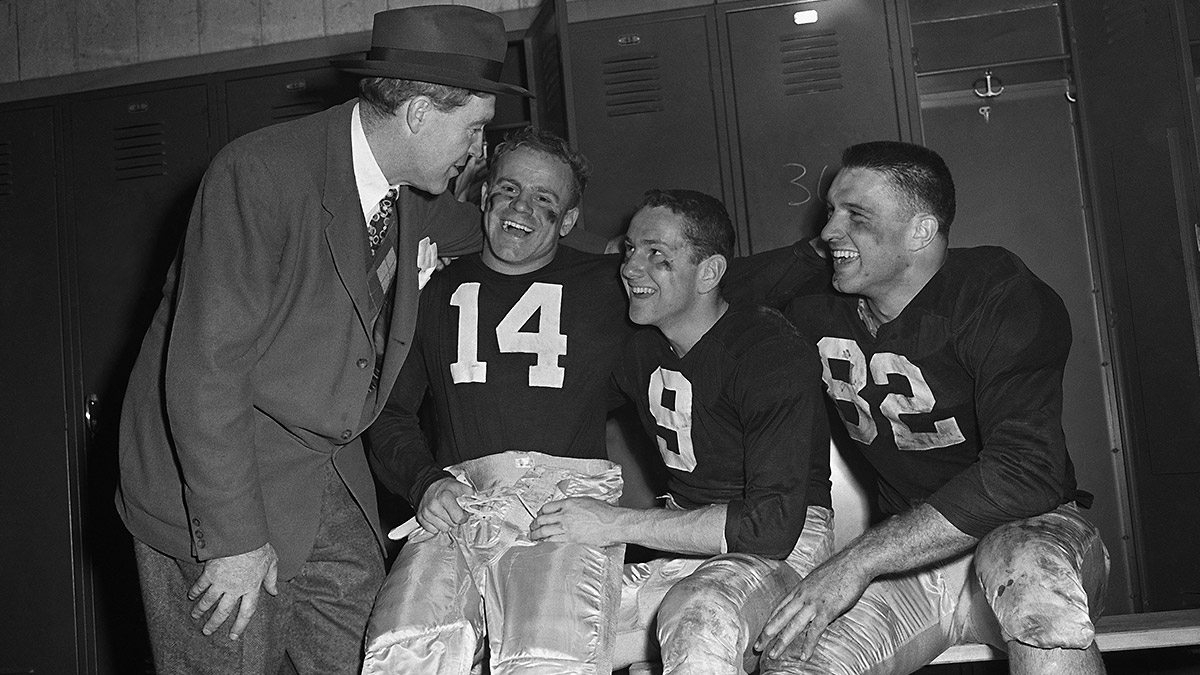 Leahy was convinced by his own assistant coach, Ed “Moose” Krause, to join the Navy. Everything would be different after the war, Krause told him; the dynamic between coach and player would be forever altered, and the only way to maintain an air of authority would be for the coaches to enlist, too. This is what Leahy did, and it turned out to be a brilliant decision: Between his own wartime recruiting efforts and Notre Dame’s overarching reputation, some 200 men signed up for tryouts that summer of 1946, according to a Notre Dame Magazine article written by Michael Rodio and Andy Panelli. Because platoon football was not yet an accepted element of the sport, Leahy had to narrow down his starters to 11.

In all, about 70 players were on the Notre Dame roster that season: roughly 50 returning veterans — including Martin and Connor and Sitko, who rejoined the Irish and became the only back to lead Notre Dame in rushing for four straight seasons — plus another 20 or so who weren’t called for service, ranging in age from 172 to 26. The Irish’s depth was so obscene that Leahy counseled at least one player to go to the NFL because he’d have a better chance of playing there than at Notre Dame. Practices became legendarily brutal: The Irish would go full contact on Thursdays and Fridays to see who made the traveling team, and those who stood out and remained uninjured would make the trip; fullback John Panelli broke his nose so many times that he learned how to reset it himself while still on the field.

“They always said their toughest games were during the week,” says Notre Dame historian Lou Somogyi, a senior editor at Blue & Gold Illustrated. “Saturday was like a break time for them.”

In 1946, the Irish pounded every team they played, outscoring opponents 271-24 and winning every game except the contest against Army (which they played to a 0-0 tie in Yankee Stadium in one of the sport’s most lackluster incarnations of a Game of the Century). The Irish went 9-0 in 1947 to win a second consecutive Associated Press national championship, then 9-0-1 in 1948 and 10-0 (for a third title) in 1949.

These were strange and heady times for college football. Buoyed by the GI Bill, colleges began sweetening their incentive packages to returning veterans by promising them lucrative jobs and extra scholarship money. Certain schools began permitting “athletic scholarships,” transfer rules were loose and free, and the NCAA’s only role was an advisory one. At some places, the payroll for athletes was upward of $100,000; an All-American halfback named Shorty McWilliams transferred from West Point after the 1945 season because Mississippi State boosters reportedly offered him $15,000 in cash, a $300-a-month job, use of a car, and a job after graduation. At Maryland, a young coach fresh out of the service named Paul “Bear” Bryant loaded a group from his Navy pre-flight squad onto a bus, enrolled them with a “double scholarship” from the GI Bill and athletic grants, and won his first game a week later by a score of 60-6.

The war made it impossible to determine what was legal and what wasn’t. The ideal of amateurism had become essentially undefinable; the SEC had already begun offering outright athletic scholarships in 1935, while conferences like the Big Ten — whose jealousy of Notre Dame’s success motivated often spurious accusations of cheating and increased reluctance to schedule the Irish — refused to do so. Recruiting had become a nuisance, to the point that “the most sought-after players received visits from as many as seventy-five colleges,” wrote author John Sayle Watterson in his book-length history of college football. “Occasionally the college recruiter persuaded the athlete to quit high school so that he could work out with the college team in spring practice.”

So in 1948, in an effort spearheaded by the Big Ten, new bylaws were adopted. Known first as the Purity Code, and then the Sanity Code, the rules were designed to limit subsidies to players and give the NCAA more power to expel schools that were not complying with the rules. The Southern schools immediately rebelled against these prohibitions, and a group of colleges became known as the Sinful Seven after openly refusing to adhere to the bylaws. And they were joined in their objections by the Fighting Irish.

Notre Dame president John J. Cavanaugh decried the code as hypocritical, in part due to the enmity between Notre Dame and the Big Ten. Cavanaugh felt that accusations of Notre Dame exhibiting a win-at-all-costs attitude (and violating the Purity Code) could just as easily be directed at the Big Ten: For example, the Irish’s opening opponent in 1946 was Illinois, which had reportedly outbid a number of other schools for the services of a running back named Buddy Young.

There is, according to author Murray Sperber, no real evidence of Notre Dame bending the rules during this time period. Because the Irish recruited so well through reputation alone, because they were so heavily scrutinized by the Big Ten, and because they adhered so heavily to what Sperber refers to as “classic ideals,” the idea of cheating “was out of the question for the men in the Golden Dome.” But the wider dynamic was shifting around the Irish: For the first time, the Sanity Code allowed schools to pay an athlete’s tuition, his incidental fees, and for a meal per day during the season. “For the first time,” Watterson wrote, “the NCAA treated athletes as a separate group, and, by so doing, it created the precedent for larger subsidies, eventually culminating in the ‘free ride.’ In short, the code was a critical step toward subsidized athletics.”

Eventually, the Sinful Seven managed to defeat the Sanity Code. The issue of athletic subsidies, Watterson writes, was returned to the individual schools and conferences, and most began sanctioning grants for athletes. Notre Dame, growing uneasy with its unprecedented success, enacted its own individual reform: In 1947, the Irish cut their scholarship numbers from 33 to 18. Once the Class of ’46 was gone, Leahy struggled to a 4-4-1 season, and after a 9-0-1 campaign in 1953, he resigned. For more than a decade, the Irish endured a period of “de-emphasis,” even as the sport grew all around them.

“They were getting maybe a little uncomfortable that they were always a football factory,” Somogyi says. But by then, it was too late. By then, in the wake of a harrowing war with zero-sum stakes, the idea of sanity in college sports had been rendered nothing more than an idle fantasy.