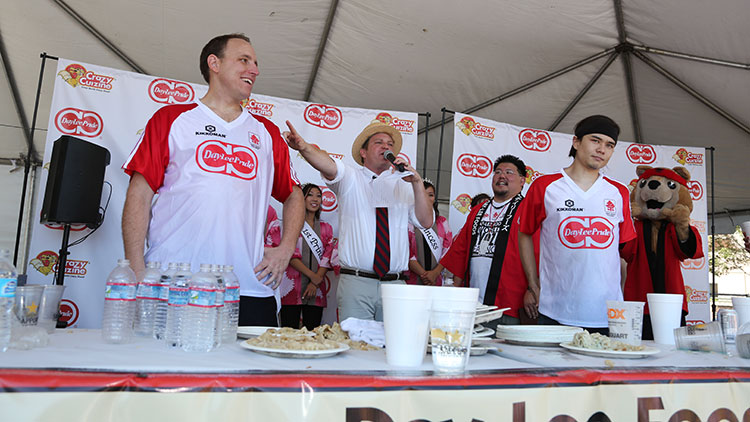 It’s a little past 11:30 a.m., three hours before the 2014 Day-Lee Foods World Gyoza Eating Championship is set to begin, and all the eaters are huddled in a small, private dining room serving as a makeshift conference room. Miki Sudo, the no. 4 eater in the world, eats a small order of gyoza (Japanese dumplings) before quickly moving on to a small plastic tray of chicken katsu. I hadn’t ingested anything all day, save for two bottles of water. Glancing over at her, I’m starting to reconsider my strategy. Her hair, fruit punch red, is making me crave a chicken sandwich. I settle for a plate of five gyoza, concluding that I need to acclimate myself to my environment, lest I want to be a goldfish dying of shock in a new fishbowl.

Joey Chestnut peeks his head through the door. He’s immediately greeted with a shrill “JOEY FUCKING CHESTNUT!” from Sudo. Chestnut, in most worlds, is not a man who most would consider the center of attention. Here, the sight of him alone has his longtime competitors replaying the opening arpeggio to “Baba O’Riley” (Chestnut’s entrance music) in their heads. He’s the gold standard, the greatest eater there has ever been. In the minutes before competition, Chestnut is cordial, all smiles, a jokester.1 Here, he’s mostly business.

After signing the waiver form — the main reason why we’re here — Chestnut makes a beeline to the other side of the room to Sam Barclay, the bombastic Major League Eating MC and official.

“Are they going to change how they make the gyoza?”

Last year, the gyoza were hard. This makes sense. The most popular preparation for the Japanese version of the dumpling is to pan fry them on one side, creating a hard crust, while the other side steams. Over time, the loss of heat makes the hardened portions tough. The crust creates an inconvenient chew. It’s an extra split-second to deal with. When you’re Chestnut, or 22-year-old boy wonder Matt Stonie, that split-second is the difference. It’s the difference between being the new world-record holder and facing the unsatisfying fate of being an extraordinary runner-up — the 2014 LeBron James of the gyoza game.

Like enlightenment, it’s something you have to train the body and mind to reach. It’s not something that happens overnight. Most humans are conditioned to masticate for an extended period of time to break down foods to a point where it is more or less certain that no choking will occur. Competitive eaters find ways to expedite the process — mashing multiple gyoza with their hands before taking enormous chomps before swallowing — or forgo the act of chewing altogether. They work out their jaw muscles and probably have a bite force more in line with a rabid dog than the average human. Their stomachs, according to one of the few scientific journal articles on competitive eating, are capable of becoming “a giant, flaccid sac occupying most of [the] upper abdomen … dilating to a degree that it could accept an almost unlimited volume of food.”

Eaters are congregated behind the contest stage. Eric “Badlands” Booker, the no. 22–ranked eater, walks up to the group with good news. He shows his right hand; within are two sample gyoza from the event workers. They’re an eerie, opaque color (like a beluga whale in sepia tone). They’re soft, pliant, and offer very little resistance. They’re perfect. Booker offers the two pieces to the eaters around him for a personal examination. The same two gyoza are passed around eater to eater, gently caressed like a good luck charm.

It probably would’ve been less weird had the two gyoza originally come out of a paper bowl, but they emerged like doves from Booker’s hands. It might’ve been the only instance in human history during which a dumpling was passed around, by hand, between four people and did not reach a single mouth.

As Stonie walks toward the backstage area, one eater informs him of their discovery. “The gyoza are soft. They’re solid.” Stonie nods, smiles, and continues walking. 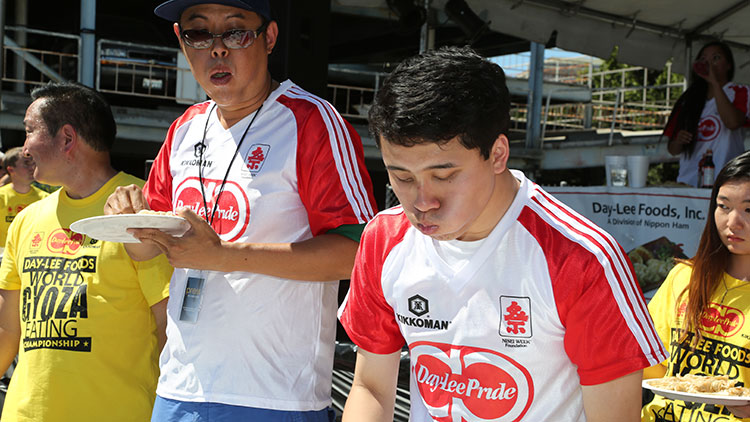 Two at a time, I told myself. Three chomps. Swallow. Repeat. Find the rhythm. Push through.

That didn’t go according to plan. There is a tradeoff made in making the gyoza softer — it converts into wet cement the second it is given a vigorous bite. For professional eaters who have trained themselves to inhale food, this is golden. For the unsuspecting, it’s the reason for the gag reflex firing off nonstop. Each bite needs a touch of liquid to lubricate the trip down. It’s a taxing way to eat. It’s physically and mentally exhausting to be so full of haste and so deficient in ability.

What’s remarkable to me about eating competitions, for newcomers, is how indiscriminate they are in shattering self-esteem. Go into competitive eating with high self-esteem and you’re bound to be knocked down several pegs, realizing firsthand how quickly the body will reject you.

Go into competitive eating with low self-esteem and suddenly you’re facing your own worst nightmare. The existential self-dialogue that you never wanted to have, you’re having it, all while watching yourself, detached, as the hands and mouth move in autopilot. There is self before the timer starts; there is esteem for the top eaters on the main stage at the end of competition. But there is no place for either, let alone both, in the zone between. Competitive eating is the complete loss of self. It is the willful bludgeoning of the senses. It is a rebellion against the body’s natural triggers, so that you are nothing more than receptacle for 10 minutes. The ego reemerges once the last traces of food crammed in an eater’s cheeks are gone. And it looks like hell — heaving breaths and melted faces exacerbated by the 90-degree weather outside.

I ate 66 gyoza in 10 minutes, tied for 12th place out of 16 competitors, and over two top-40-ranked eaters. I turned around and saw Chestnut and Stonie, looking worse than they did last year, by far. Barclay announced to the crowd that the world record of 268 had been shattered by more than 100 gyoza.

Chestnut set the new record with 384 gyoza, eating more than one for every other second of the contest. In second place? Stonie, with 377. Seventeen gyoza separated the two last year; seven this year. Competitive eating isn’t a game of inches, it’s a game of seconds (and thirds, and fourths). Over the last two years at the gyoza summit, the difference between the two best eaters in the world was 20 seconds of more efficient eating.

Barclay announced Chestnut’s name as world champion, and Chestnut and Stonie did what two humans at the top of their craft would do after eating a combined 761 gyoza: They smiled and threw small jabs at each other’s stomachs. I laughed in terror. I’m never doing this ever again.

It's Not Quite a Miracle, But the Angels Have Achieved AL West Salvation