Can Matt Stonie Bring About a New Golden Age in Competitive Eating? 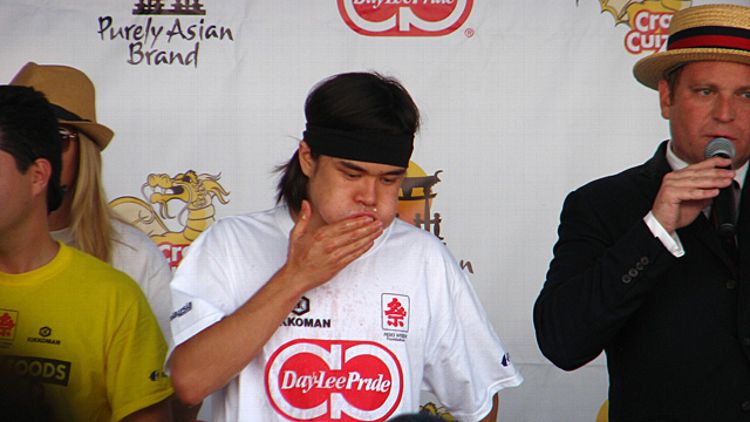 Matt Stonie was catatonic when he was declared the victor in the 2013 Day-Lee Foods World Gyoza Eating Championship held in the Little Tokyo district of Los Angeles in early August. He had the look of a young man who alone had to suffer the consequences of cramming more than 10 pounds of pan-fried Japanese dumplings into his digestive tract. He had set a new world record, been awarded $2,000, and won a flight to Tokyo, but it’s unclear how much of that registered in the moment. He, along with other top contestants, was also awarded a case of Sapporo beer, something he only recently was legally allowed to drink.

For fans keeping track at home, Stonie’s 268 dumplings would’ve seemed like a miracle. In a training video posted on YouTube leading up to the gyoza contest, Stonie struggled to keep down even 230 in his own backyard, four short of his total of 234 in 2012, and well short of the previous world record of 266 set by Joey Chestnut last year.

“It’s hard to compare training at home to the actual contest,” Stonie said. “The adrenaline, the crowd, and the competition are hitting you from all sides.”

Stonie, who is half-Japanese, was the crowd favorite, as the contest was part of a larger festival celebrating Japanese and Japanese American culture. Nicknamed “Megatoad,” Stonie is a San Jose, California, native who just turned 21 in late May. He is the fourth-ranked competitive eater in the world, fast becoming the new face of the sport. Stonie made his Major League Eating–sanctioned debut when he was just 18 at the 2011 World Deep-Fried Asparagus Eating Championship held in Stockton, California. He finished in third place in his very first go-round, just behind Pat Bertoletti, the second-ranked eater in 2011, and Chestnut, who has dominated competitive eating for the last seven years and has as much claim as Takeru Kobayashi as the greatest eater ever. Two and a half years later, Stonie has already bested Chestnut three times in 2013 alone.

Last night, the two competed against each other for the seventh time in 2013 at the Nugget World Rib Eating Championship held in Sparks, Nevada. Several hours before the contest, Chestnut spent half an hour in a live chat with fans for the Reno Gazette-Journal. At the tail end of the chat, a fan asked if he was going to beat Stonie, who Chestnut claims is currently his biggest rival in the sport. His response?

I’m not exactly sure what we’re supposed to fill that blank in with, but whatever he meant by that, he did it. Chestnut set a new world record with 13.76 pounds of ribs eaten in the allotted 12 minutes, consuming nearly six pounds more than his winning effort of eight pounds in last year’s contest. Chestnut ate 2.5 pounds more than Stonie, who finished second despite eating 11.2 pounds, beating his personal best by 3.5 pounds.

“Stonie has been working his butt off,” Chestnut told the Gazette-Journal before the contest. “He is making me work. I usually don’t practice for ribs.”

The rivalry with Stonie, which Vice recently narrowed in on, has been good for Chestnut, and even better for the sport of competitive eating.

It’s the kind of dramatic story line (the good kind) that MLE has been waiting for ever since Kobayashi, whose jaw-dropping eating feats gave competitive eating a major boost in legitimacy, was barred from sanctioned competition because of contract disputes. A high-profile rivalry between incumbent and ascendant — one not seen since Kobayashi and Chestnut — could send MLE into a new golden age. Stonie is game.

“My goals are nothing short of the top,” he said.

To get there, he’ll eventually have to usurp Chestnut’s seven-year reign over Nathan’s Famous Hot Dog Eating Contest, the crown jewel of competitive eating.

In the end, though, it’s not the other contestants you’re fighting in an eating contest — it’s yourself. Competitive eating is a physically and psychologically taxing ride, much like playing through pain or surviving multiple overtimes, condensed into a compelling, revolting 10-minute burst. What the sport lacks in artistry, it makes up for in the very visceral experience of watching someone exceed the body’s built-in limitations.

“The ability to become a great competitive eater is not only physical, but mental,” Stonie said. “Every contest is going to come with many discomforts and things you’d rather not do, but you have to keep your focus on the goal, winning.”

He prepares like one, too. At least some of his success can be attributed to breaking down film and studying tendencies of the greats. A few days before the rib contest, Stonie shared some of his findings in a YouTube video demonstrating to fans different rib-eating approaches, including the differences between Chestnut and himself. And like most athletes, asking Stonie about technique is an invitation down a rabbit hole. “I would describe my eating style as pretty ambitious,” Stonie said. “I go into the contest knowing that because I sprint the first few minutes, I will hit the wall harder later on, but regardless, I like to pull a quick lead at the start and just hope that I can somehow push myself to keep the lead for the remainder.” The sprinting worked in the gyoza championships. Early on in the competition, Stonie had a 75-50 advantage on Chestnut and it never let up, as he eventually won by 17 gyoza.

The way Stonie describes his style compared to Chestnut is like looking at two slight variants of the same imperfect machine. “From watching Joey’s style the past few years in gyoza, he tends to grab handfuls and push it down, whereas I pick up two every single time and maintain the pattern,” Stonie said. “I think the difference between Joey and myself on pacing really comes down to the amount of experience we have and what we’ve become comfortable doing.

“I am guilty of stuffing my mouth too much, though,” Stonie said. “Don’t ask me how it works.”

It really is a sight to behold. There is no difference in the sight of Stonie mid-contest and someone with a violent, hacking cough — the convulsive movement patterns, the placement of the hand over the mouth in hopes of keeping it all in, the head bouncing frontward and backward. But the cognitive dissonance of seeing Stonie enact those two very different actions in the same motion is somewhat alleviated by the understanding that neither is healthy in any way.

It shouldn’t be too hard for Stonie to keep his slim figure, though. He maintains a strict diet (salmon baked plain, baked potatoes, nuts, fruit) and a regular exercise schedule. Oh, and planning strict diets is kind of what he wants to do with his life. His college’s fall 2013 semester started this week, and he’s returning to classes that will help fulfill his degree in nutrition.