NCAA Puts Impermissible Pasta Story to Sleep (With the Fishes) 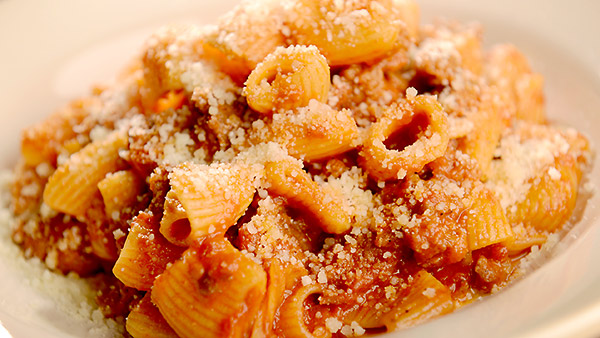 It had to end this way, didn’t it? The impermissible pasta story was too delectable to last.

Backing up: It was a day like any other. Oklahoma’s list of self-reported NCAA violations was seemingly a list like any other. We weren’t paying much attention to it. We were busy musing on Kain Colter’s hearing. Buried deep, though, was one spicy meatball:

Violation: Three current student-athletes received food in excess of NCAA regulation at a graduation banquet. The three had graduated from the school but returned for an additional season of competition. The players were provided pasta in excess of the permissible amount allowed. Resolution: The three were required to donate $3.83 each (the cost of the pasta serving) to a charity of their choice in order to be reinstated. The department provided rules education to applicable athletics department staff members.

And just like that, our week was made. Oklahoma’s rampant carbthuggery was decried from all corners of God’s green Internet. Bob Stoops was crowned the capo of capellini. A never-ending strand of pasta-based puns unfurled. Two of the student-athletes in question came forward. With offensive lineman diets now in the mix, and amid visions of poor interns measuring out dry pasta onto a food scale in a windowless office, we called around to work out how, exactly, they got to that $3.83 figure.

The answer is simple: It was a catered event, so all somebody had to do was bust out the itemized bill and divide the total price of pasta. As with all things involving linemen feeding, the key to savings is buying in bulk. There was no complex algorithm involved, but let’s not lose sight of the fact that just as it was somebody’s job to come up with $3.83, it was our job to ask about it, and the world spins madly on.

It was a delightful day of Internetting — until the NCAA took notice and transformed with practiced ease into that most hated of commentators, the Well Actually Guy:

Just to clarify… there are no NCAA rules regarding portion sizes, though we appreciate Oklahoma's commitment to play by the rules.

You monsters. Just let us have this.

Andrelton Simmons just signed a seven-year deal with the Braves. Read about why his talent is beyond belief.

Anonymous in Sochi: When Putin Comes to Your Home