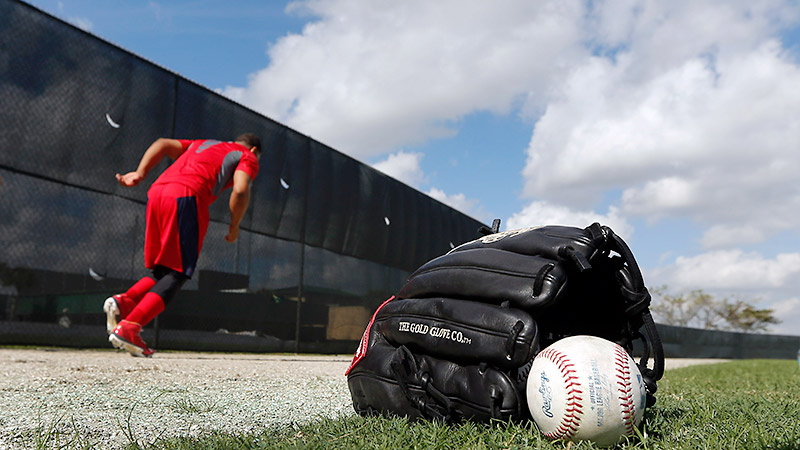 Once upon a time (yesterday), we examined the key question facing each American League team as spring training commences. Now let’s do the same for the 15 National League squads:

Arizona Diamondbacks: Can a sitcom dad build a winning team? GM Kevin Towers doubled down on his 2012-13 strategy this offseason, again trading a promising, young, cost-controlled outfielder for 50 cents on the dollar (Justin Upton last time, Adam Eaton this time) and jacking with a top pitching prospect’s mechanics before trading him for 50 cents on the dollar as well (Trevor Bauer last time, Tyler Skaggs this time). It actually worked out OK for the Diamondbacks last season, which probably means new acquisition Mark Trumbo will hit 50 home runs in 2014 or something.

Atlanta Braves: Is Dan Uggla about to lose his job to some guy named “Tommy La Stella”? Uggla was always kind of an odd second baseman, a defensive disaster who never ran well or hit for a high average, but who had the upside of superb power and plate discipline. Basically, he brought a first baseman’s offensive skill set in a second baseman’s body. Until his disastrous 2013 campaign, though, Uggla was never as bad as some made him out to be. He has never posted an OBP below .300, and until last year, he’d never had a wRC+ below 100, been anything worse than about a two-win player, or appeared in fewer than 146 games. Durability and offense are luxuries in a second baseman, and while Uggla took a lot of crap for delivering value in unconventional ways, he always delivered value until last year. But a team can only put up with two of its regulars (looking at you, B.J. Upton) hitting below .200 for so long, and Uggla, who’ll be 34 by Opening Day, might never return to form. La Stella isn’t all that great himself, but the assumption seems to be he’ll be better than Uggla unless Uggla shows signs of life this spring, and quickly.

Chicago Cubs: Wait, Alfonso Soriano is gone? Like, he’s not coming back? At all? Yes, he’s gone. No, he’s not coming back! It feels good, doesn’t it? Even more exciting: The Cubs have a thrilling group of young prospects who might replace him. Outfielders Albert Almora and Jorge Soler (who both rank among Keith Law’s top 30 prospects) will be in camp, as will shortstop Javier Baez and third baseman Kris Bryant (he of the prodigious power stroke and hypnotically beautiful blue eyes). If you want a more serious question, it’s this: When those guys all reach the majors in the next year or two, who’s going to pitch? The 2016 Cubs could be like Paul Westhead’s Loyola Marymount teams, and that’s a supremely exciting possibility.

Cincinnati Reds: What kind of manager will Bryan Price be? The Reds axed one of the game’s more distinctive managers in Dusty Baker. MLB managers are increasingly interchangeable, nondescript former catchers and middle infielders, but Baker had a personality and a set of tactics that were … well, let’s just say if you put Baker in charge of the Apollo program, he’d try to send three guys to the moon on a coal-powered rocket. The manager doesn’t move the needle much in baseball, but it’ll still be interesting to see how Price fills such distinctive shoes. Specifically: How will he deploy Aroldis Chapman? Will his Reds bunt less? Will he make Brandon Phillips be nice to beat writers? We’ll find out soon.

Colorado Rockies: What does a real pitching prospect look like? Rockies fans are about to find out. Baseball America’s Jim Callis says Colorado’s Eddie Butler and Jonathan Gray form the best pair of pitching prospects in any team’s system, and both are coming to spring training. Maybe they’ll succeed in suppressing offense in Denver, where the enormous ballpark and waterlogged baseballs have failed.

Los Angeles Dodgers: Which Matt Kemp will show up? From 2008 to 2011, Kemp never played fewer than 155 games. The past two years, though, he’s struggled to stay on the field. That’s problematic not only because a healthy and productive Kemp is worth five to eight wins, but also because there’s not really a true center fielder among Andre Ethier, Yasiel Puig, and Carl Crawford.

Miami Marlins: Who’s the odd outfielder out? If I had to bet on one team to make big gains on its 2013 win total, I’d choose the Marlins, and a big reason is the group of young outfielders who came up together last year: Christian Yelich, Jake Marisnick, and Marcell Ozuna. Two of those guys will probably crack the starting lineup, but with the Mighty Giancarlo Stanton manning right field, one will start the season on the bench. Spring training is key for these three prospects.

Milwaukee Brewers: How sick are you of hearing about Ryan Braun? Times are tough in Milwaukee. The Brewers play in one of baseball’s toughest divisions, they don’t have much upside, and the farm system is among the worst in the league. The team’s only star is coming off a 65-game suspension that would make him the face of the PED saga if not for a certain controversial third baseman. The Braun narrative is going to get really old, and it probably won’t go away, because there’s not going to be much on-field news worth discussing in Milwaukee. Brewers fans are nice folks, by and large — they deserve better.

Washington Nationals: Is Danny Espinosa really back? The Nationals are kind of like the independent-label Cardinals: a team practically without weaknesses. Unlike the Cards, though, the Nats are flying under the radar after missing the playoffs. If the Nationals do have a weakness, it’s at second base. They looked to be set with Espinosa, who played good defense, ran the bases well, and offset a low batting average with power and a decent OBP. But it all blew up last season when Espinosa hit .158/.193/.272. Right now, the Nationals are holding it together with Anthony Rendon at second, which is less than ideal for two reasons: First, while he has always had the goods with the bat, Rendon is a third baseman, and he plays second base like a third baseman. In fact, once Adam LaRoche’s contract is up, Ryan Zimmerman will probably move across the diamond, allowing Rendon to return to third. Second, while Rendon is holding it together at second far better than I would have anticipated, his body is held together with duct tape and optimism. Espinosa’s wrist, which he claims caused his startling collapse in 2013, is reportedly healed, and he’ll aim to win his job back this spring. Washington will be much better off in the long run if he can.

New York Mets: How large is Bartolo Colon? Signing a former Cy Young winner who’s coming off a four-WAR season for two years and $20 million is a pretty nice piece of business. Of course, Colon is also almost 41 years old, throws only one pitch, and is, well, spherical. But that’s the pond Sandy Alderson has to fish in now that his owners literally got bilked out of millions in a Ponzi scheme (and no, saying that now is neither less bizarre nor less funny than it was when the news first broke). Alderson also made a few other nice moves this offseason, adding outfielders Chris Young and Curtis Granderson. If a few things break right, including Colon’s voodoo working for another year, the Mets could finish as high as third in the NL East.

Philadelphia Phillies: How much will Cody Asche get overhyped? Hey, look, a left-handed-hitting infielder with a funny running style. You know, a biggish white guy who runs hard. He must be the next Chase Utley, right? This is what happens when a team abruptly stops winning division titles, and when the best players in the farm system, like Asche, are guys whose ceilings are somewhere around “average regular.” I just hope the poor kid doesn’t become a pariah when he’s a two-win player. Things are about to get weird and awkward in Philadelphia.

Pittsburgh Pirates: What’s the next step for Gerrit Cole? Last year, the Pirates brought up a then-22-year-old Cole, a beefy right-handed ace straight out of central casting, and rode him to the playoffs. Cole is a monster in the making, and while he might have the best stuff of any starting pitcher around, Pittsburgh’s going to need more swings and misses and more innings if it hopes to repeat, particularly now that A.J. Burnett has signed elsewhere.

San Diego Padres: Who’s going to get suspended this year? OK, that question is a little churlish and maybe a bit unfair. But here’s the thing: The Padres have very quietly put together a pretty solid, pretty exciting team — except that every time one of their position players has a breakout season, he gets banned 50 games for PED use. Yasmani Grandal is a catcher who can hit, which makes him a hugely valuable commodity, and Everth Cabrera is quietly becoming a fantastic leadoff hitter, but to quote The Damned United’s Michael Sheen: “You’re no good to the team and you’re no good to me if you’re suspended.” Worth noting: In limited action in 2013, Grandal hit .216/.352/.341, which translates to an OPS+ of 102 and a wRC+ of 100. Part of that is the run environment we’re in now, but it’s also that Petco Park doesn’t suppress offense so much as it takes offense to the lake, tells it about the rabbits, and shoots it in the back of the head.

San Francisco Giants: How is Tim Lincecum’s arm? Lincecum’s being paid for past performance, but if the Giants are going to hang with the Dodgers this year, Lincecum is either going to need to regain some of the 4 mph he’s lost off his fastball (which is worse than it sounds for a guy who works off his changeup) or reinvent himself to be able to pitch without his heater. Keep your radar guns handy this spring, people.

St. Louis Cardinals: Isn’t this organization the best? Doesn’t it have the best fans? Isn’t life swell? There are four or five teams on this list for which even one more mediocre starting pitcher could mean the difference between making or missing the playoffs. The Cardinals have more good pitchers than they can use. They also have a lineup that goes eight deep with legitimate big-league hitters. St. Louis crossed into the land of annoyingly good awhile ago, and it has only trivial question marks of which to speak entering spring training.