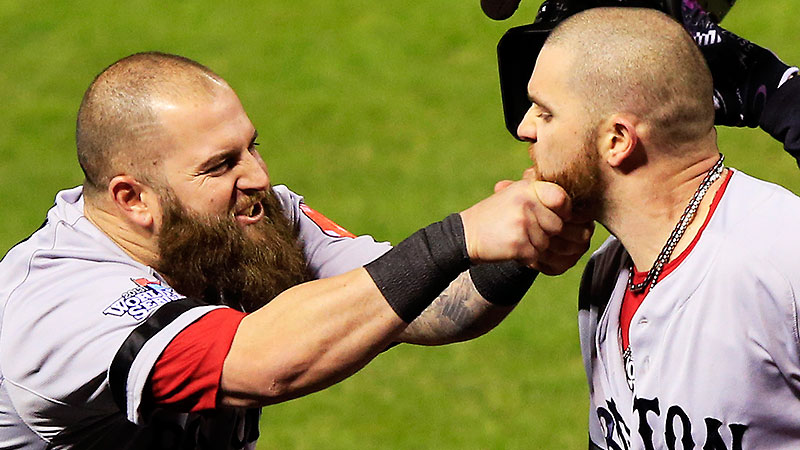 The false promise of spring training is that teams can go to Florida or Arizona and answer questions about roster construction during a few weeks of practice and exhibition games. This is a media construct. GMs don’t get to be GMs by thinking they can craft a team in a month. Most major league rosters are pretty well figured out before camp begins, and February and March are mostly about locking in the margins.

Spring training is, however, when teams’ biggest issues start coming into focus, and in the ensuing weeks, we’ll get a better sense of how these issues will shake out. Today, we look at the key question facing each American League team as spring training commences.

Baltimore Orioles: How is Manny Machado’s knee? If the Orioles hope to keep punching above their weight in the crowded AL East, they’ll need third base phenom Manny Machado to return from his knee surgery soon, and at full strength. Mini Keg may or may not not be ready for Opening Day, but the O’s will take any positive signs they can get this spring. Machado was recently cleared to resume some baseball activities well ahead of schedule, so that’s a pretty good start.

Boston Red Sox: Have the champs shaved those stupid beards yet? Other questions: Has Mike Napoli sobered up and found his shirt? Will David Ortiz’s weight loss affect his jolliness? Is it weird that these are genuinely the most interesting questions surrounding the world champions?

Chicago White Sox: Has GM Rick Hahn suffered an injury from patting himself on the back? The White Sox were in rough shape when Hahn took over in 2011, but he has attempted to change that this offseason. Hahn added Cuban slugger Jose Abreu via free agency and acquired center fielder Adam Eaton and third baseman Matt Davidson in a trade with the Diamondbacks, in the process cashing out on two high-volatility pitchers in closer Addison Reed and screwballer Hector Santiago. Nobody ever went broke betting that Kevin Towers would give up on his young players too early.

Cleveland Indians: Can the Tribe find another starter before Opening Day? Who would have predicted 10 months ago that losing Ubaldo Jimenez and Scott Kazmir would be a major obstacle for Cleveland? And yet here the Indians are, entering camp with just three starting pitchers (Justin Masterson, Danny Salazar, and Corey Kluber) we can credibly call either “good” or “reliable.” Zach McAllister is a passable back-end starter, but beyond him, things get grim. Carlos Carrasco and Trevor Bauer have the stuff, but both have developed a history of going to pieces on a major league mound. And if the Indians put Tyler Cloyd and his mid-80s fastball up against, say, Miguel Cabrera, the corner infielders will need to wear helmets. I’m really high on Cleveland, but the Indians need to find another live arm if they hope to return to the postseason. The window’s open in the AL Central now, but it won’t stay that way for long.

Detroit Tigers: Is Nick Castellanos ready? The plan was to use top prospect Castellanos in left, but the Prince Fielder trade coupled with Jhonny Peralta’s departure knocked over a set of dominoes that resulted in an infield that should be offensively comparable to last year’s without being quite so defensively horrifying. The 2014 projections for Castellanos are all over the map — Dan Szymborski’s ZiPS thinks he’ll be a solid regular, while PECOTA says he’ll be below replacement level — so in terms of question marks that could swing a pennant race, Castellanos is at or near the top.

(Bonus question: Did Dave Dombrowski finally get a left fielder who’s worth a damn? The answer to this question is an emphatic “Rajai Davis.”)

Houston Astros: Is there a way to fast-forward to 2015 spring training? Mark Appel, Carlos Correa, and George Springer aren’t up yet, which means nothing Houston’s baseball team does this spring will be as important as what Houston’s football team does with the no. 1 pick in the NFL draft. Don’t deny us the J.J. Watt/Jadeveon Clowney bookend. I’m going to be seriously upset if the Texans chicken out and draft a quarterback.

Kansas City Royals: Is Yordano Ventura about to become a household name? The Royals’ bullpen is built around short guys who throw really hard, and the same might soon be true for their rotation. Ventura got a cup of coffee last September, and he has a shot at breaking the rotation this year. The Royals have James Shields and Jason Vargas penciled into the top two spots, but apart from Shields, no K.C. starter is anything special. In the coming weeks, Ventura can be for the Royals what Jackie Bradley was for the Red Sox last year: a fast riser who’s viewed largely as a future contributor, but who could still break camp with the big club if he delivers a big spring. Ventura is only 5-foot-11, and guys that short tend to wind up in the pen, but he boasts a starter’s arsenal, including an upper-90s fastball and a sharp curve that’ll make hitters’ hair stand on end.

Los Angeles Angels: Are Albert Pujols and Josh Hamilton dead, or merely resting? Typically, when so much money is spent so thoughtlessly for so little return, the Department of Defense is involved. The truth is that while neither Pujols nor Hamilton came close to justifying their $33 million in combined salary last season, they both put up respectable batting lines by season’s end. The Angels have a huge advantage because they have the best player in the game for the league minimum, but if Pujols and Hamilton flail again, that Mike Trout edge will be negated. The team hopes that rest has eased Pujols’s plantar fasciitis and that Hamilton’s 2013 was an aberration. We’ll start to get a sense this spring if either of those will prove true.

Minnesota Twins: Can Phil Hughes and Vance Worley put it all … [collapses into laughter] This team is going to be really good in a couple of years, but let’s not kid ourselves: The Twins will become relevant the day they call up Miguel Sano. But hey, that might actually make the Twins more relevant during spring training than during the regular season. At least we know we’ll see Sano and fellow phenom Byron Buxton then.

New York Yankees: OK, really, what about that infield? The Yankees won’t have Robinson Cano or Alex Rodriguez, and Derek Jeter and Mark Teixeira are increasingly old and busted. Brendan Ryan is so much better than Jeter defensively that Ryan’s inability to hit, while frustrating, isn’t the biggest worry. That’d be Brian Roberts, who was one of the best second basemen in the game the last time he was healthy — which was in 2009. Kelly Johnson is apparently the answer at third base, where he’s made a whopping 16 career starts. SB Nation’s Mike Bates is rooting for Jeter to move to third in an ostentatious and self-sacrificing gesture to cover the hole created by the villainous A-Rod’s suspension. It would make for incredible theater, and I’m totally on board. Jeter resumed baseball activities three weeks ago; he might as well learn a new position this spring while he’s relearning how to walk.

Oakland Athletics: How is Yoenis Cespedes looking? It’s a legitimate concern. Cespedes had a terrific first campaign in 2012, and probably would have won Rookie of the Year honors in any season in which Trout didn’t also debut. Cespedes regressed in 2013, however. While he hit 26 home runs, he lost 124 points of OPS and went from performing at an All-Star level to being largely pedestrian. His peripherals weren’t good, either, as his walk rate and line drive rate dropped while his strikeout rate rose. That needs to change not only for Oakland’s sake, but for Cespedes’s sake as he approaches free agency.

Seattle Mariners: Can the entire team learn to play defense this spring? Unfortunately for Seattle, which added Cano, Logan Morrison, and Corey Hart to a lineup that already features Justin Smoak and Jesus Montero, the answer is “no.” Rumor has it the Mariners might also add Nelson Cruz. Seriously, do the Mariners know they can’t DH five or six guys at once?

Tampa Bay Rays: Can someone tell Matt Moore where the strike zone is? After David Price leaves for a compensatory draft pick — because Tampa Bay is never going to be far enough out of first place this season to justify trading him — there will be legitimate questions about how long the Rays can cobble together a contender when they’ve gotten bugger-all out of the draft since 2007. Until then, we need to start asking serious questions about whether Moore, who got four Cy Young votes last year, is going to be able to replace Price. Moore went 17-4 last year with a 3.29 ERA, which looks mighty impressive. But dig deeper and you’ll notice that despite making 27 starts, he failed to qualify for the ERA title. Among pitchers who threw 150 innings or more in 2013, Moore was second in walk percentage. That’s not the end of the world on its own; Yu Darvish was ninth, but his strikeout percentage was also half of what Moore’s was, and Darvish threw about 60 more innings, or, using Moore’s average of about 5.1 innings per start, almost 11 more games’ worth of innings. Of course, Moore’s entering his age 25 season, and there was a time when Clayton Kershaw walked a guy every other inning, too, so things could easily get better. But it’d be convenient for Andrew Friedman and the Rays if they started to get better this spring.

Texas Rangers: Is there a type of precipitation that rhymes with “Darvish”? You know, because of that old gag about “Spahn and Sain, then pray for rain” and all that. I actually think the Rangers’ starting rotation will be just fine, not because I have faith in any particular pitcher other than Darvish, but because of sheer numbers. Concerns include Matt Harrison’s back, Alexi Ogando’s stamina, Martin Perez’s strikeout rate, and Colby Lewis’s elbow and hip, but at least a couple of those are bound to work out until Derek Holland returns from a knee injury he suffered when he tripped over his dog. Maybe the Rangers should stop asking questions about pitching and start asking questions about omens.

Toronto Blue Jays: What does a beer cost at the Rogers Centre nowadays? I really wanted Alex Anthopoulos’s reenactment of the baptism scene in The Godfather to work out. It was bold, it was unorthodox, and it threatened to upset the entire balance of power in the AL East. But it didn’t work. Now the likes of Noah Syndergaard and Jake Marisnick are making waves elsewhere, and Baseball Prospectus’s PECOTA is calling for another .500-ish season in Toronto. But Blue Jays fans can take solace this spring, because none of that is the most embarrassing thing about Toronto sports right now. Quickly, a list of the most embarrassing things about Toronto sports at the moment:

1. Rob Ford’s neckties.
2. David Clarkson’s contract.
3. Tyler Bozak being a no. 1 center.
4. The Blue Jays going on 21 seasons without making the playoffs despite trading for R.A. Dickey and Jose Reyes.

OK, so the Jays do make the list. But at least they’re operating behind a world-class smoke screen.