Most Valuable, Period? Felix, Kershaw, and the Pitcher-as-MVP Debate 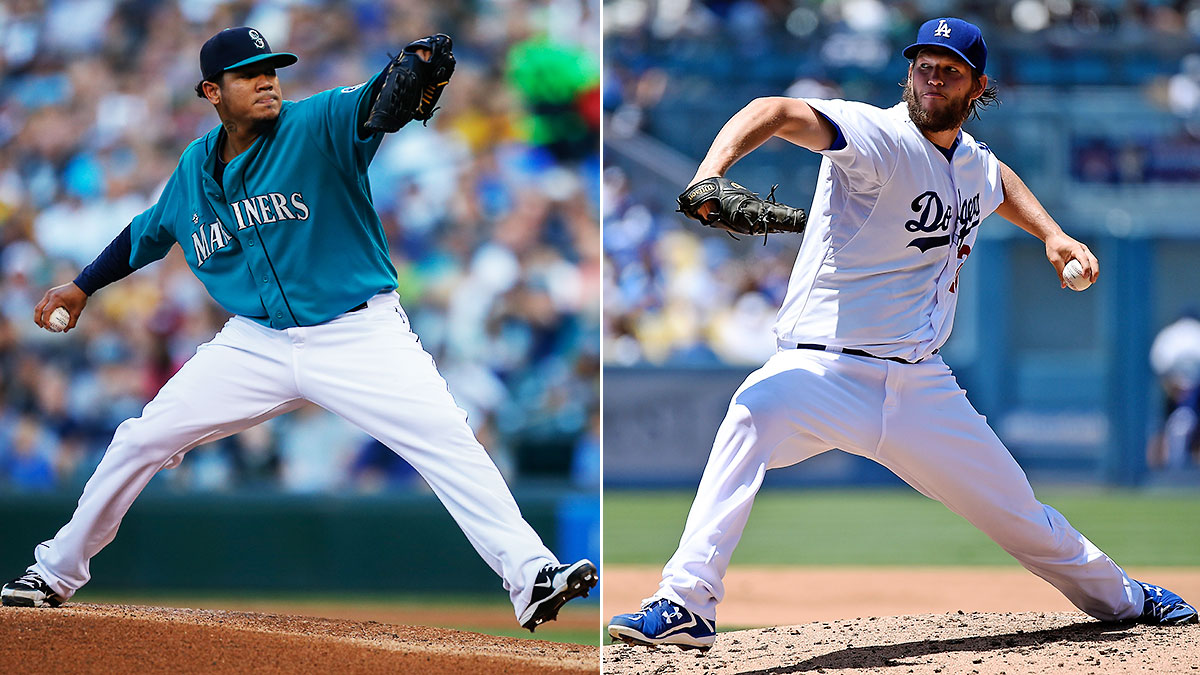 There’s no denying the incredible seasons Clayton Kershaw and Felix Hernandez are having.

Kershaw’s 2014 achievements have been remarkable: He threw a 15-strikeout, no-walk no-hitter that ranks among the best pitching performances of all time; he made a run at Orel Hershiser’s scoreless innings record; and he’s posted a 1.78 ERA that would be the second-lowest over a full season in 14 years, trailing only the unfathomable 1.74 mark Pedro Martinez set in 2000, during the height of the PED era. After spending six weeks on the disabled list and then getting rocked by the Diamondbacks in a May 17 start scientists still might not understand 500 years from now, Kershaw has ripped off one of the greatest stretches ever for a starting pitcher, with 135 strikeouts, 16 walks, five home runs, a 1.26 ERA, and an opponents’ batting line of .179/.213/.262 over 15 starts and 114 innings pitched. He’s even contributed with his glove and his bat:

Hernandez hasn’t been too shabby: On July 30, he broke a pitching record that had stood for 43 years, limiting the Indians to two earned runs over seven innings, marking the 14th consecutive time he’d allowed two or fewer runs while tossing seven or more innings, and topping Tom Seaver’s previous record of 13. Since then, Felix has held the Braves to one run in eight innings on August 5, and the Blue Jays to one run in seven against on August 11, striking out 16 combined batters while walking just one, and extending his streak to 16. In the 10th season of what’s rapidly becoming a Hall of Fame career, Hernandez is on pace to post the best strikeout, walk, and home run rates of his career, with a 1.95 ERA that would trail only Pedro, Roger Clemens, and Kershaw (twice) over those aforementioned 14 years.

With apologies to Chris Sale, Corey Kluber, Jon Lester, Adam Wainwright, and other pitching luminaries, Kershaw and Hernandez are the clear favorites to win this year’s Cy Young Awards. The thing is, they might not stop there: Given their current pace, Kershaw and Hernandez are making strong arguments to also win their leagues’ Most Valuable Player awards. And even that mere possibility makes for a fascinating debate, one that dredges up biases against pitchers competing for the honor, the vagaries of one particular advanced stat, and the spectacular rarity of pitchers actually taking home MVP trophies.

The first piece of Most Valuable Player hardware was awarded in 1931, which means the award has been issued 166 times over an 83-year span. Pitchers have won just 21 of those 166, and even that figure is deceptive: Only 10 pitchers have won the MVP since 1956, the year the Cy Young Award was introduced, giving voters another way to honor the best pitchers in the game. Since ’56, BBWAA members tasked with voting have heavily favored position players for MVP, reasoning that the best pitcher should simply win the Cy Young. Only once in MLB history have pitchers won the MVP award in both leagues in the same season: 1968, the famous Year of the Pitcher, in which Denny McLain won 31 games and tossed 336 innings and Bob Gibson posted an impossible 1.12 ERA, with both pitchers benefiting from sky-high pitching mounds, 145-pound middle infielders, and ballparks the size of Yellowstone.

Voters aren’t the only ones who display this bias. Last week, I struck up a conversation with Baseball Tonight analyst Mark Mulder about the leading MVP candidates. When Kershaw’s name came up, Mulder furrowed his brow — not because he doesn’t admire Kershaw’s performance, but rather because the Dodgers’ lefty is a pitcher. “The MVP award is for hitters, and the Cy Young Award is for pitchers,” Mulder said. “I’ve always believed that.”

Tribalism is a common trait among all kinds of people, pitchers included; we tend to favor our own group. Well, Mulder was one of the best pitchers in the American League while in Oakland, winning 21 games and finishing second in Cy Young voting in 2001. That he’d speak out against a pitcher, a member of his own group, winning MVP honors speaks volumes.

Mulder is far from the only person who feels this way. The rare MVP awards for pitchers have come during seasons in which no position player put up flashy enough stats to dazzle the voters; the pitchers won by default. The last pitcher to win it, Justin Verlander, posted truly extraordinary numbers in 2011, leading the league in ERA (2.40), innings pitched (251), strikeouts (250), and, in a nod to old-school stats that most certainly still dazzle many voters, wins (24 wins against just five losses). Several AL position players had big years: Jose Bautista hit .302 with 43 homers and a .447 on-base percentage; Dustin Pedroia whacked 21 homers, swiped 26 bases, hit .307, scored 102 runs, and played elite defense; and Jacoby Ellsbury cranked 32 bombs, stole 39 bases, hit .321 and was excellent in center field. But none of those players approached the kind of shiny offensive milestones that, say, 2012 Triple Crown winner Miguel Cabrera reached. So Verlander won both the MVP in addition to the Cy Young.

Aside from the existence of the Cy Young Award, one of the biggest arguments against pitchers winning MVP is the idea that a staff ace plays only once every five days, whereas the best position players are on the field daily. This seems like a reasonable point of view, until you consider how many batters a top pitcher faces over the course of a season. Adam Wainwright led the majors last season with 956 batters faced. Meanwhile, the leader in plate appearances was Joey Votto, with 726.

Another argument posits that position players affect the game in more ways than pitchers, since the good ones offer more defensive value and run the bases better. This argument carries more weight than the every-fifth-day fallacy.

Fortunately, we have a stat that attempts to account for all of these factors and measure player value: Wins Above Replacement. FanGraphs and Baseball-Reference.com use two different versions of WAR to measure player value, and the two tend to diverge most when it comes to ranking pitchers, because FanGraphs uses Fielding Independent Pitching as its baseline for pitcher value, while Baseball-Reference.com simply uses runs allowed; both consider innings pitched, since WAR is a counting stat. But here’s the kicker: Kershaw and Hernandez both lead their respective leagues among both pitchers and position players on FanGraphs. On Baseball-Reference.com, Kershaw leads the NL in WAR, while the man they call King Felix ranks third in the AL, trailing Mike Trout and Josh Donaldson by a slim margin.

Admittedly, WAR is far from perfect. Having to reconcile two versions of the same stat is already problematic, and on top of that, there’s the defensive component of the stat, which can be wonky in smaller samples. By Ultimate Zone Rating, the defensive component of FanGraphs’ WAR, Trout ranks 15th out of 16 qualified center fielders this season, costing his team about six runs after adjusting for the position he plays. If you’ve watched Trout’s jaw-dropping highlight reels, this might seem crazy to you.

And it should: That same UZR stat rated Trout as a +13 two years ago. Since 10 defensive runs saved equates to one Win Above Replacement by WAR’s formula, that means Trout has been worth about two fewer wins this year than in 2012 based on defense alone. Even granting that 2012 saw Trout make some impossible plays — including four catches that were considered home-run rob jobs — that kind of variance looks odd.1 And while any stathead worth his salt would advise looking at WAR and many other stats in three-year samples to strip out statistical noise, that’s no easy task for MVP voters who must rank players one season at a time.

On top of all of that, WAR severely underrates catchers. For instance, Brewers All-Star backstop Jonathan Lucroy trails Kershaw, McCutchen, Giancarlo Stanton, and others in both versions of WAR, which doesn’t account for Lucroy’s quantifiable ability to frame pitches for strikes, nor the multiple tougher-to-quantify contributions he makes to a team, all the way down to knowing when to come out to the mound, throw his arm around a struggling pitcher, and give him a moment to breathe. In other words: You could make a strong case for Trout and Lucroy as the MVPs in their respective leagues, even if WAR doesn’t agree.

And that brings us back to where we started, with Kershaw and King Felix. Both pitchers are enjoying transcendent seasons, both have solid MVP arguments thanks to world-beating streaks and seasons, and both have candidacies that benefit from WAR, an increasingly relied-upon stat. There are also plenty of arguments against both, from possibly unfair biases against pitchers to very reasonable cases for other great candidates, plus questions about the stats we can and should use to argue player value. And that’s all before factoring in some voters’ claim that an MVP must come from a playoff team, as if players have some magical ability to choose their teammates.

But if nothing else, let’s at least insert the two best pitchers on earth into the discussion for this year’s MVP awards. As soon as the season ends and the numbers are in, we can debate this all over again.

The NFL’s All Make-or-Break Team