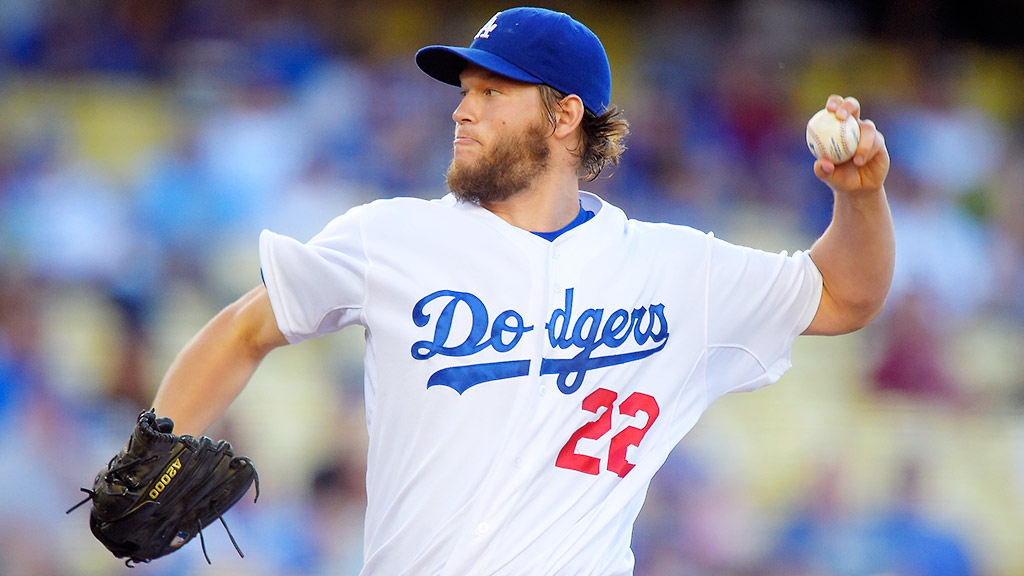 “I don’t really care about an innings streak or whatever. We’re not supposed to give up runs. That’s our job.”
— Dodgers pitcher Clayton Kershaw after Thursday’s game

Last night’s matchup between the lowly San Diego Padres and the otherworldly Clayton Kershaw seemed like the closest thing to a guaranteed shutout we’d see all year.

The Friars are suffering through a historically miserable season, having posted the lowest single-month team batting average ever (.171 in June), and facing the prospect of finishing the year with the lowest team on-base percentage in a century. Kershaw, meanwhile, had delivered 36 consecutive scoreless innings entering Thursday’s game. With the Padres on pace for one of the worst offenses since the dead ball era, and with Kershaw annihilating the league since mid-May, predicting a run seemed more bold than predicting a no-hitter.

Well, the no-hitter didn’t happen, and neither did the shutout. Kershaw held San Diego scoreless for the first 5.2 frames, running his streak to 41 and prompting Vin Scully to masterfully compare each inning to “another pearl on the string.” But with two outs in the sixth, Padres third baseman Chase Headley cracked a homer over the wall in left-center.

While the streak made for scintillating viewing, it was just one of the many feats Kershaw has managed during his astounding season, and we shouldn’t lose sight of that. So, with the help of ESPN Stats & Info (special thanks to Lee Singer), we’ve assembled 22 factoids to illustrate how dominant the guy who wears no. 22 has been.

1. Kershaw didn’t catch Orel Hershiser, but he did tie for the fifth-longest consecutive scoreless innings streak of the expansion era (since 1961).

A couple of notes on this list: First, it’s not surprising that both Drysdale and Gibson delivered their huge streaks in 1968. That was the Year of the Pitcher, with sky-high mounds, spacious ballparks, big strike zones, 147-pound middle infielders, and a wave of pitching talent producing some of the gaudiest numbers of all time. Drysdale’s streak ended on June 8, 1968, while Gibson’s started two days earlier.

Second, Hershiser’s credited total of 59 consecutive scoreless innings fails to capture the true extent of his excellence at that point of his career. That total doesn’t include the eight scoreless innings he pitched in Game 1 of the 1988 NLCS, nor the two-thirds of a scoreless inning he pitched at the start of the following season, on April 5, 1989. Combining the regular season and postseason, Hershiser hurled a ludicrous 309.2 innings during the Dodgers’ World Series campaign.

Kershaw was always a long shot to match Hershiser’s 67.2 scoreless innings, and he’ll never hurl 309.2 innings in a single season, but joining these guys on a top-five list is still quite an achievement.

2. One instructive way to measure pitcher performance is with Fielding Independent Pitching (FIP), which focuses on the things a pitcher can best control, like strikeouts, walks, and ground ball rate, rather than the things influenced by defense and luck. FIP runs along a similar scale to ERA, so 5.00 and higher is bad, 3.00 and under is very good, and 2.00 and under is fantastic.

Kershaw’s FIP is currently 1.58. If that holds up, it’ll be the second-lowest mark for any starting pitcher in a century. Only Pedro Martinez’s 1.39 mark in 1999 was better. And based on how well he’s pitching, it just might hold up: Since the beginning of June, Kershaw is 8-0 with 80 strikeouts and an 0.74 ERA in eight starts. According to Elias, Kershaw is the only pitcher in MLB history to win eight consecutive starts within a single season while also delivering at least 80 strikeouts and an ERA under 1.00 during that span.

Kershaw struck out 11 batters on Thursday, and he got the win.

4. Kershaw’s streak was starting to overshadow this season’s signature pitching moment: the no-hitter he threw against the Rockies on June 18.

In that game at Dodger Stadium, Kershaw struck out 15 batters and walked none, giving him the most punchouts ever recorded in a no-no that didn’t feature a walk. He was a seventh-inning Hanley Ramirez error away from a perfect game. Per Bill James’s Game Score stat, Kershaw’s gem graded out as the second-best pitching performance of all time, with his 102 score trailing only the 105 that Kerry Wood registered during his 20-strikeout masterpiece in 1998.

5. When Kershaw next faced the Rockies, on July 4 in Denver, he allowed two singles, one walk, and no runs while striking out eight in eight innings. It wasn’t a no-no, but consider this: While Dodger Stadium is one of baseball’s friendliest parks for pitchers, Coors Field has been by far the friendliest park for hitters this year, with the Rockies hitting .313/.364/.508 at home this season. A pitcher has held the Rockies to two singles or fewer just five times in Coors Field history.

6. Given the result, the quality of competition, and the venue, last night’s start against the Padres was probably Kershaw’s sixth or seventh best of the year. Which is, in a word, insane. Kershaw allowed just one run on three hits and one walk, while striking out 11 and producing 24 swings-and-misses over nine innings.

The lesson: Even Kershaw’s sixth- or seventh-best start is a thing of beauty. He showed off his diverse repertoire in crushing Padres bats all night long, and his curveball was, as usual, nasty.

7. During his 41-inning scoreless streak, Kershaw faced 146 batters and allowed just three extra-base hits. All three of those came from the Cardinals on June 29 … a game in which Kershaw tossed seven scoreless innings and fanned 13.

8. Kershaw faced 19 batters with runners in scoring position during the streak. In those 19 tries, not one batter hit the ball out of the infield.

9. Only three of the 146 batters that Kershaw faced during the streak reached third base. Two of those three got on base thanks to an error.

11. Kershaw retired the leadoff batter in 36 of the streak’s 41 innings (88 percent). The MLB average for retiring the leadoff man is 69 percent.

14. Opponents were 5-for-70 (.071) with 42 strikeouts in at-bats ending with a Kershaw breaking ball. They put 28 balls in play against those pitches and hit just two hard, according to Inside Edge.

Over his last 69 innings, Kershaw has given up as many runs — seven — as he did in 1 2/3 innings against the Diamondbacks on May 17.

19. Some of Kershaw’s other potential career bests this season include:

20. Kershaw has induced whiffs on 30.3 percent of the swings against him, which puts him first in the majors and on pace to best his previous career high of 25.8 percent.

21. From 2008 through 2013, Kershaw ranked 86th among 145 qualified starters in ground ball rate, 43.9 percent. This year he ranks fifth, at 56.3 percent. His current combination of high strikeouts, low walks, and lots of ground balls is unlike anything we’ve seen in recent years.

Check out the scatter chart below to see how off-the-charts Kershaw’s performance has been. 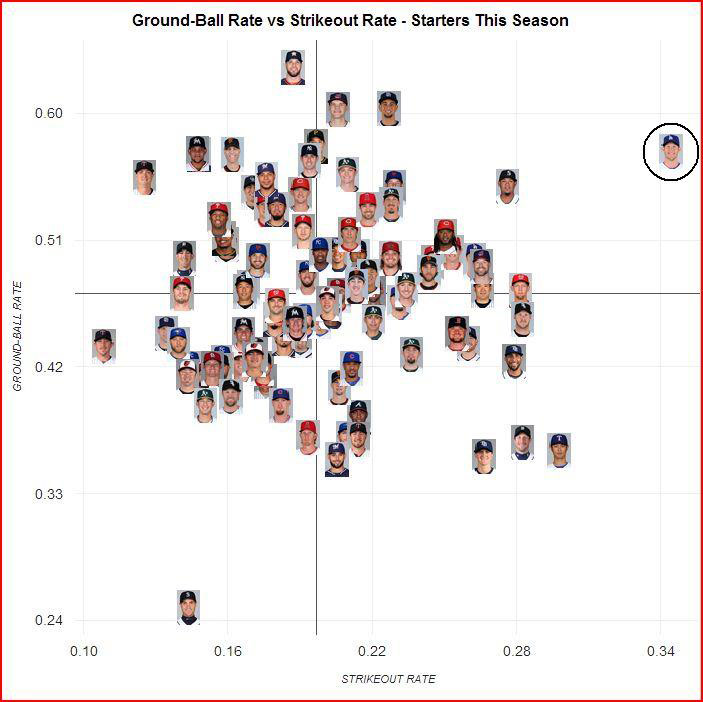 22. Last May, I wrote an in-depth feature on Kershaw in which I chronicled his famous curveball (which Scully dubbed “Public Enemy Number One” when Kershaw was still a teenager), his out-of-nowhere wicked slider, his supernatural focus during games (go read that feature, if only for the Josh Lindblom story), and much more. The underlying question was Kershaw’s growing status in Dodgers lore, and whether we could reasonably compare him to the most revered left-hander in franchise (or baseball) history: Sandy Koufax.

Comparing the two is tricky, given the different eras in which they pitched. Koufax topped 300 innings pitched in three of his final four major league seasons, and that’s not counting his postseason heroics. In 1965, he went 26-8 with a 2.04 ERA and 382 strikeouts in 335.2 innings pitched, leading the league in innings, wins, winning percentage, ERA, strikeouts, strikeout rate, strikeout-to-walk rate, hit rate, and shutouts, winning the NL Cy Young Award and finishing second in MVP voting. He then threw 24 more innings in the postseason, all of those occurring during the World Series, since the baseball playoffs featured only one round back then. In those 24 innings, Koufax struck out 29 batters and walked five while allowing 13 hits and just one earned run, earning his second World Series MVP Award. We’ll never see Kershaw, or any modern-day pitcher, do anything like that.

Like Drysdale and Gibson, however, Koufax played during the most accommodating time for pitchers since the dead ball era. Back then, pitchers could take it easy every third inning, knowing they’d probably be fine against the scrawny infielders and feckless pitchers at the bottom of the order. Those light lineups enabled elite pitchers to excel while toiling in a four-man rotation, going the distance more often than not, and racking up massive innings totals. While offensive levels are certainly down from the height of the PED era (Pedro Martinez’s peak, given that era, looks like effing science fiction), Kershaw still pitches under much tougher circumstances than Koufax ever did, exerting maximum effort on every pitch as he tries to navigate tougher lineups in tougher ballparks. So maybe the best we can do is credit Koufax for his unreal durability in his prime, but also acknowledge that it’s a vastly different game now, and that Kershaw routinely ranks among the league leaders in innings pitched today.

We do want to try for some kind of apples-to-apples comparison, though. FanGraphs tracks a stat called ERA-, which takes a pitcher’s earned run average, adjusts for park and league effects, and then spits out a number that’s calibrated against a 100 average. An ERA- of 80 would thus be 20 percent better than league average (lower ERA is better, so this makes sense), while a 120 ERA- would be 20 percent worse. And since this stat adjusts for the level of competition each pitcher faced in his era, it doesn’t matter if Koufax had an easier time of it then than Kershaw does now. Koufax’s peak lasted six years (the last six of his career), while Kershaw is now in his sixth season as a full-time starter for the Dodgers, so we have a pretty similar sample to use here, though admittedly one that gives Koufax a huge break, since he was an ordinary pitcher or worse for much of his pre-1961 career.

The results for Koufax:

The results for Kershaw:

You know what? The kid’s got a case.

A Tactical Preview of the World Cup Final

A Perfect Storm and a Perfect Ending: LeBron’s Going Back to Cleveland