The State of the Shift: Why Won’t More Teams Move Their Infielders? 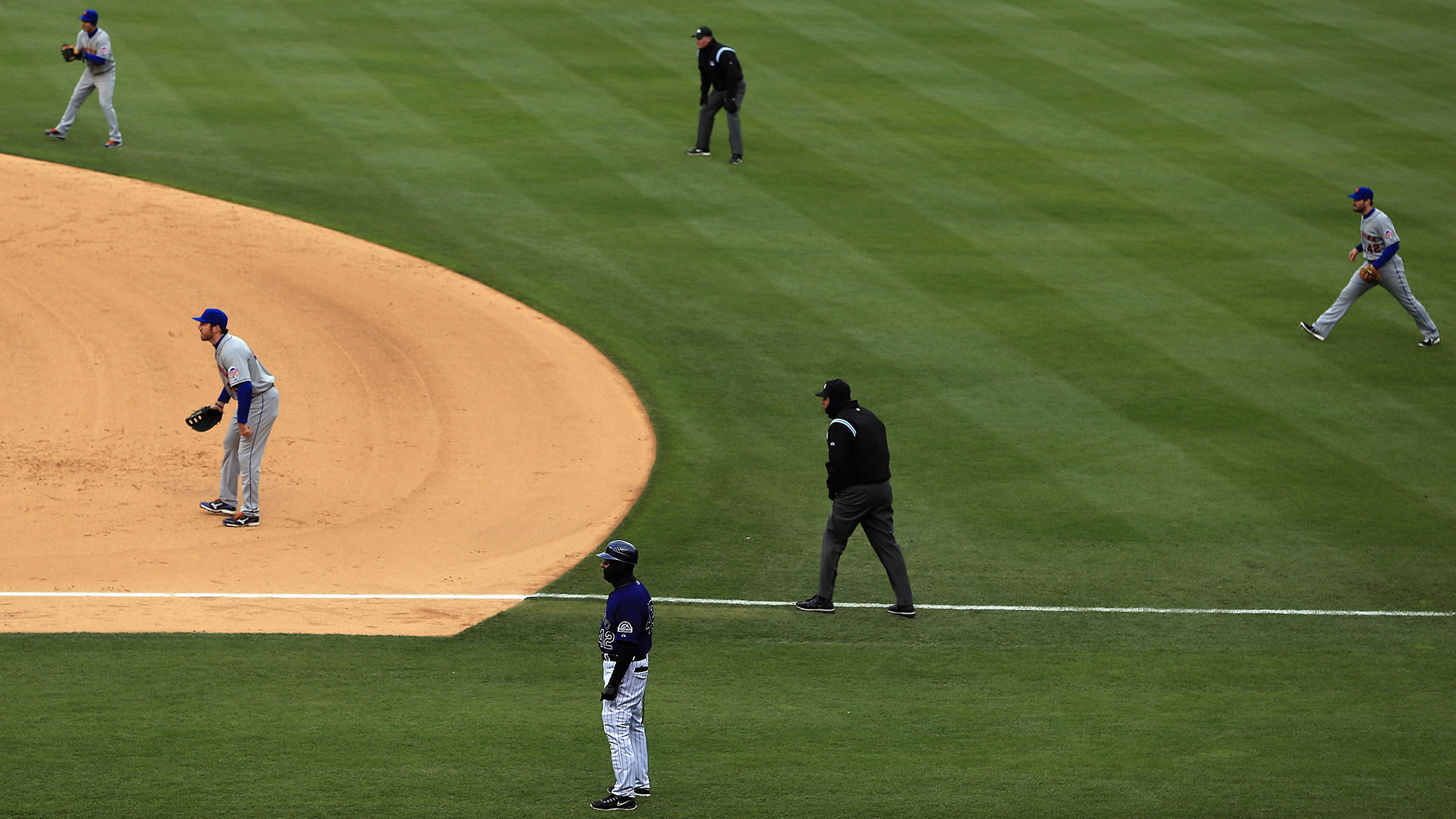 Earlier this month, in the sixth inning of a game against the Phillies, Nationals color man F.P. Santangelo did something you rarely see from an announcer: He expressed sympathy for the other team.

With the defense shifted against him, Nationals second baseman Dan Uggla lined a single up through the center of the infield.

“I’m sorry,” Santangelo said. “All the shifting in baseball … I understand that it’s working, but I just love it when somebody beats a shift. I think it’s so cool. Especially when it’s right where somebody would have been standing for 130 years.”

“Yeah! It is,” Santangelo said. “And I don’t care who you are standing on that mound: If you’re a pitcher, and you get a ground ball that was supposed to be right at somebody, that’s gotta hack you off a little bit, doesn’t it?”

He went on: “I mean, you see it work all the time, but when somebody beats it, I just love it. It’s like, ‘Take that, smart guys.’”

Baseball Info Solutions has been tracking the number of shifts by each team since 2010. In Year 1 of the sample, the famously progressive and experimental Tampa Bay Rays were baseball’s shiftiest team, doing so 242 times. Although we’re not yet through April, this year’s most shift-happy club, the Houston Astros, is already at 198 shifts in 20 games. It’s clear: Teams are moving their infielders around far more often than they did five years ago.

The frequency with which managers order the shift is new, but the practice itself isn’t — not by a long shot. Though no one is quite sure exactly when the first manager ordered three infielders over to one side of the diamond, teams that visited the hitter-friendly Baker Bowl regularly shifted against lefty-swinging Phillies slugger Cy Williams during the 1920s. But the most infamous shiftee of all time was Ted Williams, who started seeing exaggerated defensive alignments in 1946 against the Indians and manager Lou Boudreau, and then eventually came to see it almost everywhere he went. Back in the ’40s, as now, the shift was a strategy you could use to shave a few points off pull-happy sluggers’ batting averages, saving your team a handful of runs per season.1

Still, despite years of evidence telling us the shift proffers some benefit, the gulf between the biggest shift adopters and biggest resisters remains gigantic. The Astros are on pace to shift about 1,600 times this season, more than six times the projected total for their in-state rivals, the Rangers.

As president of Baseball Info Solutions, Ben Jedlovec has worked with 22 of the 30 MLB teams. While he can’t reveal the results of any one interaction with any specific team, he says that much of the reluctance to shift comes down to something baseball’s used to at this point: resistance to change.

“I’ll be sitting across from bench coaches and infield coaches, and we get all kinds of feedback from them,” Jedlovec said. “They’ll talk about players who don’t intuitively grasp the idea: ‘I’m working with Infielder X, who wants to be told exactly where to stand.’”

A team executive I spoke to gave a similar suggestion: Although he’d like to see his team shift more often, the lack of infield adjustment comes down to managerial preference.

While the broad data sets suggest that frequently employing the shift improves a defense, every team must weigh that numerical calculation against intangible factors such as player routines and job satisfaction. If deploying shifts behind him makes a pitcher start hurling F-bombs about it in the clubhouse, maybe that frustration also seeps into his head during the game, causing lapses of concentration, poorly placed fastballs, and three-run bombs at his expense.

That desire to keep things how they were also gets reinforced by selection bias: The plays the shift saves are less obvious than the ball that dribbles through a gaping hole in the infield. “[Managers] will remember the one that goes against them,” Jedlovec said, “instead of the five that work.”

Over the past few years, the Pittsburgh Pirates have been one of the most aggressive shifting clubs in the majors. Part of that stems from a baseball operations staff that’s one of the most analytically oriented in the game, but it’s also a wise move by a team saddled with a bunch of pedestrian infielders; Neil Walker, Jordy Mercer, and Pedro Alvarez aren’t winning Gold Gloves any time soon. According to BIS data, the Pirates have saved 18 runs more than the average team through the use of shifts since Opening Day 2013.

However, other clubs argue that having good defensive infielders negates the need to shift. For instance, only three teams have shifted less frequently this season than the Braves, who employ Andrelton Simmons, the best defensive shortstop since Ozzie Smith. If Simmons is going to get to more balls than anyone else, why bother shifting?

“There might be less room to be gained when you’re good [at catching the ball],” Jedlovec said. “But there’s still some room. So why not take advantage of it?”

The Colorado Rockies are doing just that. Last year, no team shifted less often than the Rockies, as Colorado’s 114 shifts were 87 behind the 29th-ranked Nationals. Consider that the Rox start Gold Glove winners DJ LeMahieu and Nolan Arenado at second and third and slick-fielding Troy Tulowitzki at short, and you have three good reasons not to mess with a good thing. But the arrival of analytically inclined GM Jeff Bridich and a revamped baseball ops staff has prompted the Rockies to shift far more frequently this year: 102 times, the sixth-highest total in the majors. Lo and behold, the five runs Colorado has saved via shifts this season is the most in the majors.2

Despite all of its benefits, the shift isn’t unbeatable. While bunts against the shift are still rare, a handful of players have begun messing around with it. Carlos Pena became so eager to try it, and so good at doing it, that it became reasonable to wonder why more players don’t do it. The same goes for a common question asked by announcers when shifts set up in front of them: Why don’t more players try to hit the ball the other way?

The answer, in both cases, is that it’s really hard. The growth in home run totals during the ’90s, along with the rise in analytical thought, discouraged teams from bunting, and by extension de-emphasized the practice. Ace bunters like Brett Butler are virtually nonexistent in today’s game. As for hitters adept at spraying the ball all over the field, it’s much tougher to do that well than Tony Gwynn and Derek Jeter made it appear. It’s also not the right trade-off for someone like David Ortiz, who can sometimes beat shifts with 450-foot bombs.

However, with run and homer totals dropping over the past few years3 as pitchers throw harder, umpires call low strikes, and teams place a greater emphasis on defense, we could see baseball’s style of play evolve.

Jedlovec said he thinks more hitters will start to bunt and adjust their batting style. “We’re seeing more shifts in the minors now, so that players are prepared for it when they get to the majors. We’re even starting to see it at the college level. Eventually, this will get to guys early enough in their careers so that they become less ingrained in their one approach to hitting. And that’s where it gets fun. We could start seeing some real cat-and-mouse games between hitters and fielders, the kind we haven’t had since the dead ball era.”

First, we’ll need to see teams start shifting more often for that to happen. The Cubs, who sit right around the league median, have shifted less than three times per game in 2015. Within that small subset of plays, shifting is a strategy that might change the outcome of an at-bat something like 3 percent of the time. Drill down that far and you’re not going to see huge changes at the macro level; leaguewide batting average on balls in play has more or less held firm during the five full seasons in which BIS has tracked the rising shift trend. Until the revolution takes hold, the best way to think about shifts is to consider them a way to gain some edge on the competition — a handful of runs over the course of a year.

Still, the upside could be greater than that. The Astros saved 27 runs through the use of shifts last year. Take the standard formula of 10 runs for every one win, and Houston added nearly three victories to its ledger. For all the objections to shifts — selection bias, concerns over players’ psyche, or the occasional numerically based rebuttal — the notion that moving around an infield defense can have roughly the same impact as replacing a generic player with the 2014 version of Albert Pujols4 figures to be something more teams will embrace in the future.

So, sorry, F.P. The smart guys are right, and more shifts are coming.