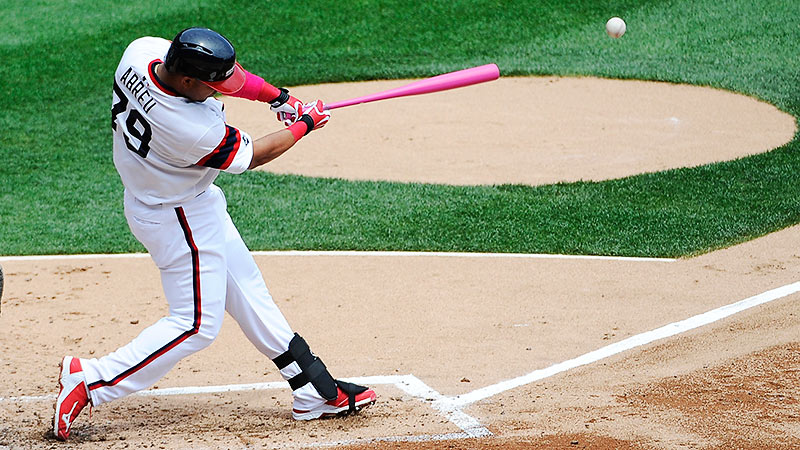 It feels like only yesterday we were enjoying an Opening Day full of walk-off hits, but much like a cheeseburger in the hands of a hungry man, the 2014 season is rapidly disappearing. Instead of fearing that passage of time, though, let’s celebrate it by handing out some fake awards for the season’s first quarter.

Given to the player who’s made the biggest impact.

Tulo will almost certainly not hit .391/.497/.750 all season, but that he’s done so through 39 games is still pretty remarkable. While he doesn’t lead the National League in literally every offensive category, he leads the NL in most of them, which would make him a slam-dunk MVP even if he were a corner outfielder. But in addition to being the most productive hitter west of the Rio Grande, Tulowitzki is also one of the top defensive shortstops in the game. Thanks to his skill set and position, Tulo is one of a handful of players for whom outproducing Mike Trout is a possibility.

It’s a shame we’re not collectively paying more attention to the outstanding seasons Jose Bautista, Chase Utley, and The Mighty Giancarlo Stanton are delivering (plus whatever it is that Charlie Blackmon’s doing), but it’s hard to focus on much else when Tulo is giving us a glimpse of what it would look like to take Barry Bonds’s and Andrelton Simmons’s best attributes and combine them in one guy. There’s a lot of season left, but you have my permission to sucker-punch any contrarian who says someone else is “in the discussion” for MVP at this point.

Given to the baseball figure who drives home from the ballpark listening to “Needle in the Hay” and singing along quietly.

Bo Porter’s 17-second stare would ordinarily make him a shoo-in, but Samardzija is toiling impressively in vain, even by Chicago Cubs standards. The Shark is outpitching his peripherals to a certain extent, but he’s been stupendous, posting the second-lowest ERA in baseball through eight starts, of which the Cubs have lost seven. No one pitching in Wrigley expects to give up nine earned runs in 56 innings and wind up with an 0-3 record.

The End of Toy Story 3 — You Know, the Part Where Andy Gives Away His Toys One by One — Award: Jose Fernandez

Given to the player who possesses the greatest will to hit for power.

There’s only one choice for the Nietzche Award. Abreu was billed as a power threat when he came over from Cuba, but he’s exceeded everyone’s expectations through 42 games. Abreu leads the majors in home runs (15) and total bases (103) and the American League in slugging percentage (.620). He’s got 45 hits on the season: 18 singles and 27 for extra bases. Robin Ventura and the White Sox have to be nervous as hell that someone’s going to find out Abreu is is using an aluminum bat.

Given to the team most beset by death and pestilence.

Let’s see: We found out yesterday that Martin Perez probably needs Tommy John surgery and that Matt Harrison’s ongoing back troubles might affect not just his career, but the quality of the rest of his life. There’s Jurickson Profar’s shoulder injury and Neftali Feliz’s two-year return from his own Tommy John surgery. Derek Holland is out until midseason because he tripped over his dog, an injury I keep bringing up because I live in constant fear of that happening to me. And Rougned Odor is apparently afflicted by space gremlins or something, because in his first week in the majors, he let an easy pop-up drop to ruin Yu Darvish’s perfect game, then lost a ground ball in his shirt.

If something happens to Darvish, I will personally drive to Texas and leave the entire state in a basket on Mexico’s doorstep, because we won’t want it anymore.

Given to the player we most hope is for real.

Until this spring, Dee Gordon was just another guy who’d be a lot better if baseball players were allowed to steal first base. In general, it’s been a good year for such players thus far: Emilio Bonifacio, Rajai Davis, and even Eric Young have hit a little this season, giving us our fill of productive slap-hitting fast guys even as Billy Hamilton and Ben Revere prove to be more disappointing than the son who drops out of college.

Gordon is the class of that group, though.

He put on some weight over the winter, moved from shortstop to second base, and is suddenly hitting .318/.357/.427, with 25 stolen bases in 28 attempts. It’s early enough that a lot of that production could still prove to be a mirage, but extrapolate Gordon’s current stats over a full season, and you’re not too far away from having an MVP candidate. I would love for this to be the real Dee Gordon, because fast slap-hitting guys who steal a base every other game are fun as hell to watch when they’re good, and it’s been too long since someone threatened to steal 100 bags.