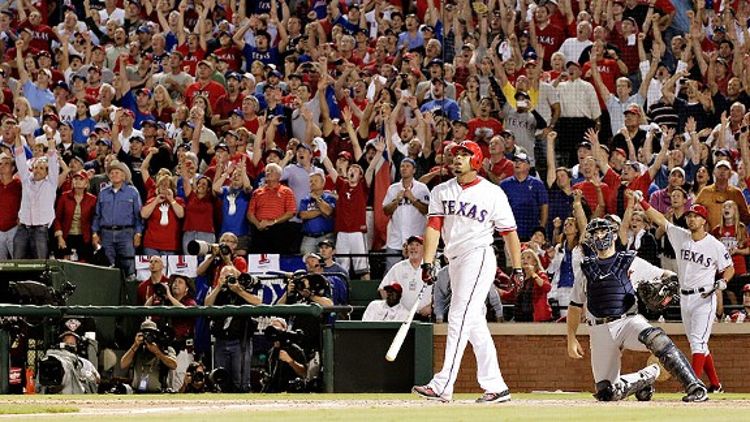 I saw a lot of Texas fans in Rangers Ballpark praying toward the end of the ALCS Game 2 against the Detroit Tigers last night. That’s completely mystifying to me. Why would any Texas fan need prayer when the Rangers have Nelson Cruz?

The only thing miraculous about Cruz’s 11th-inning grand slam space shuttle launch was how inevitable it was. OK, scratch that, it was also miraculous that Jose Valverde’s fastball to the chest (and wrist! Somehow it hit both!) didn’t knock Cruz out of the game and suspend any other life plans he had in the near future. (“Sorry, honey, can’t go to Lowe’s, Papa Grande caved in my chest cavity.”)

I suppose it might have come as a surprise to anyone who had followed Cruz’s underwhelming end to the season; his injury-ridden September and anonymous performance against the Tampa Bay Rays in the ALDS. But it felt like the entire world was revolving around his orbit on Monday, and he seemed entirely comfortable in the position.

I like to think that I have something of a useless extra-sensory perception when it comes to the end of baseball games. Basically, I can tell when extra-inning baseball games are gonna end. I don’t know either, maybe they should make an episode of Fringe about me. I didn’t need my psychic abilities last night, though. Nelson Cruz left very little to chance.

He had already gone yard, tying the game and sending Tigers starter Max Scherzer on his way. Secondly, the Tigers made him angry when Valverde tried to kill him in the ninth (God forgives, Nelson Cruz doesn’t). And third of all, he’s in the zone. “I told you a few days ago, my swing was coming,” Cruz said after his 3-4, 5 RBI, 2 HR performance (nice line, dog). No kidding.

Monday night’s game, despite the 7-3 score, was really about relief pitching and attrition. One of the two teams was going to run out of money arms first. And the team that won the game was going to have the right batter facing the wrong pitcher at the optimal time. I suppose it could have been any of the batters before Cruz in the Rangers’ order.

But after watching replays of his grand slam (the result of an at-bat that looked more like Home Run Derby practice than white-knuckled, playoff baseball) and watching how he looks practically bored by the pre-determined destination of the pitch and how he absolutely TEES OFF on Ryan Perry’s offering, I felt stupid for ever considering it would go down any other way.