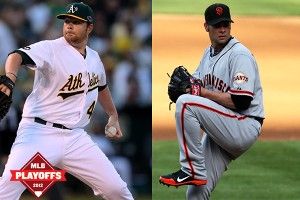 The Cincinnati Reds just suffered one of the worst hard-luck playoff losses any team has experienced in years. Their number-one starter is hurt, won’t pitch later today, and could be out for the rest of the National League playoffs by the time you read this. However, if you’re a Reds fan, you should still feel great about your team’s odds of reaching the next round.

The best player in Tuesday’s 2-1 Giants win was actually Reds starter Homer Bailey. The 26-year-old right-hander went seven innings, allowing one run on one hit, walking one and striking out 10. That his team didn’t win is a tribute to the Giants’ ability to get the most out of some very limited offense, and to put up a bunch of zeroes in their own right.

Bailey is hardly the only pitcher to toss a gem and get nothing for his efforts. Roy Halladay was outstanding in Game 5 of last year’s NLDS, throwing eight innings of one-run ball against a loaded Cardinals lineup, only to have Chris Carpenter best him with a series-clinching, three-hit shutout. Still, that’s mild compared to Bailey’s outing, which saw him throw 5⅔ no-hit innings to start the game and allow that single run without the benefit of the hit. Just how rare was Bailey’s criminal lack of support?

… and Glavine won that last game, shutting out Cleveland 1-0 to win the World Series for the Braves and World Series MVP for himself.

Bailey’s fastball command was exceptional right from the start. Facing Pablo Sandoval in the top of the first, he threw seven straight heaters, weaving inside and out, high and low, starting the at-bat throwing 92-93 and ending it with a 95 mph fastball, the type of something-extra pitch we saw repeatedly from Bailey when he no-hit the Pirates on September 28. This would become a recurring theme. He threw six fastballs in eight pitches to Buster Posey in the second, striking him out with 94 mph cheese down the middle. In the fourth, Posey was the victim again, with Bailey going 94 on the hands for a fouled strike one, a 94 mph fastball that darted across the outside edge, knee-high, for strike two, and another 94 mph offering that Posey swung right through. That whiff launched a stretch of six straight strikeouts for Bailey, who looked as good Tuesday as he did in his no-hitter.

Unfortunately for Bailey, Giants pitchers fared just as well from the second inning on. And thanks to a backbreaking Scott Rolen error in the 10th, San Francisco snuck out with an elimination-denying win.

The play of the game may well have occurred in the first, which was also the only inning in which the Giants allowed a run. Brandon Phillips started the inning with a single. With Zack Cozart up, Phillips broke for second, saw Giants starter Ryan Vogelsong’s pitch skip by Posey, and rounded the bag headed for third. Posey wasn’t quite sprinting full speed at first. But when he reached the ball near the backstop wall, he immediately saw Phillips headed for third and made a decisive throw. It arrived belt-high, in Sandoval’s glove, a beat before Phillips’s leg did. Had Posey’s throw been even a little off target, the entire complexion of the game, and very possibly the outcome, might’ve changed dramatically. Cozart would walk, followed by singles for Ryan Ludwick and Jay Bruce to cash the Reds’ first run. But Phillips’s out meant Scott Rolen strode to the plate with two on and two outs, rather than one out. Rolen worked the count to 3-2, then got rung up by home plate umpire Gerry Davis on a pitch that could generously be described as how-the-hell-could-you-possibly-call-that-a-strike-did-your-LASIK-surgery-involve-actually-removing-both-of-your-eyes?

Both Bailey and Vogelsong, as well as relievers from both teams, benefited from Davis’s generous strike zone. Playing in cold, nighttime conditions also deadened several well-hit balls that might’ve gone for extra bases (and maybe home runs) on a hot, August afternoon. In fact, the Giants allowed just one hit in the final nine innings of the game, with Vogelsong cruising through four innings after that rough first, then exiting for a pinch hitter when Bruce Bochy got aggressive with his trust in the bullpen. The relief corps took it from there, with Jeremy Affeldt and winning pitcher Sergio Romo looking especially impressive in putting up two scoreless innings each.

After Sean Marshall and Aroldis Chapman held the fort for two innings, Jonathan Broxton opened the 10th by ceding singles to Posey and Hunter Pence. The Praying Mantis gets a lot of good-natured grief on the Internets for … well, all of this. But he’s a still a good player (albeit one having a down year), capable of doing big things. Like make running, sliding catches and fight through some nasty leg cramps to deliver the 10th-inning hit that helped set up the Giants’ winning run. That run scored on an error by Scott Rolen, which raises the second-biggest question of Game 4: Should the Reds bench Rolen for Todd Frazier? A Hall of Fame–caliber defender throughout his career, Rolen is responsible for the only two errors of the series by either team, the second on a Joaquin Arias chopper that cashed Posey to win the game for San Francisco. Todd Frazier’s likely a better hitter at this stage of the two players’ careers, and the 37-year-old Rolen might not be an optimal choice regardless in a day game after a night game this late in the year.

Whichever of those two players get the nod at third, the Reds will have a golden opportunity to pick up their offense and close out the series today when they face Barry Zito. The veteran lefty’s 15-8 record this year is swell, but it also belies Zito’s continually crappy peripherals and his inability to miss bats, which could hurt him badly against the potent middle of Cincinnati’s lineup. Meanwhile, the Reds will choose between Mat Latos and Mike Leake with Cueto hurt. Latos would seem the logical choice. After a rough April, Latos dominated the rest of the season, posting a 3-to-1 strikeout-to-walk ratio, a 3.09 ERA, an opponents’ batting average of .217, and on-base percentage of .279. He’d be going on three days rest, but after throwing just four innings and 57 pitches in relief of Cueto in Game 1, allowing just one run on four hits in the process. The Giants have scored just four runs all series (vs. 15 for the Reds), with the top three hitters in the order going 4 for 37 and looking like they badly miss Melky Cabrera and his league-leading batting average. The Reds will have a fresher bullpen to boot, with the status of Affeldt and Romo in doubt after multiple-inning outings for both Tuesday. A potential Game 5 would pit Giants ace Matt Cain against Latos or Leake on full rest, or Bronson Arroyo on short rest; the time is now for the Reds to close out the series.

Brett Anderson last pitched on September 19, the day he injured his oblique and knocked himself out for the rest of the regular season. The A’s put the lefty on the ALDS roster anyway, trusting his track record (every other Oakland starter in this series is a rookie) and his health against what might be the best hitting duo in baseball. The result was a 2-0 Oakland win, highlighted by Anderson’s lights-out performance.

Anderson fired six shutout innings at Detroit, striking out six, walking none, and giving up just two hits. You wouldn’t have expected that outcome, given Anderson threw first-pitch strikes to just eight of the 21 batters he faced on the night. Credit Anderson’s ability to mix pitches and stupefy Tigers hitters. Already rolling as he entered the sixth, Anderson faced a challenge in what would surely be his final inning no matter the outcome. But after retiring Austin Jackson, Anderson made both Omar Infante and, yes, even the mighty Miguel Cabrera look awful. After getting two strikes on Jackson, Anderson fired a cartoonish 83 mph slider, a big breaker that started high and outside and dropped all the way out of the strike zone, below the knees and off the inside corner. He went down and in to Cabrera, too, fanning the league’s best hitter on another unhittable, down-and-in slider.

Anderson and the A’s bullpen got huge help from their defense, usually at Prince Fielder’s expense. The Tigers slugger led off the second with a deep shot to center that looked like it would clear the wall … only Coco Crisp swooped in to make a circus catch, robbing a home run. That marked the third time Fielder had been robbed of a homer this year, the most for any hitter. In the seventh, Fielder lined a shot to left … only Yoenis Cespedes sprinted in and made a tumbling, out-of-nowhere catch. The Tigers put a man on in the ninth … only for Fielder to bounce into a game-ending double play.

While the game could have easily turned out differently if not for Oakland’s stellar defense, you still have to wonder when Detroit’s offense will show up. The Tigers have had just one run score this series on a hit — a solo home run by Alex Avila. Of the Tigers’ seven runs scored this series that didn’t come on Avila’s homer, three came via error, one on a Don Kelly sacrifice fly, the rest on groundouts. Granted, three games tell us virtually nothing about a team’s offense. But the Tigers finished a mediocre sixth in runs scored among AL teams, with several hitters putting up replacement-level results behind the big three of Cabrera, Fielder, and Jackson. It’s probably not a good sign when 21-year-old Avisail Garcia, he of the 47 lifetime major league at-bats, has started two of the Tigers’ three games so far this series.

The good news for Detroit is a 2-1 series lead, and a chance to pull a Brett Anderson of their own in Game 4. Tigers right-hander Max Scherzer was unhittable in stretches this year, leading the league in strikeout rate. But he also struggled with multiple injuries down the stretch, lasting just two innings against the A’s on September 18 due to shoulder fatigue, losing to the Twins in his next outing and then missing a start with that shoulder ailment, then hurting his ankle while celebrating the Tigers’ division title win on October 1. Jim Leyland says Scherzer’s at 100 percent, though the smart money’s on Scherzer coming out before hitting 100 pitches, with an Anderson-like six innings a potential best-case scenario.