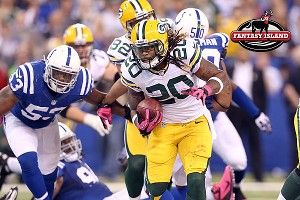 DISCLAIMER: This column makes big assumptions and expresses strong opinions. Please understand: I do not speak for all the women in the world. Just every woman I know.

As many of you have correctly guessed, I spend just as much time reading gossip rags as I do watching football (OK, fine, it was exponentially more until recently). Having said that, I’m a genuine football fan, and these days, having washed up here on Fantasy Island, I am necessarily required to be equally immersed in football and pop culture. And so every Monday morning, it is both delightful and a total insult when THIS shows up on E! Online’s “Top Stories” (and THIS the week before, and THIS the week before that). Some quick research shows that Comcast — providers of the NFL RedZone package that competes with DirecTV — owns the E! Entertainment network. And there, my friends, is the product I’m supposed to approve in the household budget after I read E! Online’s weekly recaps.

The NFL execs are no dummies (except Goodell). They clearly understand how close they are to doubling their fan base if they can lure women into the tent. They know how much more cash is in play if they turn the ball-busting wives into the same drooling, glassy-eyed robots the husbands are. They offered us nothing but baby clothes for a long time, but they’ve since evolved. Their NFLshop.com product line includes pink hats, jerseys, and baby tees. They celebrate boobies by wearing hot-pink socks a month out of the season. They rent the charming little Manning boys out to me 30 seconds at a time.

Understanding this, I spend my time reading these E! columns alternately giggling and being outraged over what E!/Comcast thinks I care about in the NFL. This week it’s Chuckstrong and Tim Tebow. Last week it was Dez Bryant’s bad behavior and Tim Tebow. The week before it was Torrey Smith’s inspiring performance just hours after his younger brother’s death … and Tim Tebow. A summary: They think I care about all the Lifetime-movie story lines and he who shall not be named.

Two thoughts for E!, Comcast, and the NFL:

1. There must be a ton of focus grouping that proves me wrong on this or else they wouldn’t go there SO HARD, but man, Tebow is a massive turnoff for most of the women I know unless he’s shirtless, silent, and absent the Amish beard.
2. Far more important: When you do a Google image search for “shirtless NFL players 2012,” Tebow is a runaway no. 1. No. 2 is Chris Kluwe. Terrell Owens is third. Huh? WHO WILL FIX THIS?

So here’s what the NFL should take away from this nugget: PUT MORE SHIRTLESS PLAYERS ON THE INTERNET, PLEASE. You’re looking at Magic Mike–level money if you do. No Mannings. They’re right where they ought to be in the self-deprecating shill niche.

DISCLAIMER: Did you read what I just wrote? Why are you looking for fantasy football advice from me? Turn back! TURN BACK!! Or read on at your own risk.

Rueben Randle is a very talented receiver on an extremely volatile depth chart. Is he a Week 6 play, though? TOUGH CALL. The Giants keep injuring receivers and then pulling amazing new receivers out of their hats. Each one of them is just as good as the other, although none of them are quite as good as Victor Cruz. Even Hakeem Nicks might have to fight his way back to preferred status if he’s back in the lineup this week. Any Giants receiver is a great bet, though, as Coughlin and Manning will likely try to stretch the field early against the fearsome San Francisco defense next week. If that’s not working, they can fall back on Ahmad Bradshaw and David Wilson, who may be emerging as the RB2.

Cedric Benson’s attitude was optimistic after an injury during the Colts game. His foot, however, was in a boot, and now we know he’ll be out for eight weeks. Alex Green should be a usable replacement.

Josh Gordon is a realistic bye week replacement for one of your better receivers against a fairly weak Bengals passing defense.

With Danny Amendola out, Brandon Gibson is, like it or not, the no. 1 option in St. Louis.