Oakland A’s on the Verge of a Non-Hollywood Ending 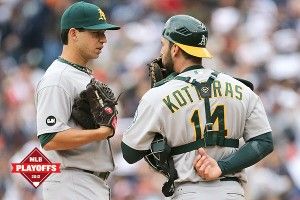 So this is what it’s come to? Three must-wins in a row? On June 21, I wrote on Grantland that the A’s were “a long shot to make the playoffs this season, to put it generously,” which feels a little silly now. But Baseball Prospectus, earlier that same June week, was pegging the A’s chances of making the playoffs at less than 1 percent. After a madcap season of clutch rookies and walk-off wins, the team somehow stole the AL West. But after that Olympian saga captured everyone’s attention, a tough weekend of two close losses suddenly leaves Oakland on the brink of another heartbreaking exit. It doesn’t seem right.

While I was working on that June piece, a team source asked me, rather poignantly, why I was interested in writing a feature about his ballclub. No simple explanation presented itself. The crowds were thin, the team payroll was less than two A-Rods, and the lineup could not hit. But they were young and they played sub-.500 ball with a certain élan. I found them entertaining, basically.

I had no idea how entertaining they would become. In July, the team went 19-5. Which obviously could not last. Except they won 18 games in August and 17 in September. The pitching staff was hampered by injuries, including a life-threatening blow to Brandon McCarthy and a drug suspension for Bartolo Colon (he turned out to be a little too “bionic man”), and it was jammed full of inexperienced players; the 25-and-under club of starters (Jarrod Parker, Tommy Milone, A.J. Griffin) and relievers (Ryan Cook, Sean Doolittle) always seemed on the verge of veering back toward Earth at high speed. So did the Cuban newcomer Yoenis Cespedes and spare part Brandon Moss, who decided to show up midyear in his Babe Ruth costume, knocking it into the upper deck on a regular basis. I began to skip my eye over A’s beat writer Susan Slusser’s tweets in my feed out of fear. Surely the team I’d grown fond of — am I allowed to say that? — would suddenly realize they weren’t that good.

When October arrived and the A’s faced a season-ending series against their Goliath, the Texas Rangers (payroll advantage about $121 million to $53 million), Oakland had not yet sealed a playoff spot and the fans still wondered if all would be lost. But when the series was over, the A’s had improbably swept Texas with the division title at stake, coming back from five games out with nine to play. As Slusser noted, they became the third team in history to win a division or pennant by spending exactly one day alone in first place: the final day.

Back in December, Billy Beane explained in the wake of the winter meetings why he was once again selling off top players rather than buying them: “There wasn’t going be a move we could make to compete with Texas and Anaheim.” Well what do you know, Billy, your boys done beat ’em both.

And then this happens.

When the league decided to add a second wild-card slot, they also adopted a Division Series schedule in which the higher seed opens the five-game series with two games on the road. Not to put too fine a point on it, but this is incredibly stupid. The complaints would be echoing nationwide if the Orioles had opened with two wins at Camden Yards and the Yankees were now the ones with their backs against the wall. As it happens, only the hard-luck A’s illustrate the serious problems with this system.

The A’s finished — can this be true? — 26 games over .500. The Detroit Tigers finished 14 games over. For that solid whupping over a 162-game sample size, Oakland’s reward was flying to Detroit to face Justin Verlander in the cold, with the Tigers enjoying a loud crowd and last licks. Game 2 was played the following day at 9 a.m. Pacific — a real treat for the A’s and the Bay Area faithful. Detroit won both games.

The league clearly sees the problem, because the plan is to return next season to the two-two-one scheme, in which the team that earned the higher seed, logically enough, gets the clear advantage in both three- and five-game series. It’s just that this year there wasn’t room to add a travel day in a schedule that had already been set. But why wouldn’t the league simply delay instituting a second wild card until next season? Because of television revenue. Because of greed.

Now of course, not all can be blamed on Bud Selig (though he happens to also be pissing off the A’s by holding up plans for a new stadium). Oakland could easily have split the two games in Detroit, and they didn’t get it done.

In Game 1, 23-year-old Jarrod Parker — who looks about 18, with a tuft of upward hair at the front of his military cut — pitched superbly for Oakland, giving up two earned runs in 6⅓ innings. The frightening duo of Miguel Cabrera and Prince Fielder went 0-for-7. But bad luck and miscues in the infield proved costly, as did a home run from the Tigers’ no. 8 hitter, Alex Avila. Another way of looking at it is that Verlander just beat the A’s straight up. Not much shame in that.

Game 2 was different. If the A’s get eliminated today, this series could well be remembered in Oakland as the Coco Crisp one. With a one-run lead in the seventh, Crisp faced a weak liner to center from Cabrera that should have shut down the inning. A world of highs and lows occurred in the ensuing five seconds. He misjudged the ball at first, then recovered beautifully with his great speed, only to bounce the ball off the heel of his glove. As he reached out to make a second stab at it and even a third, you could feel how his stomach must have dropped as it slipped away. Two runs scored, and the crowd went nuts.

But the A’s showed their customary pluck in the following inning, as Cespedes stole both second and third (with a left-handed batter in the box) and scored on a wild pitch to tie it. Moments later, Josh Reddick, who was 0-for-6 with six strikeouts on the series, laced one over the wall. Another lead for the A’s, and Crisp seemed off the hook. But they didn’t hold on. The intimidating relief tandem of Ryan Cook and Grant Balfour looked intimidated themselves. It was Detroit’s turn to crown an improbable hero, sub-Mendoza Don Kelly, who came through with the walk-off sacrifice fly in the ninth.

In Division Series history, teams that go up 2-0 have won 38 out of 42. If the A’s are going to pull another dream comeback, they will once again need to rely on the kids to do it. Brett Anderson returns from injury to start tonight, and A.J. Griffin is the Game 4 starter. Both are 24. Should Game 5 be necessary, their younger teammate Parker may be trotting out to the mound, with everything on the line. Verlander lies in wait.

The players have been mouthing their lines about not being worried. According to Jonny Gomes, something of a clubhouse elder statesman at 31, the youngsters might just be telling the truth. “These guys don’t really have panic in their vocabulary,” he said Monday. “Me, as the veteran, I’ve probably panicked the most.”

Evan Hughes (@evanhughes) has written for New York Magazine, the New York Times, the New York Review of Books, and The Awl, among other publications. He is the author of Literary Brooklyn.