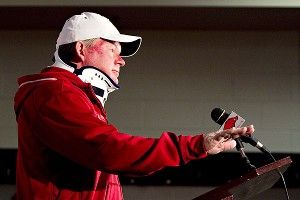 While watching Arkansas’s John L. Smith flick his tongue in and out of his mouth during his win over Auburn on Saturday — victory is more savory than bankruptcy — I had a thought. It inevitably falls into the contrarian/trollish category, so forgive me. Here’s the thought: Why can’t Arkansas and Bobby Petrino get back together? Why exactly is that marriage unsalvageable?

I think the argument breaks down into two parts:

1. Bobby Petrino is a liar and an asshole. (We pretty much all agree on this.)

2. College football is a morally pure place that can’t accommodate liars and assholes. (Here’s where we may differ.)

Let’s begin with no. 1. I re-watched Petrino’s interview with ESPN’s Joe Schad this morning. What stood out was the sheer number of sex-scandal clichés Petrino managed to utter.

Petrino: “[I’m] trying to put my finger on the why.” A common diversion for someone caught in a sex scandal. They’d like to distract attention from the who, the when, etc.

Petrino: “I played it over in my head a million times. How could I do this? How could this happen?” Another way of saying this would be: How could I get caught?

Petrino: “I’m going to keep my life in better balance.” Translation: I deeply hurt my wife, wrecked a second would-be marriage, and annihilated a top-10 football program all because I worked too hard. Have we heard this excuse before? Yes, we have.

Petrino: “I really feel like I’ll be a better coach because this happened.”

And … I’ve almost talked myself out of the idea of Arkansas forgiving Petrino. But let’s press on. Why can’t Petrino coach the Razorbacks again? He had an embarrassing sex scandal. Well, lots of people in important jobs have sex scandals. Often, these scandals come out in the newspapers. I suspect few of us would say that mere sex — provided it was lawful, consensual, etc. — disqualifies Petrino from being a college football coach.

It wasn’t the sex, you heard back in April, it was the lying. Petrino lied to his boss, AD Jeff Long, even after he gave a press conference in that ridiculous neck brace. I don’t quite think this is a disqualifier, either. Not to keep flashing back to politics, but “it’s the lying” was something you heard a lot during the Clinton impeachment. We come out against lying, rather than the sex it hides, because it’s a cleaner and easier argument. But, really, if you have a problem with Petrino, it’s probably with the sex. That he would clumsily cover it up is a second-order concern.

Maybe Petrino’s lying is killer because he also lied in an administrative way. He ignored qualified candidates for a player-development job to get Jessica Dorrell onto the payroll. I think this behavior is pretty reprehensible. We should note, however, that not long ago another D-I coach told a reporter he’d fired a staffer. In fact, he hadn’t fired anybody; he was merely using his staffer as a prop in a national magazine story to prove his toughness. This liar is now the coach of the USC Trojans.

OK, maybe I’m being too lawyerly here. Maybe Bobby Petrino can’t coach Arky because it would be virtually impossible to do the job. Take recruiting, for example. Petrino needs to tell moms and dads he’s going to raise their sons in a morally cozy, “family” environment. It’s pretty tough to convince Mom and Dad when you can’t even convince your own wife and kids.

This is probably the best argument against rehiring Petrino. But let’s look at that recruiting pitch again. Every college coach who walks into a recruit’s home is saying, “I’d like your son to play a potentially health-destroying sport for free. I can cut your son at will. I can make it difficult for him to change schools. Hell, I may even be offering him a scholarship that I’ll withdraw at an inconvenient date.”

Now, why does “I crashed a motorcycle with my mistress on the back” push things into immoral territory?

The point is not that Petrino is an OK guy. It’s that college football has festered for so long that even Petrino’s awfulness seems pedestrian. For instance, if a coach had worked out his players longer than the NCAA’s maximum number of hours, that would seem to disqualify him from future jobs. But said coach got a new job at the University of Arizona. If a coach played three-card monte with scholarship offers — offers, it bears repeating, that are to play for free — you might figure they shouldn’t coach at Alabama or LSU or Ole Miss. (An incomplete list — insert your favorite over-signer here.) But they have and they do.

I really dislike Bobby Petrino. I hope I don’t conduct my life the way he has. But I’m not sure college football deserves to feel that morally superior to him. Here’s what’s going to happen: Petrino will get a job at another school, give one semi-humble press conference, and then get back to being the celebrated asshole who grooms Tyler Wilsons and Cobi Hamiltons. For taking a moral stand another school won’t, Arkansas will continue to disintegrate. The depressing conclusion is: Free Bobby.

BQBL: The Blow-by-Blow Triumph of Yo Gabba Gabbert