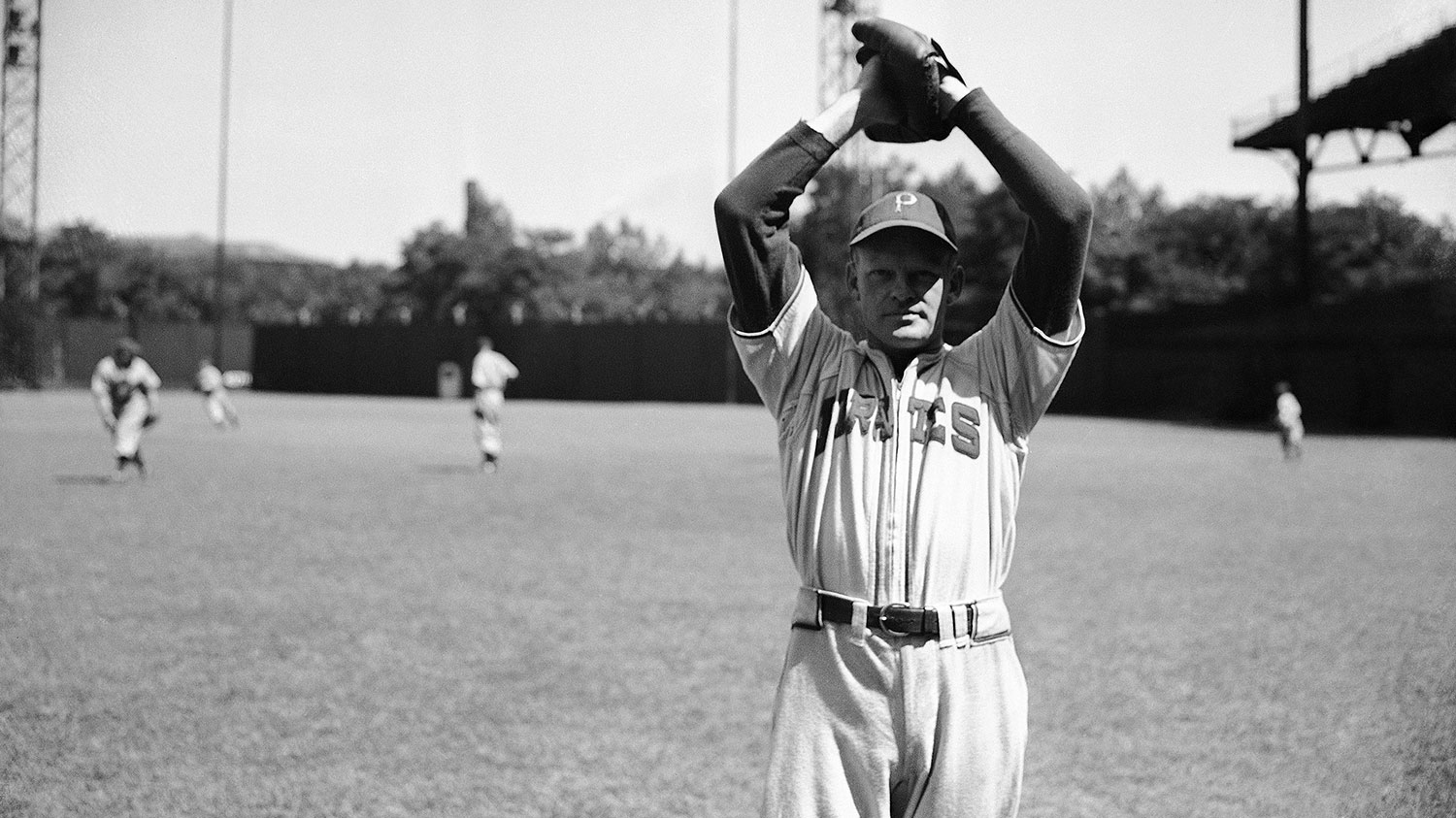 If you ever want to watch 45 seconds of baseball magic, I direct you to this 1981 This Week in Baseball feature on Yankees relief pitcher Dave LaRoche. In the clip, LaRoche describes an at-bat against Brewers slugger Gorman Thomas: “Bob Lemon had just become the manager,” the veteran left-hander says. “He wanted to know if I wanted to put Gorman on, or what we wanted to do. And I said, ‘Well, how about if I just throw him my curveball?’”

Lemon had never seen LaRoche’s curveball in action. The skipper, and the 27,337 spectators at Yankee Stadium, was in for a treat. LaRoche’s curve was in fact a big ol’ blooper pitch. Unaccustomed to facing the pitch, Thomas swung hard, hitting a line-drive foul down the third-base line. Then came another one, this time ending with Thomas bunting the pitch foul. LaRoche tried to finish him with a fastball to the outside corner, but missed.

Then came another lob: A sloooow, high-arcing offering that went a good 15 feet in the air. To Thomas, the pitch had to look like a 24-ounce porterhouse, fat, juicy, and ready to be devoured. But to LaRoche, the pitch was a weapon, a tantalizer that could make a batter swing from his heels and come up with nothing but air. This was no ordinary curveball. This was “LaLob.”

Thomas had never seen anything like LaLob, and like many first-timers, he got eaten alive by it. LaRoche was a highly effective reliever for most of his career, and LaLob was his signature pitch, an offering that delighted fans and also made his fastball look like it was traveling 117 mph. Yet despite the success enjoyed by LaRoche and other devotees of the pitch, it’s become a dying art, a rarity that’s now even rarer.

So what happened to LaLob, or as most of the baseball world calls it today, the eephus pitch? To find an answer, let’s start by going back to the turn of the 20th century.

According to baseball lore and the work of dogged historians John Thorn and John Holway, the first pitcher to throw a big blooper pitch was Bill Phillips, who played in the National League on and off from 1890 through 1903. The practice then lay dormant for nearly 40 years.

That’s when Rip Sewell, a right-hander for the Pirates, resurrected it. Sewell had struggled during the 1941 season, then saw his career thrust into jeopardy when a hunting companion accidentally fired 14 pellets of buckshot into him. The damage done to his right foot required him to learn a new delivery and a new pitch to make up for his diminished fastball and curve.

Sewell gripped his new baby with three fingers. He’d throw it sky-high, sometimes as far up as 25 feet, bearing down on the hitter with loads of backspin. And while velocity measurement was a primitive science back then, the pitch was said to max out at around 50 mph.

The first time Sewell’s manager Frankie Frisch saw the pitch, he was stupefied. What the hell was that thing? he asked after seeing Sewell lob the pitch by flabbergasted Tigers outfielder Dick Wakefield. Maurice Van Robays, Sewell’s teammate, wasn’t impressed. “Eephus ain’t nothing,” Van Robays said, “and that’s a nothing pitch.” No one was quite sure what “eephus” meant, though one long-standing theory holds that Van Robays was summoning “efes,” the Hebrew word for zero. Whatever the damn thing was, for Sewell it was an equalizer, a pitch he would ride for eight more seasons in the big leagues, two of those netting him more than 20 wins.

In baseball, as in life, imitation is the sincerest form of flattery. Sewell’s eephus-fueled career revival didn’t necessarily flood the league with blooper experts, but at least this time we didn’t have to wait 40 years for homage-payers to emerge.

Steve Hamilton, a tall, lanky, lefty sidearm reliever in the ’60s and early ’70s, became one of the most prolific eephus tossers of his era. While some pitchers might use a bit of deception before unleashing a big floater, Hamilton didn’t bother with any subterfuge. He’d wind up, then come to a virtual stop, flipping the ball toward the heavens and watching its ascent. Like Sewell’s eephus, Hamilton’s would routinely climb 20 or 25 feet before dropping down toward his catcher’s glove. His offering became known as the “Folly Floater,” and it made Yankees fans and their high-energy play-by-play man, Phil Rizzuto, swoon.

In the years that followed, a smattering of other pitchers deployed eephus pitches. Pascual Perez, the 162-pound bundle of twitchy lunacy, threw a version simply known as the “Pascual Pitch” — “l’arc-en-ciel” (“the rainbow”) for French-speaking Expos fans smitten by their Jheri-curled hero. Kaz Tadano also threw a true skyscraper, though all that got him was a modest two-year big league career after many years in Japan.

But as the years wore on, true eephus pitches went the way of the dodo. Well-traveled lefty Casey Fossum threw an ultra-slow pitch that became known as the “Fossum Flip,” but it wasn’t thrown nearly high enough to be a true eephus. Vicente Padilla’s “Soap Bubble”? These deliveries by Paul Maholm, Carlos Villanueva, and Henderson Alvarez? None of them count as eephus pitches — not when they’re barely reaching the batter’s eye level, let alone launching anywhere close to 20 feet in the air.

Rob Neyer collaborated with Bill James on The Neyer/James Guide to Pitchers, which profiled countless stars, scrubs, and just about every pitch type known to man. As a dedicated baseball historian, Neyer laments the disappearance of the eephus, chalking it up to the game becoming far more conservative.

“That pitch is one of the casualties of professionalism, along with leaving your gloves on the field and field events before games,” Neyer said. “These days, nobody really wants to put on a show or look a little foolish.”

The height of the pitch aside, throwing anything slower than, say, 60 mph looks horribly out of place at a time when a typical bullpen might trot out three or four relievers who can gun pitches into the high 90s. Burke Badenhop knows that all too well. The eight-year veteran (and Grantland contributor) is a soft-tossing ground-ball specialist whose fastball barely edges above 90 mph, making him something of an anachronism. Being the teammate of impossibly hard-throwing left-hander Aroldis Chapman only drives the point home.

“Velo is just the name of the game,” Badenhop said. “Throw harder and throw things that are sharper. Slow equals bad to most people. So they never even think slower is an option. Not many guys even throw curveballs nowadays.”

Badenhop said a more likely scenario for future hitter deception could involve different deliveries, rather than Sewell mimic jobs. Pitchers like his teammate Johnny Cueto will sometimes quick-pitch against batters who might’ve let down their guard for a second. Another Reds teammate, rookie Raisel Iglesias, will suddenly drop down to change a hitter’s line of sight, even though he’s not a true, full-time sidearmer. In the always evolving battle against dangerous hitters, these are worthy and effective efforts, but still not enough to make Rizzuto’s successors yelp with delight.

Even if they’re not quite ready to go full eephus, though, a handful of pitchers aren’t giving up the slow lane without a fight. According to Dan Brooks of Brooks Baseball, these are the 10 most prolific slow-curveball seasons since PITCHf/x data became widely available in 2008:

With Livan Hernandez retired, Yu Darvish is the undisputed king of the craft — no surprise for a pitcher who can touch the mid-90s but also throws no fewer than eight different pitches, with multiple variations on many of them.

With the exception of Kevin Correia and his average slow curve of 76 mph, Darvish and all the others above have thrown pitches that have ducked under 60 mph. However, the king of sloth-like velocity in the PITCHf/x era is Randy Wolf. A 15-year veteran who last pitched in 2014 for the Marlins, Wolf set the slow-ball standard for the Brewers in 2012. Facing Reds second baseman Brandon Phillips, the crafty lefty rocked back and uncorked an impossibly slow pitch, clocking in at just 49 mph.

Beyond slow curves, you’ll occasionally find pitchers who throw slow, looping pitches that act more like extreme changeups. R.J. Anderson of Baseball Prospectus recently profiled Tigers starter Alfredo Simon, the most frequent practitioner of the ultra-slow change. Facing veteran Torii Hunter on May 12, Simon started the at-bat with a changeup that registered 61 mph. Hunter flinched, then flashed a big smile. Two pitches later, he was no longer smiling, as a second change, this one at 63, induced an inning-ending popout.

As rare as it is for hitters to swing at slow pitches, a few have been ultra-aggressive against them. According to Brooks Baseball, these are the 10 most aggressive slow-pitch swingers since 2008:1

Herein lies the danger with the slowball. There are few better ways to look foolish than to throw what many regard as a gimmick pitch and watch it get crushed into the bleachers. Throwing any pitch 20 to 30 mph slower than your usual repertoire is tough to do. Sticking that pitch in the strike zone, and out of the reach of aggressive hitters, is tougher still.

Just ask Bill Lee what happened when he tried to fool Tony Perez with his “spaceball” pitch in the 1975 World Series:

Or ask Orlando Hernandez about that time he tried to sneak not one but two ludicrously slow curveballs by Alex Rodriguez when A-Rod was in his home run prime in Texas.

If Sewell were still with us, he’d have his own horror story to tell. Riding his freak pitch to three All-Star appearances, Sewell allowed just one home run off the eephus in his entire career. That came in his final All-Star berth in 1946. Sewell’s National League team trailed the American League 9-0 when Ted Williams stepped up to bat with two runners on in the eighth. “You’re not going to throw me that damn pitch of yours, are you?” Williams shouted to Sewell. “I might!” Sewell yelled back. He did throw it on the first pitch, and Williams swung right through it, losing his balance and looking flustered for once in his near-impeccable career. Sewell threw a second eephus, and Williams fouled it off. Now the Boston crowd was standing and cheering. The game was out of hand, and the opportunity to strike out the greatest hitter on earth with a flying-saucer pitch loomed. “Here it comes again!” Sewell said.

Williams launched the pitch into the right-field bullpen. He laughed all the way around the bases.

Sadly, today’s game has grown too uptight for that kind of high jinks. Under the guise of Bud Selig’s “This time it counts,” pitchers can’t even be suspected of having a stitch of fun during the All-Star Game, lest controversy erupt. And if it’s a regular-season or playoff game that truly does count, the embarrassment and second-guessing that would accompany a 20-foot-high pitch walloped 450 feet is enough to dissuade today’s pitchers from turning to the eephus.

So for now, we’ll have to settle for the next best thing: the slow-slower-slowest curveball enthusiasts who remind us of the great eephus throwers of the past, even if they don’t quite kiss the sky like their forebears used to. When the new generation’s own blooper pitches are working, the rewards can still be bountiful. And when the victim is the son of LaLob’s creator, the callback to baseball history grows even sweeter.