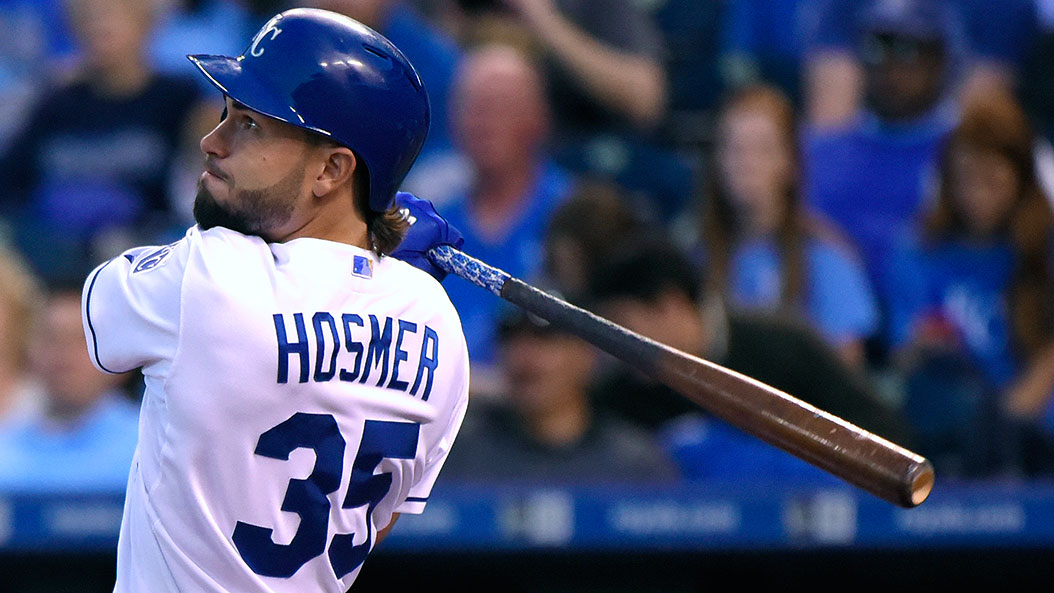 Up until last summer, it seemed like Charles Schulz was writing the script for Eric Hosmer’s career. Following Hosmer’s progress was like watching Charlie Brown run toward Lucy while she was holding a football: The potential for greatness was there, but the end result was always disappointment.

The third pick in the 2008 draft, Hosmer was praised for his advanced hitting approach and considered a strong candidate to hit for average and power in the big leagues. After struggling in his first full minor league season — he went pro out of high school — Hosmer went nuts in 2010, batting .338/.406/.571 with 72 extra-base hits in 137 games across Class A and Double-A. Heading into 2011, Baseball America tabbed Hosmer as the eighth-best prospect in the game, and a blistering .439/.525/.582 line in his first 26 games at Triple-A Omaha earned him a call to The Show. His rookie season didn’t disappoint, as the then-21-year-old posted a .293/.334/.465 line, which was 13 percent better than league average.

Aside from the impressive final line, what got people really excited was how Hosmer finished the season. He hit .313/.349/.493 after the All-Star break, including an amazing September consisting of a .349 average, five homers, and seven doubles. That second-half kick made it seem like the Royals had found a much-needed middle-of-the-order run producer.

Then the frustration began. Hosmer’s numbers tumbled to .232/.304/.359 in 2012. You could blame a lot of that on a (mostly luck-induced) 59-point drop in his batting average on balls in play, but that was still cold comfort for Royals fans hoping for big results. It looked like more than just bad luck once Hosmer started his 2013 season with similarly ugly results — one homer through the first two months. Then he rallied to hit .318 with 16 homers over the final four months, suggesting again that a breakout might be coming. Except he laid another egg over the first half of last season, batting a measly .246/.288/.343 through the end of June.

So what the hell do we make of everything that’s happened since?

Over the final three months of the 2014 regular season, Hosmer blazed to a .321/.379/.509 finish. You could dismiss that as a span of just 44 starts because of an injury that cost him a month, or as another BABIP-inflated stretch: .372, with a modest five homers in 182 plate appearances. But then came that run of playoff glory.

First there was the Royals’ stirring comeback against the A’s in the wild-card game, in which Hosmer went 3-for-4 with two walks. Then he obliterated the Angels, going 4-for-10 and slugging 1.100 while making quick work of the ALDS challengers. The power ebbed during the ALCS, but Hosmer still hit .400 for a second straight series as the Royals dispatched the Orioles. His final line for the postseason was enough to knock you over: .351/.439/.544 in your scorebook and a blitzkrieg of crushed line drives in your memory.

Six months later, we’re 35 games and 157 plate appearances into Hosmer’s 2015 season, and he’s still roping line drives all over the park. K.C.’s first baseman is batting .333/.404/.580 this year. He ranks among the league leaders and is on pace to set career highs in batting average, on-base percentage, slugging, home runs, and Wins Above Replacement. Add up everything that’s happened from July 1 until now — including that playoff magic — and you get this: .331/.398/.542 in 405 at-bats, roughly two-thirds of a season.

Considering his past history of sudden crashes back to earth, we have to ask: Will it last? And what, if anything, has changed for Hosmer?

It seems to start with patience at the plate. This year, Hosmer has walked in 10.2 percent of his plate appearances, a career high and well above his 7.5 percent career number. During last year’s playoffs, his walk percentage surged to 13.6.

So, Hosmer’s probably been a bit more patient this year than in the past, but it’s also easier to take a more measured approach when pitchers aren’t throwing you strikes. And opposing staffs have good reason to pitch Hosmer more carefully. In scientific terms, he’s raking.

Challenge him with a fastball or challenge him at all in a two-strike count, and you’ll end up like the Rangers’ Sam Freeman did Thursday. With two outs and two strikes in the sixth inning and a runner on second, Texas catcher Carlos Corporan set his target four or five inches off the plate. The lefty Freeman fired a 94 mph fastball near the outside edge of the plate but still in the strike zone, well off Corporan’s target. Hosmer belted the pitch 427 feet, just a little left of dead center. It was Hosmer’s fourth home run of 425-plus feet this year, tied for most in the majors.

More broadly, Hosmer is hitting the ball harder and killing worms less often than ever before: His ground ball rate sits at 46.8 percent, and he’s on pace to hit into fewer double plays than in any previous season. Meanwhile, he’s been a line-drive machine, whacking liners at a career-high rate of 26.1 percent.3 Not coincidentally, he’s hitting the ball harder than he has in three years,4 and he’s pulling the ball more than ever before (38.5 percent of the time).

Even though Hosmer is tearing the cover off the ball and pitchers are scared to pitch to him, we still can’t quite assume he’s turned the corner for good and become the perennial All-Star everyone expected when the Royals drafted him seven years ago. For one thing, he’s homered on 23.3 percent of the fly balls he’s hit this year. While a stronger, more experienced, more disciplined hitter would be expected to convert more fly balls into homers, that figure is so far above Hosmer’s career average of 11.8 percent5 that we should probably expect some pullback there.

Still, given all the progress in Hosmer’s skill set, you can start to get at least a little excited. He’s 25 years old, with more than 2,500 major league plate appearances under his belt, thrusting him into a sweet spot on the development curve where players are more likely to break out. Scouts have long predicted big things for the Kansas City first baseman, and few hitters on earth own a sweeter swing.

If the Royals are going to make a deep playoff run for the second straight year, Hosmer will probably play a major part in making that happen. Don’t bet against the player — or the team.