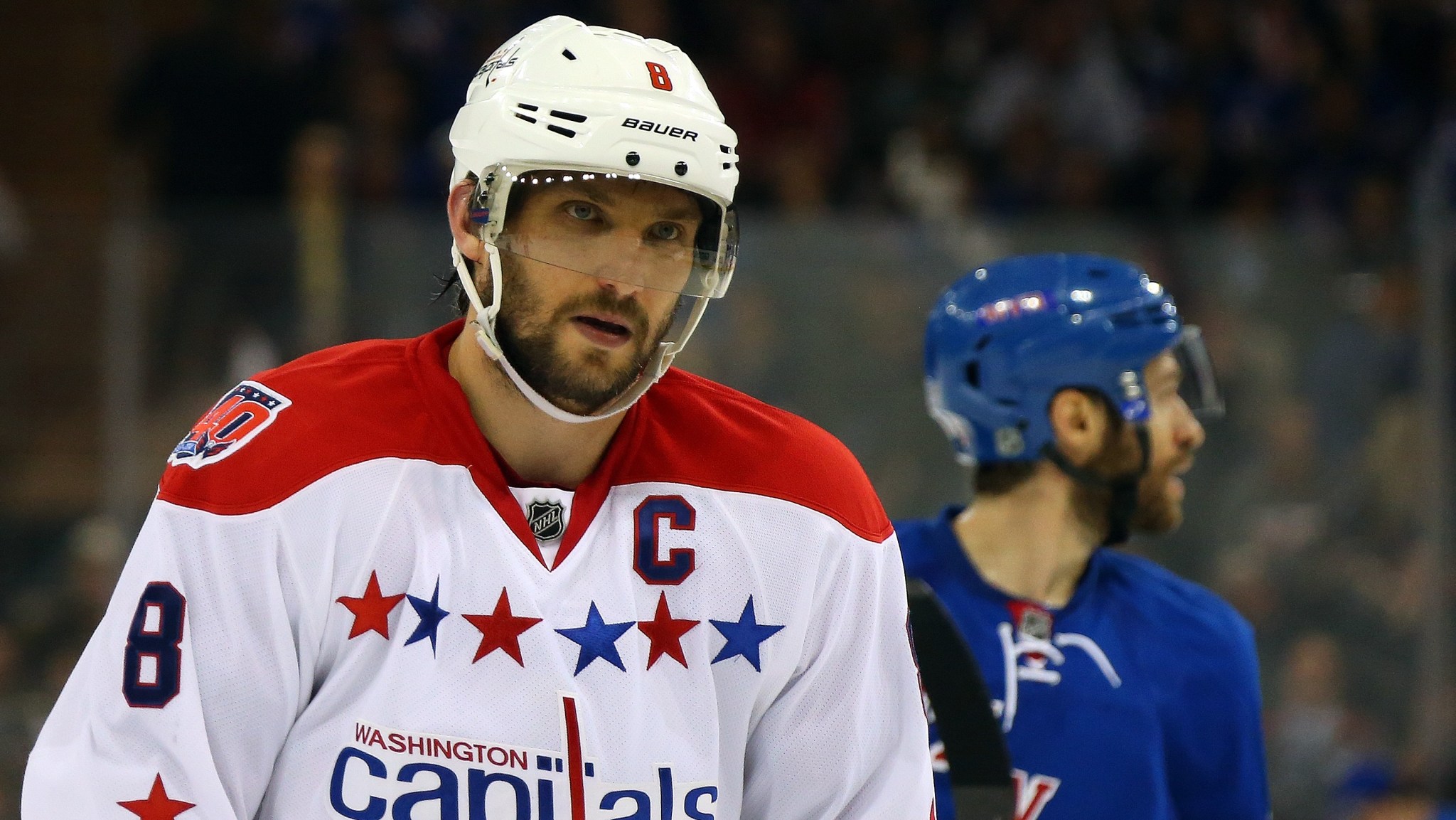 I’m not sure what’s actually going on here, but I know it’s awkward.

I think we can agree that the “Vhat are you DEW-ing?” guy needs to start showing up every time the Sabres are recruiting anyone. Mike Babcock needs that guy right now.

She’s the clear star of this prank, in which she and Jamie Benn’s mom tell their sons that they want to become agents and move in with them.

That’s some solid mom-pranking right there. Although I’m not sure Seguin’s really a guy you’d want to move in with.

Poor Penguins. Head down cutting across the blue line, never saw it coming.

@penguins Strange. Our latest observations show no Penguin activity currently on ice in Pittsburgh. Where did they go?

The issue: After losing Game 6 to the Rangers, Alexander Ovechkin said the Capitals would win Game 7.

The outrage: Oh no! He just gave the Rangers bulletin-board material!

Is it justified? No, since Ovechkin didn’t say anything especially controversial. It wasn’t even a real guarantee, although everyone tried to turn it into one. He just said that he expected to win, which is exactly what you’d want him to say. In a league where we all complain about how boring the players are, it was yet another example of someone saying something vaguely interesting only to see it turned into a fake controversy. Luckily, not many were biting — even oldest-of-the-old-school Don Cherry didn’t think it was a big deal, and nobody on the Rangers seemed to care.

But the incident does raise an important question: Do NHL teams still have bulletin boards? I don’t think they do. I’ve been in a few locker rooms, and I can’t remember seeing one. In fact, I don’t think I’ve seen an actual bulletin board anywhere since 1996, so I’m pretty sure no one in the NHL is using one to post articles that were clipped out of the newspaper.

That said, it is kind of fun to imagine Rick Nash wandering by with a cup of coffee, scanning the ol’ team bulletin board to see if there’s any update on Carl Hagelin’s missing dog or whether Henrik Lundqvist’s band needs a new drummer, then getting to the Ovechkin quote and being outraged.

But yeah, we need a new term for “bulletin-board” material. I’m open to suggestions.

The Blackhawks and Ducks face each other in the Western Conference final, so this week’s obscure player has to be the greatest Hawks/Ducks legend of them all: Stu “The Grim Reaper” Grimson.

In addition to having arguably the greatest nickname in hockey history, Grimson had a 14-year NHL career in which he played for … well, pretty much everyone. But his most memorable moments came with the Hawks and Ducks. In Chicago, he established himself as one of the most feared enforcers in the league, going toe-to-toe with heavyweights like Bob Probert and occasionally going completely nuts because it was the Norris Division and that’s just what you did back then.

In 1993, Grimson was claimed by Anaheim in the expansion draft, and he quickly became one of the team’s most popular players. He had a second stint with the Ducks later in his career, and overall, he totaled 729 games and scored 17 goals, only some of which he accidentally deflected in with his face.

According to legend, Grimson kept a photo of himself above his locker so that “when I forget how to spell my name, I can still find my clothes.” But he was no dummy; after he retired, Grimson got his law degree and became a lawyer. He’s now a TV analyst for the Nashville Predators.

Did you enjoy the hockey game last night? No, because there wasn’t one. There isn’t one tonight either. The NHL is taking a little break before finally resuming action tomorrow, when the Rangers host the Lightning.

This seems like a weird strategy to capitalize on all the momentum from the first two rounds, no?

And yet, this is pretty much how the NHL operates this time of year. We get series with mysterious multiday gaps, often followed by huge chunks of time off for one or more teams. By the time the Ducks and Hawks drop the puck on Sunday, Anaheim will have been out of action for a week and Chicago will have been off for a ridiculous 10 days.

Clearly, some of this is out of the league’s control. Unlike the NBA, the NHL never starts a new round until the current one is done, so when this year’s Western series ended quickly and the Eastern ones went long, a gap was inevitable.

But that’s all the more reason to tighten things up as much as possible, and the league doesn’t seem interested in doing that. Why not schedule Game 1 of the Hawks-Ducks series for tonight, or even last night? You’d have to have waited until the Lightning eliminated the Habs on Tuesday night, but surely two days is enough time for the Hawks to get on a plane.

And yes, building availability is an issue. Honda Center is booked for a concert tomorrow night (and according to some, it needs tonight to set up). But concert bookings don’t just fall out of the air — arenas know they have an NHL tenant, and you’d think there’d be some flexibility built into the schedule during playoff time. Remember, Eric Clapton’s recent concert at Madison Square Garden was booked contingent on the Rangers not needing the building. If the world’s most famous arena can get a Hall of Famer to move his show to make way for hockey, maybe the league needs to remind the rest of the arenas who their main tenant is.

The bottom line is that big gaps in the schedule kill momentum and fan excitement, especially as the weather gets warmer and there’s more competition for fans’ attention.1 If the league is OK taking its sweet time, and looking like an afterthought in its own arenas in the process, that’s its call. Just don’t be surprised when a chunk of your audience wanders off and finds something else to do in the meantime.

The Lightning advanced to the conference final this week for the third time in franchise history. If they can reach the final, there’s a good chance they’ll face the Blackhawks, which would be sort of cool, since it would be a rematch of the franchise’s first game. That’s the one we’re going to look back on today.

• It’s October 7, 1992, and the brand-new Tampa Bay Lightning are hosting the Blackhawks in their first regular-season game. The Blackhawks are the defending conference champs and the Lightning are an expansion team, so obviously Tampa Bay is going to get creamed. Or will they?

• We’re getting our highlights via ESPN, where our host is Keith Olbermann. I’m going to stop right here because I’m fully aware of what I looked like in 1992, and I’m in no position to throw stones.

• Keith informs us that this game is being played at Expo Hall. That was the fairgrounds exhibition hall the Lightning used as their home arena in their inaugural season. The year after, they moved to the baseball park now known as Tropicana Field. Yeah, the Lightning didn’t really understand how hockey arenas worked. Or maybe they were all booked for concerts.

• We get only a brief clip of the opening ceremony, which is devastating because I’m sure they were awful. Probably not “dancing mushroom men and a terrifying frozen mascot who’ll never be seen again” awful, but still awful.

• Cool special effects on the Lightning logo. Stuff like this and repeatedly dying on the sixth level of Moria were pretty much the only things we knew how to use computers for before the Internet came along.

• It doesn’t take long for us to get to our inaugural Lightning goal, as future terrible Olympian Rob Zamuner sets up Chris Kontos. Get used to Kontos, for you’ll be seeing a lot of him.

• Kontos quickly scores his second, and everyone starts to forget that the Lightning are a terrible expansion team. Luckily, goaltender Wendell Young reminds us by somehow getting scored on during a Chicago line change.

• “Basil McRae to Anatoli Semenov” might be the most expansion-team goal of all time.

• Ken Hodge Jr. scores, then celebrates a little bit too much for the first game of the season. Maybe pump the brakes a bit, Ken. You’ve got … [checks stats] … one more goal to come. In your entire career. Yeah, you know what, go nuts.

• By the way, for you newer hockey fans out there, these things they keep showing are called “goals.” It’s a thing we used to have in the ’80s and ’90s. Don’t worry: They weren’t very fun, and you’re not missing out.

• We’re going to pretend we didn’t hear “Rob ‘Hold’ DiMaio” and point out that, yes, that is current Canadiens GM Marc Bergevin scoring for the Lightning. He seems to be enjoying this Tampa Bay game more than the last one he watched.

• We close out with two more Kontos goals, giving him four total and helping the Lightning establish a record for most goals in a franchise’s first game. Fun fact: Ed Belfour stayed in for all seven goals, yet somehow did not snap and attack anyone. I’m assuming he realized that by helping hockey in the state of Florida get off to a good start, he’d increase his chances of someday appearing in an awesome Panthers music video.

• I like how they make a point of telling us that four goals is a career high for Kontos, just in case you were trying to remember if he ever had a five-spot.

• We close with a quick mention that this was the only game of the night in the NHL, because even back then the league understood it was important to have random weird gaps in the schedule.

Not surprisingly, this game would be the highlight of the Lightning season, even though they finished with a semi-respectable 53 points. Kontos finished with 27 goals, matching his career total coming into the season, then never played in the NHL again. He’s currently sitting by his phone waiting for the invitation to drop the puck before Game 1 of the Lightning-Blackhawks Stanley Cup final, which is scheduled to begin in mid-August.