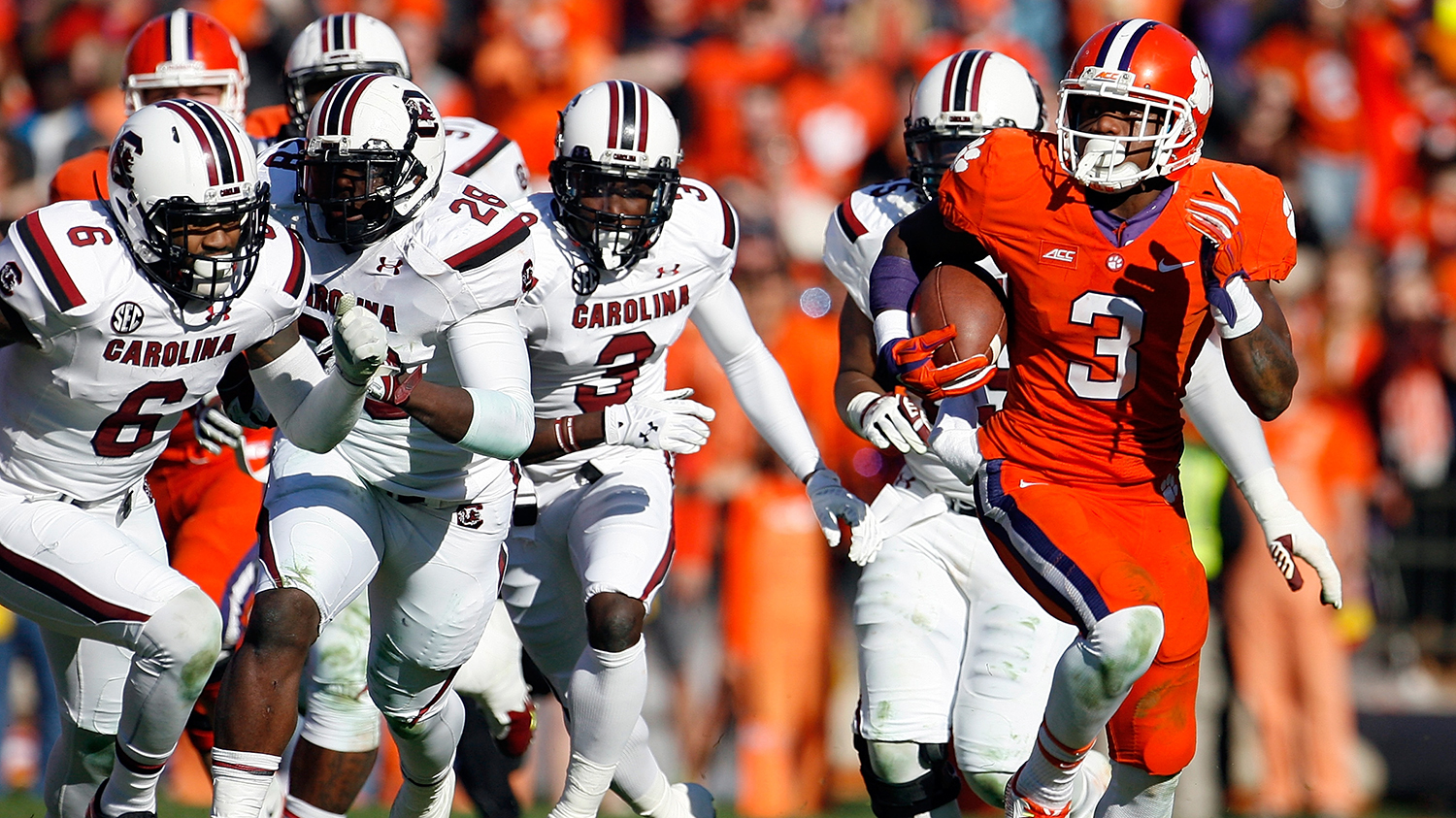 Watching a college football receiver go from prospect to phenomenon is one of the most exciting parts of watching the game. You remember the first time you saw Demaryius Thomas run past an ACC secondary or watched Andre Johnson play like a Hurricane. As offenses in college football trend increasingly toward electric passing games, top-notch receiving talent is more important now than ever. Here’s a look at some of the pass-catchers to keep tabs on this season, focusing solely on the things that truly matter: highlight reels, social media prowess, and endearing story lines.

Why You Should Love Him: Being a top performer on the field is important, but having a great nickname doesn’t hurt either. Think Adrian “All Day” Peterson at Oklahoma, Walter “Sweetness” Payton at Jackson State, “Johnny Football” Manziel at Texas A&M. We can now add “Hollywood” Higgins to the list this season. The 6-foot-2 Mesquite, Texas, product credits his Pee Wee coach with the moniker. “He told me, ‘If you keep making big plays, I’m gonna call you “Hollywood.”’ And I’ve been making big plays ever since.”

Higgins has no remorse as he turns this routine wide receiver screen into a ridiculous touchdown run — one of his career-best four scores on the day against Tulsa. Just watch Tulsa safety DeMarco Nelson stop in his tracks, do a double-take, and realize he has no hope of even pretending to try to chase down Hollywood.

You tend not to get the most candid version of players during press conferences, but “Hollywood” Higgins doesn’t seem to buy into all that hoopla. He walks right up to the podium, let’s out a soft yet exclamatory “Hollywood” and goes about his business with his postgame breakdown.

Anecdote Worthy of Additional Adoration: Higgins has the support of the entire Colorado State athletic department with his own web page. That’s a whole different level of personal branding.

Why You Should Love Him: Start with the grinding, go-get-it spirit in the 6-foot-2 wideout from Crete, Illinois. Unfortunately, the best example of Treadwell’s refusal to give up ended his 2014 season. Down 35-31 to Auburn with under two minutes to go, Treadwell caught a simple screen pass, turned upfield with blockers leading the way, and looked for a game-winning touchdown to add to his ever-growing highlight reel. Instead, Auburn’s Kris Frost’s last-ditch effort tugged Treadwell down awkwardly, leading to a not-so-fun-to-see leg injury (Google it at your peril) and a fumble. In the end, the Tigers scampered away with a win in Oxford.

How can you not root for Treadwell’s return to college football after that?

Why Secondaries Should Tread Lightly:

When it comes to elite receiving maneuvers, the back-shoulder fade ranks high up there. Here, Treadwell makes it look easy against Nick Saban’s disciplined Alabama defense.

The above video shows how a standard shallow cross for an easy first down can lead to the demolition of a defense.

Anecdote Worthy of Additional Adoration: You know what takes a social media post into the stratosphere? Athletic absurdity and highly entertaining narration. We’ve got all of that, plus trampoline flips.

First up, just a normal, casual flat-footed flip-and-catch. The narrator, though, is straight fire: “Freak, right here, freak. Freak of the Week.”

Why You Should Love Him: After taking the ACC by storm last season, Scott was deemed a freshman phenom. He showed flashes of brilliance, showcasing fancy footwork and tough running ability. He also happens to live with his Heisman-contending quarterback, Deshaun Watson. Don’t sleep on Clemson’s aerial attack.

How does one acquire acclaim quickly on the collegiate stage? Well, just take an end-around 70 yards, artfully tip-toe along the sideline, and score a touchdown against an archival.

Who say's that just because you're a wide receiver that you can't drop dimes? #SideSkillSunday @tayscott7 #Buckets pic.twitter.com/7kFwl6rLYl

Get ready for Watson rotating out in the flat, running deep streak patterns, and catching tosses from Scott this season. You’re welcome, ACC defenses.

The Clemson football version of Cribs sells itself. Respect to Scott for being such a tidy Tiger; that place is seriously spotless. All we need here is more slow-mo, rewinds, and “What the Hook Gon’ Be” instrumentals.

Why You Should Love Him: This Charlotte native has the WR trifecta: size (6-foot-4, 224 pounds), leaping ability, and speed. North hit the ground running in Knoxville, making this toe-tapping touchdown catch against SEC East rival Georgia as a freshman in 2013. Injuries cost him his sophomore campaign from reaching full flight, but SEC rivals should look out for him in the vertical passing game in this, his first draft-eligible season.

Justin Worley quite literally just chucks this ball up in the air. North uses almost every body part necessary to keep the pigskin from grazing the ground.

Why You Should Love Him: Every recruiting season for the better part of a decade, college football fans have witnessed Alabama sign highly touted classes, one after another. Names jolt to the forefront and faceless prospects turn into burgeoning stars for the Crimson Tide. Foster hasn’t had that moment yet, but he’s been patiently waiting for his time. Once regarded as the top-ranked wide receiver in the country, Foster will be an offensive focal point for Tide fans this season.

Anecdote Worthy of Additional Adoration: Apparently, Foster has a fetish for gummy bears and other chewy candies. If there’s anything that last year’s pre–Super Bowl coverage taught us, it’s that eating candies has a direct correlation with high-quality performances on the field.

‘The Lowe Post’ Podcast: Amin Elhassan on Dante Exum and the Jazz, the Sixers, and Other Intriguing Teams