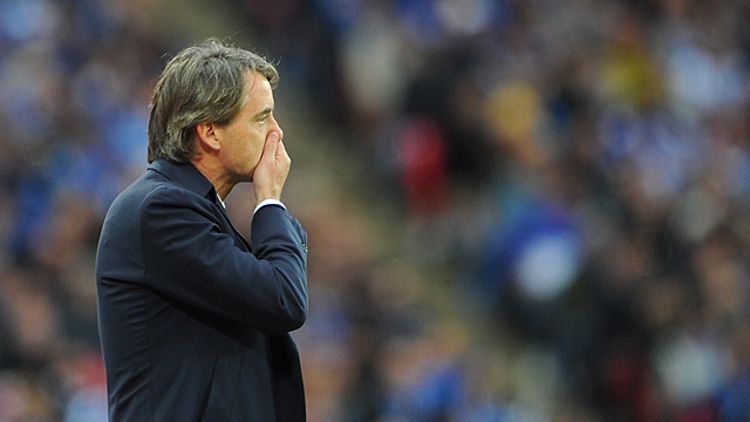 During what would be a doomed FA Cup final performance at Wembley Stadium on Saturday, Manchester City fans sang for their doomed manager, Roberto Mancini. The divisive Italian still had a place in the hearts of the club’s supporters, even if he had fallen out of favor with City’s relatively new front office regime (the transplanted Barcelona duo of Ferran Soriano and Txiki Begiristain) and, most important, the club’s chief executive, Khaldoon Al Mubarak. When Wigan’s Ben Watson headed in a 90th-minute goal to give the undersupported, underfunded underdogs an FA Cup victory that pretty much justified all the “romance of the Cup” propaganda that goes along with the competition, the world (at least the football-watching world on Twitter) rejoiced.

Seemingly the only people cheering for “the people’s club” (as City is known) were the people who had always been doing so — the fans who had been born or bred into fandom. Manchester City will finish second in the Premier League this season. They won the league last season, and finished third the season before that. Yet there is still a sense that, despite truly outrageous amounts of money spent by City’s owners, outside of their core fan base this club isn’t loved. Or perhaps better put, they are not admired.

This wasn’t how things were supposed to go. There were blueprints in place to build Manchester City into a global football giant, equal in stature, if not quite historical significance, to Real Madrid, Barcelona, Bayern Munich, and their neighbors, Manchester United. After bombing out of the Champions League and losing the Premier League some time around Valentine’s Day, the FA Cup was a last chance for City to put a silver lining on an underwhelming season. Considering how well-documented Manchester City’s attention to detail is (they famously have 30-page color-coded documents about 15-year-old prospects), things had gone quite off the rails.

And apparently it was all Vicky’s fault.

Oh, you don’t know Vicky? I’m talking about Vicky Kloss, Manchester City’s communications executive. She may seem like a minor figure in European football. I, personally, had never heard of her, until Mancini brought her up multiple times in his post–FA Cup final press conference. He was addressing the not-small matter of his impending dismissal from the club, and the likely arrival of Malaga’s Manuel Pellegrini as his replacement. And he was not having it.

“The people, Vicky, the other people who work for the press [office], I don’t know why they don’t stop this rubbish. You wrote this for the six months, and for the last two weeks. It’s too much. I don’t understand why. For football I talk and I take responsibility in the press. For this you need to talk to Vicky and the other people.”

The news about Pellegrini’s possible hiring came at the end of one of the craziest weeks in Manchester sports history. Think about it: In one week, Alex Ferguson retired from Manchester United, Everton’s David Moyes was announced as his replacement, Wayne Rooney asked to be transferred, and it was reported that Mancini would be fired and Pellegrini would step in. And that last bit came out before Man City played in the FA Cup final!

City certainly played like a team that knew it would be playing for a different manager next season. With second place sewn up, it could have gone for broke against the likely-to-relegated Wigan. Instead it was the Latics that played like the team with nothing to lose. After the match, Mancini did little to dissuade the media from the idea that all the pre-match controversy distracted his team. “The people who worked with us around the team, they are not strong enough for this job. Also they should improve. I am strong because my back is very strong and I don’t have any problems with this.” Who are these people? “Other people. Vicky.” Right. Vicky. Got it.

Here’s the thing. I think it’s undignified for a manager to have to do his job under the circumstances Mancini finds himself in; to have someone being openly recruited to do your job, to have your firing be a poorly kept secret. I thought the same thing in 2009 when Manchester City fired Mark Hughes after publicly courting another hot-ticket, well-regarded continental manager: Roberto Mancini.

Which doesn’t make it any more or less wrong that Manchester City is doing what football clubs and businesses do every day: decide that they want to go in a different direction. And if Mancini is curious about why he’s being replaced, he need only look in the mirror.

Under Mancini, the club has won trophies (the 2011-12 Premier League and the 2010-11 FA Cup), but it struggled to win affection. This was always going to be a problem for as long as he was the manager. He is just not a very likable person. I’m sure Manchester City fans view him as a guy who took mercenary little shits like Samir Nasri and Carlos Tevez, and big galoots like Edin Dzeko and Yaya Toure, and Bond villains like Pablo Zabaleta and Aleksandar Kolarov, and molded them into champions, bringing the club its first silverware in decades. If a guy does that, he never has to buy his own beer for the rest of his life. I get it.

But, sadly, Manchester City’s owners are not trying to appeal to the fans they already have. They’re trying to appeal to fans in Kansas City, Bangkok, Khartoum, Mumbai, and Manila. Whether or not some kid in Asia cares what Mancini says about someone named Vicky, I don’t know. But clearly someone in power cares. Clearly someone, or some people, at Man City thinks that Mancini is not only not producing an entertaining-enough product (which I happen to agree with), he is not representing the club with dignity. He is not who they want to be acting as the face of the franchise.

There’s a quote in David Conn’s fantastic book Richer Than God …, from Al Mubarak: “Sheikh Mansour is a huge football fan, he follows it very closely, and I think he has always wanted to have a European club that he can take and build and become one of the top clubs in the world. There is an enjoyment that comes with owning it, a pleasure, but also he is an astute businessman. He believes that you can create a value proposition in football that has not yet been accomplished.”

Manchester City is not a charity for these guys. They look at it like this: A mid-tier team has value. You can pump in capital, bring in talent, and hire a good manager. But the only way you create value is by making a desirable, entertaining, and, yes, lovable product. You can’t just have the Death Star sitting there; there has to be some appeal. Mancini was a sore loser, a hard man to please, and tough trainer of athletes. And in both victory and defeat, he seemed to lack a certain dignity. City will not have that problem with their likely incoming manager Pellegrini.

Pellegrini’s former boss at Real Madrid, Jorge Valdano, described his playing philosophy as such: “He likes his team to be the protagonist: He seeks to dominate possession and always attack.” Mancini is a notorious hothead, but his Manchester City teams — with the exception of a handful of performances last season — were rather reactive. Nobody turned on the television to watch the beautiful team football of Manchester City, not like they tune in to see Bayern, United, Borussia, Barca, or particularly good Arsenal teams.

Not only will Pellegrini put forward a more entertaining product, he is likely to be more of a gentleman about things if they go haywire. One of Mancini’s go-to complaints this season was City’s inability to recruit Arsenal’s Robin van Persie. The Dutch striker left North London for Manchester United and arguably won the club its 13th Premier League trophy. Since preseason, Mancini has been banging on about this, despite having, on paper, one of the most impressive collections of attack talent in all of Europe.

You likely won’t hear Pellegrini moaning in public about this kind of stuff. He has worked with fewer resources in the past, building Villareal into a Champions League club and, this season, working wonders with a Malaga team that saw two of its best players — Santi Cazorla and Nacho Monreal — sold to Arsenal. This is a guy who inspires something in the teams he manages. Read this excellent take on the man by the Guardian’s Sid Lowe. When Malaga players weren’t getting their wages, Pellegrini threatened to walk until the club made good on its contracts. He’s a man who inspires impassioned testimonies from his players, like this one from Malaga’s Joaquin: “Everyone knows Pellegrini’s philosophy and his history, but he’s a guy who gives you so much confidence, who acts with so much humility that, somehow, he always gets the best out of every player: He is the central piece in this jigsaw.”

Can you imagine a manager like that with Manchester City’s resources at his disposal? The club might just turn the world blue after all.

NBA Playoffs Shootaround: The Monocle and the Falcon