Living on the Edge: Breaking Down the Top Four Pass-Rushers in the 2015 Draft Class 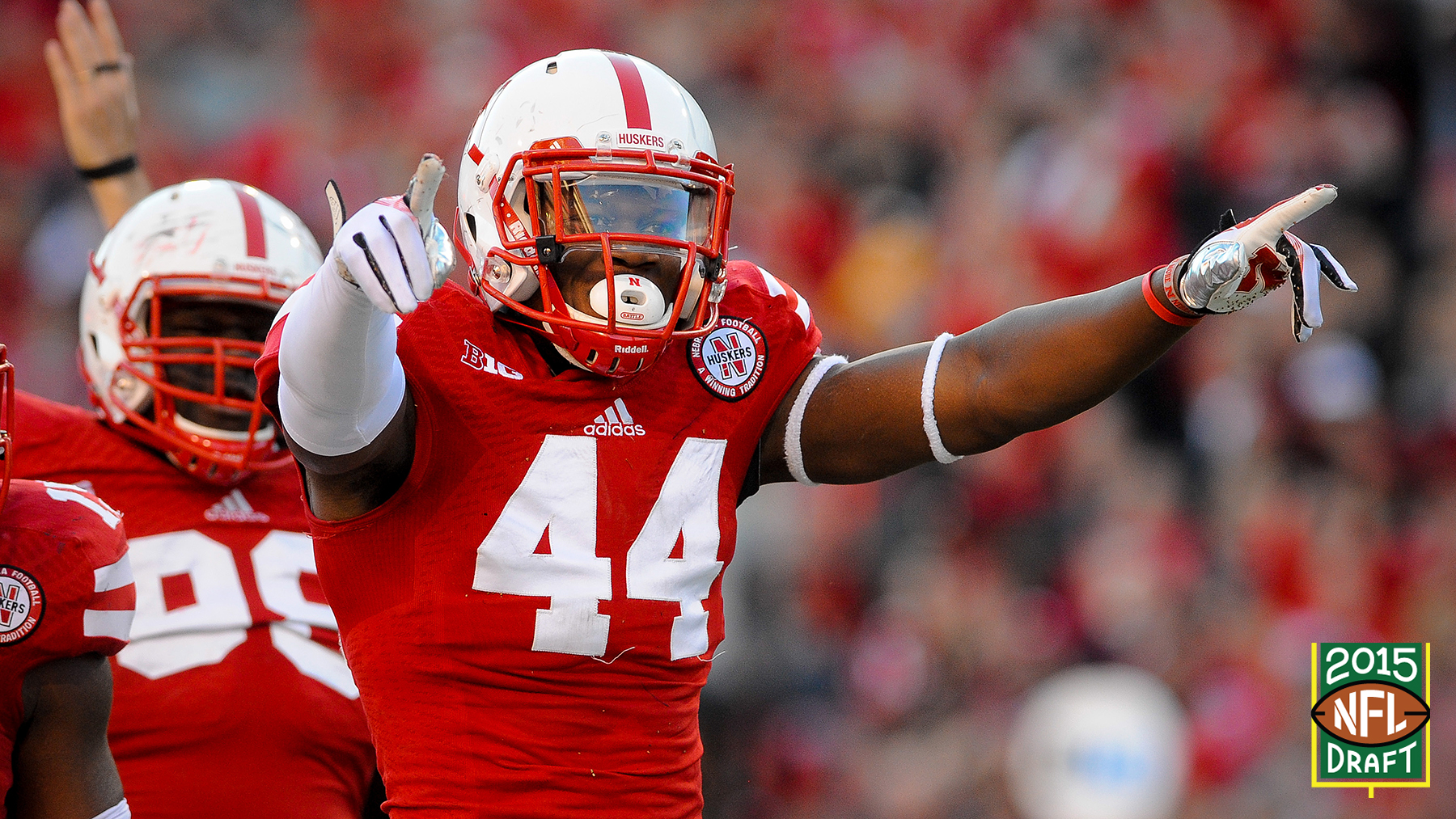 It speaks to Gregory’s potential that some people still expect him to go in the top 10 even though his trip to the combine in Indy wasn’t very encouraging. In the span of just a couple of days, Gregory tested positive for marijuana and weighed in at a paltry 235 pounds.

Yet somehow, depending on what a team needs, he still might be the best option out there. The 6-foot-5 Gregory is attractive because of his length. He uses it well, both as a pass-rusher and to help string out runs to the outside. It’s occasionally tough for offensive tackles to get their hands on him, and when Gregory has his arms fully extended, he’s usually a quick move away from getting to the quarterback. He’s a giraffe — a horrifying giraffe that picks his teeth with quarterback bones. With a frame like his, though, that’s to be expected.

What’s surprising is just how well he moves in space for a guy that tall. Gregory is excellent at changing direction against the run, and he does his best pass rushing when he’s given some room to work and the chance to pick whether he’s going inside or out. At Nebraska, he spent most of his time with his hand on the ground, but his snaps from a two-point stance make it easy to imagine him as an outside linebacker. That’s when he looks the most like Aldon Smith, who might be the best-case scenario comparison.

The problem is that at 6-foot-4, Smith weighed 263 pounds at the combine — nearly 30 more than Gregory. In NFL history, two players 6-foot-5 or taller and weighing 245 or less have ever had a 10-sack season. Two. The good news is that on tape, Gregory plays with way more strength than someone with his frame probably should. His 24 reps on the bench for a 235-pound dude with 34-inch arms is a great showing. Even as a defensive end, he does a good job setting the edge against the run, and he easily converts speed to power as a pass-rusher. That comes from the same source as his change-of-direction prowess. The guy is way more flexible than guys his height usually are.

Of the players in this piece, Beasley is comfortably my least favorite. But it’s worth mentioning that I recently had nothing but Oreos for dinner, so take my word for what it is.

Beasley dominated the combine. Every single one of his testing numbers — 10-yard split, 40-yard dash, bench, vertical, broad jump, three-cone, and 20-yard shuttle — was in at least the 84th percentile1 for defensive ends, and four of those numbers hit the 97th percentile. Running around with little to nothing on, he’s the star of this entire draft.

The problem with Beasley is his play doesn’t line up with those numbers, especially when it comes to strength and change of direction. On tape, he looks like a 246-pound edge player with a narrow lower body who struggles to anchor against the run, and a pass-rusher who rarely overwhelms tackles with power.

Missouri’s Shane Ray has similar weaknesses, but I prefer him simply because I think Beasley isn’t quite as good rushing the passer. I like Ray’s first step more, and overall, I prefer how Ray uses his hands. Beasley’s hands aren’t bad. In fact, his subtle, go-to chop-rip move is actually really effective. Every time he works it well, he shows off an ability to bend the edge, work back to the quarterback, and finish with a closing burst as well as any of these guys.

I just worry about what Beasley’s going to do when that move doesn’t work. He doesn’t have many counters — although I’d like to see what his inside spin looks like when a guard isn’t tasked with sitting there and waiting for it. Too many of his snaps end right after they start. It’s not a lack of effort; it just seems like he runs out of options.

According to Fowler, we don’t need to speculate much about his NFL future: He’s playing Leo for the Jaguars for the next decade. I wouldn’t be surprised if the Jags took Fowler, but when it comes to scheme fit, I’m not sure he makes any more sense than a guy like Leonard Williams. Sure, you could stick Fowler on the right side of the Jacksonville defense, put his hand on the ground all game, and leave it at that. But it kind of feels like a waste.

What jumps out when watching Fowler is just how many different roles he can play. He lined up everywhere for Florida last year, and I’m talking in the same game. With his hand both on and off the ground, he could slot in at any spot along the entire defensive line, and sometimes at linebacker.

This is where Fowler has a leg up on the other players in this group. He absolutely chews up those last five to seven yards between him and ball. Sometimes this happens as a pass-rusher, like above, but more often, it comes against the run. He had the best 10-yard split of any edge player at the combine, and that shows up on tape. Physically, there’s a lot to like. He’s the biggest of these guys — a sturdy 6-foot-3 and 261 pounds — and as a result, he’s able to hold up against the run fairly well. He also shows plenty of flexibility and mobility for a guy his size.

The question for Fowler is whether his versatility works against him. Does the number of different positions he played mean he lacks nuance at any one of them? Most of his pass-rush productivity came when he redirected inside, often against totally overmatched right tackles setting for a speed rush. That’s probably not going to work at the next level. Fowler doesn’t have many counters, and he doesn’t use his hands particularly well. As a pass-rusher, he’s probably the rawest of these four, but with the way Fowler’s built, his initial burst, and that closing speed, he might have the most potential out of anyone in this group. That’s what a team in the top 10 will be betting on.

Watching clips of Ray is rough for me. It’s not only that I’m a Mizzou grad who’s seen most of his college career. It’s also that the gap between Ray’s highs and lows means playing Ping-Pong with my emotional health.

For me, Ray’s best is better than any rusher in the class. This is Ray drinking D.J. Humphries’s milkshake against Florida. Humphries is considered one of the quickest tackles in this entire draft class, and Ray shoots by him like he’s standing still. There are plenty of plays like this from Ray’s senior year — more or less a reenactment of the Quicksilver kitchen scene from the most recent X-Men movie. His first step is not of this world. The way he blasts out of his stance reminds me of Cameron Wake, which is one of the reasons it’s easier for me to picture Ray as a defensive end in the NFL. Wake’s production took a serious dip when he was asked to play outside linebacker, and considering Ray’s explosiveness with his hand on the ground, and the rigidity he’s shown in limited coverage snaps, he looks equally ill-suited for that job.

I’m also a fan of Ray in close quarters. His hands are crazily active, with a violent club, a rip to go with it, and a quick swim that acts as a lethal counter. Ray’s ability to do damage while bumping inside on passing downs is impressive stuff for someone who checks in at 245 pounds. But therein lies his biggest issue. Bigger tackles can swallow him whole, and sadly, his 33 1/8-inch arms don’t give him enough length to overcome that lack of bulk. If he’s going to play defensive end, he’ll need the sort of Red Bryant counterpart on the left side that Chris Clemons (6-foot-3, 254 pounds) had in Seattle — an end built more like a tackle, who can two-gap when necessary and help cover up any deficiencies Ray has against the run. In terms of both scheme and bodies, it’s why I think he makes a lot of sense for Dan Quinn in Atlanta.

The last thing that’s notable with Ray — a trait that pops up over and over when you watch him — is that he plays like his hair is on fire. He’s relentless in getting to the quarterback and pursuing the run. Usually, it’s a benefit, but occasionally, Ray’s wasting effort by hand-fighting or clubbing so hard that he gets off course on the way to the quarterback. There are worse problems to have, though. The guy never stops.

OK, I know I said I was only doing the top four, but give me this one. When I was sitting in a barbershop with Danny Shelton a couple of weeks ago, we were watching Beasley’s episode of Sport Science on ESPN. We got on to the subject of pass-rushers, and Shelton, admitting his biases, said Kikaha was still the best one he’d seen in this year’s draft. It was enough to send me back to Kikaha’s tape, and after watching it, I agree with him.

No pass-rusher in college football was more productive over the past two seasons than Kikaha. He had a Division I–best 19 sacks last season after racking up 13 the year before. He didn’t impress during the draft process — not after running a 4.9 at his pro day, while facing questions about the two ACL surgeries he underwent in college — but the guy just knows what he’s doing.

The respectable club-rip of Beasley has nothing on the one Kikaha throws out every once in a while. An ex-judo champion, he wastes no movement with his hands, often tossing aside a tackle’s arms without much effort. Add those talents to an insane amount of balance and the most natural bend back toward the quarterback that I’ve seen among this group, and for my money, you get the best pure pass-rusher in this draft. Seriously, just go watch the highlights. He’s an instructional video. There was another guy in the 6-foot-3, 260-pound range who led the nation in sacks his final year of college before running a 4.84 in the 40 before the draft. His name is Terrell Suggs. Kikaha will fall because of the sprint times and the injury history, but if I were picking a single pass-rusher from this draft — and again, Oreos for dinner recently — it would be Hau’oli Kikaha.