Licensed to Ill? How the Brooklyn Nets Have Borrowed From Manhattan’s Beastie Boys 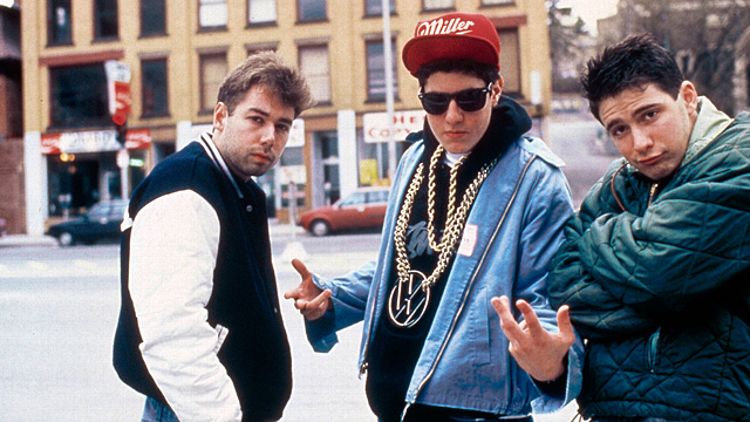 Before Jay-Z took the stage September 28, on the Barclays Center’s opening night — before he christened the building, before he consummated his home borough’s ascendance — we got a short video ticking off a selective list of Brooklyn’s accomplishments. “1862: BROOKLYN RAILROAD BEGINS OPERATION” and “1893: BROOKLYN BRIDGE COMPLETED” and “1895: BROOKLYN MUSEUM FOUNDED.” We saw “1913: EBBETS FIELD OPENS” and “1945: JACKIE ROBINSON JOINS THE BROOKLYN DODGERS” and “1949: MARCY PROJECTS BUILT.” And then the jouncy jazz riff playing under the montage cut out for the bone-crunching guitars of “No Sleep Till Brooklyn,” and a string of Brooklyn babies were trumpeted: Basquiat, Biggie, Jordan, Aaliyah, Tyson, ODB, and Adam “MCA” Yauch, born in downtown Brooklyn in 1967. Twenty seconds later — before the montage picked up speed beyond decipherability, as if to suggest the borough’s simply overwhelming success rate — we saw Yauch again, along with The Beastie Boys: “1986: LICENSED TO ILL RELEASED.”

If you’d spent time in the city in the summer months before the arena opened, Barclays’ bear-hug embrace of the Beasties that night wouldn’t have necessarily surprised you. Because plastered on subway cars and bus-stop surfaces in all five boroughs was the central phrase of the Nets’ marketing campaign — “Hello Brooklyn” — and that phrase originated on “B-Boy Bouillabaisse,” the last song on The Beastie Boys’ second album, Paul’s Boutique.

Paul’s Boutique is famously, monstrously overstuffed with a dizzying range of samples — by some accounts, as many as 300. (It’s also one of the last albums that could afford to do so; eventually the law caught up, and clearing that kind of sample load became prohibitively expensive.) “Bouillabaisse,” named after a Marseille fish stew traditionally made with scorpion fish and sea robin and a whole grip of other ingredients, finds the Beasties sorting out those manifold influences neatly: It’s a schizophrenic patchwork that moves cleanly from one segment to another, nine in all. The fifth segment is “Hello Brooklyn,” which kicks off by co-opting the 1940s hit musical On the Town and wraps up by twisting Johnny Cash’s “Folsom Prison Blues”: “Well I shot a man in Brooklyn … ” In between, a booming bass shudders and Ad-Rock’s nasally squeal sings out the money phrase: “Hellooooo Broooklyyyyyyyyyynnnn!”

In 2007 the Miami producer Bigg D dusted off the track as “Hello Brooklyn 2.0,” the Jay-Z and Lil Wayne collaboration on American Gangster. Bigg D touched up the drums and added a few flourishes, but otherwise, the beat’s mostly identical. While Wayne and Jay go in — anthropomorphizing the borough into a sexy lady they’d like to romance and, maybe, someday, down the line, impregnate — Ad-Rock’s yelp rings clearly.

For the Nets, “Hello Brooklyn” was a perfect phrase to nab. If a passerby recognized it, most likely it’d be for the Jay track, and that’s just good synergy. If it wasn’t recognized, as was more likely the case, it worked well as a standalone entreaty. “Hello Brooklyn” posters were made, introducing the roster as personable regular Joe’s. “I’m no. 11, Brook Lopez, 20-point scorer and Batman’s biggest fan,” read one. “I’m no. 45, Gerald Wallace, All-NBA Defender and off-season fisherman,” read another.

I switch trains a lot at the Atlantic Terminal subway station, the one that now opens directly onto Barclays, which means all summer I was staring at those posters. I had no quibbles with the merits of the marketing blitz, but kept wondering two things. First, are The Beastie Boys getting money for this? And second, isn’t it a bit odd that a band with little actual connection to Brooklyn has been used so prominently within the Nets’ (wildly successful, it seems) campaign to forge a bond with the people of their new home? It might sound like splitting hairs, but there’s something resonantly off about a band as quintessentially downtown (that’d be the “downtown” of the “moneymaking Manhattan” variety) as The Beastie Boys getting labeled as representatives of Brooklyn.

Let’s start with the big one: The Beastie Boys didn’t play their first Brooklyn show until the end of their third decade of existence. That show was in 2007, at McCarren Pool, on tour for their instrumental album The Mix Up; it would be their last Brooklyn show, too. At the time, explaining how it could have possibly taken this long for the Beasties to get to Brooklyn, Yauch said “The clubs didn’t really have hip-hop functions in Brooklyn back then. Probably because they would end badly.” In fact, despite some personal Brooklyn connections, nearly all of the band’s NYC history (they’ve got a lengthy L.A. chapter, too) took place in Manhattan.

Yauch was born in Brooklyn, and did go to Edward R. Murrow High School in Midwood for some time. Later, he attended Friends Seminary, a Quaker school in Manhattan. Mike D spent time getting his education in Brooklyn as well, at St. Ann’s. (On “Root Down,” he raps about his commute to and from Manhattan: “Every morning I took the train to High Street station / Doing homework on the train, what a fucked up situation / On the way back up, hearing battle tapes.”) Earlier, he attended Walden, what he has called “this hippie school on [Manhattan’s] Upper West Side.” That’s where he first heard Kurtis Blow’s “Christmas Rappin,” and fell in love with hip-hop. Adam Horovitz was at the McBurney School, also in Manhattan. Yes, in the “Fight for Your Right to Party” video, Horovitz is wearing a T-shirt that reads “Stuvyesant Physical Ed Leader.” But it was original Beasties drummer Kate Schellenbach (later of Luscious Jackson) who attended Manhattan’s prestigious Stuyvesant High School, and that was her shirt. When I interviewed Schellenbach for an oral history of The Beastie Boys in 2011, she explained further: “That was a shirt you got if you sat in the front of the line in gym class. It wasn’t ‘leader’ in a physical way or an athletic way. It just meant that you were the leader of the line.”

In the liner notes to Some Old Bullshit, a collection of their early hardcore EPs, Mike D recalls the beginning of the band: “Our first gig was in [original guitarist] John Berry’s loft on 100th Street and Broadway, at a party for Adam Yauch’s 17th birthday in August of 1981 … It was also in John’s loft that we recorded the oldest of the old bullshit — the previously unreleased, 4 track-cassete [sic] versions of ‘Egg Raid on Mojo’ and ‘Transit Cop’ … We played our first club gig at A7” — located, sensibly, at Manhattan’s Seventh Street and Avenue A. “If you came up in NYC hardcore, you probably know the place. If not, it was like playing in your aunt’s living room — that is if your aunt’s living room had cat pee all over and was a part time crack house … H.R. of the Bad Brains saw us play and gave us a gig opening for them at the closing night of Max’s Kansas City [on Park Avenue South]. Talk about irony. Then we broke up.”

They would, of course, re-form. In 1983 they prank-called Carvel and set it to a beat, and the result, the still-hilarious “Cookie Puss,” got them played in the Manhattan clubs: Rock Lounge, Area, Berlin. Sonic Youth’s Thurston Moore remembers seeing them for the first time at The Kitchen: “I remember Mike D looking out at the audience and saying, ‘I don’t know if we can keep playing, because everybody out here is old and has beards.’” Around the time, Schellenbach recalls, “We all went to Bleecker Street to get matching Carvel T-shirts with our names ironed on.”

They met Russell Simmons at Danceteria. They used to party with Rick Rubin at his NYU dorm, Weinstein. They played Studio 54 once, right after it reopened. After British Airways used one of their songs in an ad without clearing it, they parlayed their settlement money to get an apartment in Chinatown. After that one got partied into oblivion, they moved to Hudson Street, where they wrote most of Licensed to Ill, and that album took ’em all over the place. For Paul’s Boutique they moved to L.A., but still repped Manhattan: That cover panoramic photo is of Ludlow and Rivington, on the Lower East Side.

Oh, also: they were giant Knicks fans. Note: “Got my hair cut correct like Anthony Mason / then I ride the IRT right up to Penn Station”; “I got heart like John Starks / Hitting mad sparks / Pass me the mic, and I’ll be rocking the whole park”; “It looks like rain / Would someone on the Knicks please drive the lane” (That one was regarding the 97-98 squad. Apparently much love for the Charlie Ward era among the Beasties); “I’m like Clyde, and I’m rocking steady.” We could keep going for a while.

It’s not clear what, if any, the legal agreement is between the Nets and the band. When I asked Nets PR, they responded “no comment.” A representative for the band didn’t respond either. A lawyer I talked to explained that “Hello Brooklyn” might not be able to be trademarked, as it’s a common enough phrase, but the use of Beastie Boys song titles in Nets merchandise (most notably on a T-shirt reading “No Sleep Till” on the front and “Brooklyn” on the back; the team also offered a wood sign reading “Sure Shot”) would have had to clear some legal process.

When Adam Yauch died this year, Brooklyn Borough President Marty Markowitz released a statement. “Brooklyn, the Creative Capital of New York City,” it read, “has made so many great contributions to music and the arts, and in the world of hip hop, they don’t come much bigger than Brooklyn native Adam ‘MCA’ Yauch and his fellow Beastie Boys. Of course, Adam’s home borough was immortalized in The Beastie Boys’ 1987 hit, ‘No Sleep Till Brooklyn,’ and he never forgot where he came from with lyrics like ‘Open Letter to NYC’’s ‘At lunch I’d go to Blimpies down on Montague Street and hit the Fulton Street Mall for the sneakers on my feet.” Never mind that “No Sleep Till Brooklyn” immortalizes Brooklyn about as much as “Cookie Puss” immortalizes that dog who was always trying to steal the Cookie Crisp. You can understand why Brooklyn would want to posthumously claim MCA. And you can understand why Barclays and the Nets would want to co-opt the Beasties. Smirking bullshit artist geniuses, they are thoroughly New York City characters. They just don’t happen to be Brooklyn characters.