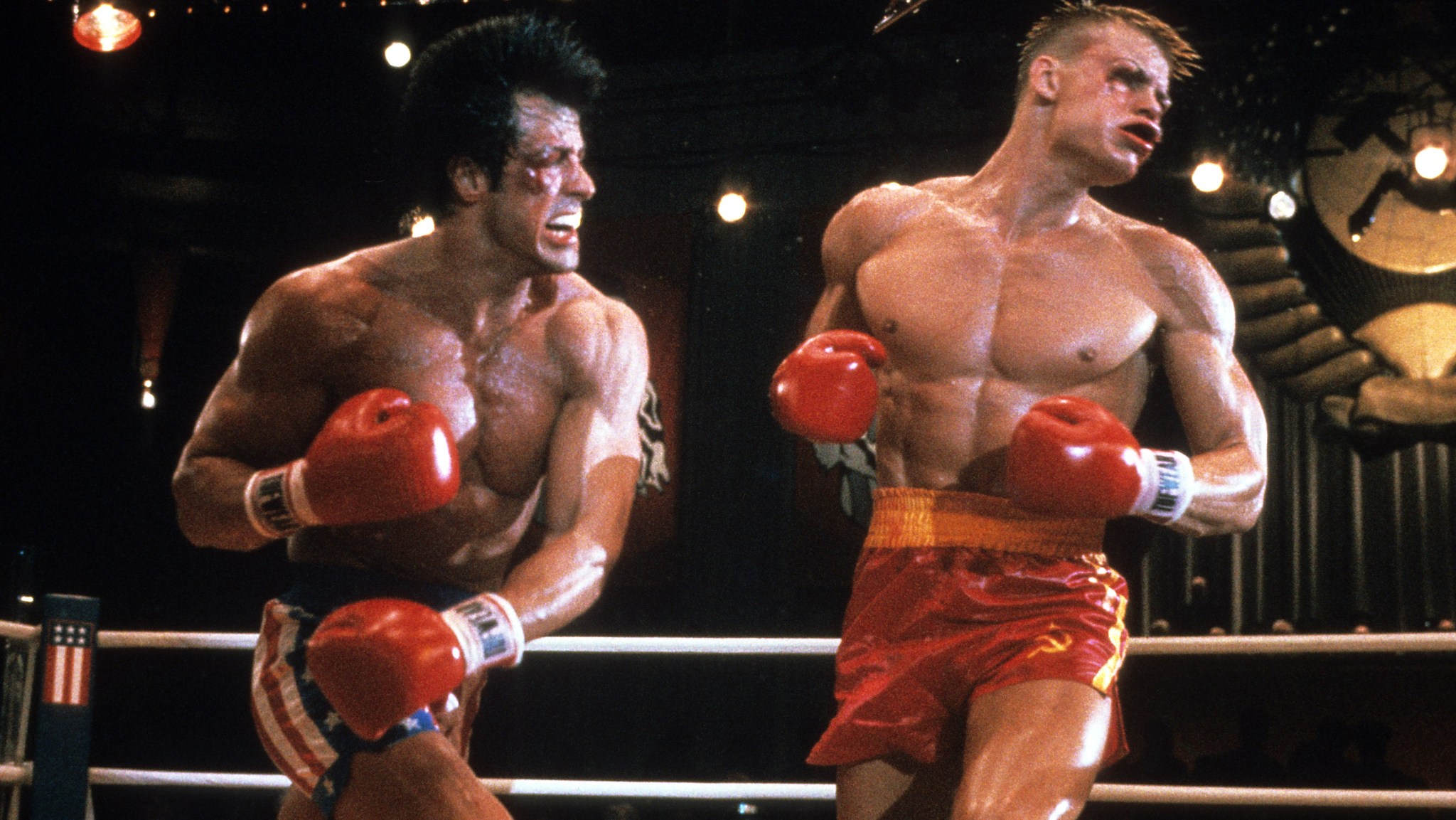 Boxing might be the perfect cinematic sport — it’s a one-on-one, visceral battle of wills. It’s not all that difficult to extract drama from two people beating the crap out of each other in front of a screaming throng of riled-up onlookers. There are so many great movies about boxing from a variety of genres and eras of cinematic history. So, in honor of the latest “fight of the century” between Floyd Mayweather and Manny Pacquiao, we asked the Grantland staff to choose the boxing movies they love the most. Some are gritty tales of perseverance and triumph over adversity. Some are documentaries chronicling the legends of the sport. Others … well, they involve robots and men turning into werewolves. These may not all be the “best” boxing movies, but they are the ones closest to our hearts.

When We Were Kings

Charles P. Pierce: There simply never has been a sporting event quite like the heavyweight championship fight that Don King staged in Zaire in 1974 between George Foreman and Muhammad Ali, and not just because it undoubtedly was the most dramatic victory of Ali’s career. It was an audacious, more than half-crooked extravaganza that was born when King, one of America’s greatest con men, got together with Mobutu Sese Seko, one of the most egregious of the post-colonial African kleptocrats, who stole an estimated $5 billion before they finally ran him all the way to Morocco, where he died in exile. There was a fine three-day music festival featuring James Brown, the Crusaders, the Spinners, B.B. King, and a number of other acts, but the scene was so weird that the late Hunter Thompson never even made the fight.

In 1996, when Leon Gast’s When We Were Kings was released, the strangeness of the whole thing already had been lost to time. Ali was a mute and benign national hero, lighting the Olympic torch in Atlanta and celebrated by a whole lot of people who gladly would have thrown him into jail if he still could have spoken for himself. The movie brings back how marvelously, genuinely strange Ali was, and how that strangeness contributed to his stature as an international hero long before he was transformed into a national icon for a nation that wanted to incarcerate him. More than anyone else, Ali was sensitive to how completely weird the entire scene was, and he used that to fuck with Foreman’s mind before they ever got in the ring. Through the whole film, you can see the gallows rising in big George’s eyes.

Mark Lisanti: I’m not what you would call a “boxing expert,” but I’ve seen enough fights to recognize that nothing that occurs between Rocky Balboa and Ivan Drago in that ring would be considered classical pugilism. In fact, it has a lot more in common with the superhero-punching-a-bigger-version-of-the-superhero battles that make up the the culminating action sequence of virtually every comic-book movie. With Avengers: Age of Ultron opening today, this fight feels more relevant than ever, with our scrappy, stars-and-stripes-swaddled Captain America slugging it out with the malevolent creation of an evil empire hell-bent on global destruction.1 Watching this 10 minutes of vaguely boxing-related warfare, with its full-body windups and face-rattling explosions, is every bit as punishing as today’s Hulkbusting throwdowns. You half-expect the force of their blows to carry them over the ropes, through the Iron Curtain, and into the Berlin Wall, which instantaneously crumbles from the impact.2

Chris Ryan: You can treat boxing gyms either as foundries of redemption or hives of ill repute. I prefer the latter. Boxing gyms should be like pool halls. Maybe there are some actual skills on display, but the real action is taking place on the margins, over the bets, between the hustlers and con men. This is what Diggstown is about.

Diggstown was released in 1992 and lived an unnaturally long life on cable. It definitely falls into the category of movie that I have seen parts of at least 100 times. Oh, this is the scene in which Oliver Platt wonders out loud whether some crooked town elders have been breeding too close to the gene pool? I’m in. James Woods just made a Roots joke to Roots star Lou Gossett Jr.? I’ll make some Redenbacher. That’s not an uncommon phenomenon for Michael Ritchie movies. Whether it’s Downhill Racer, The Candidate, Semi-Tough, or Fletch, his films just have an innate watchability — they’re funny, mature, and genuinely humane.

Holly Anderson: I have an even harder time getting into boxing movies than I do actual boxing. Not only am I paying money to watch two sweaty dudes pop each other in the noggin over and over, but it’s not even real? Hard pass.

REAL STEEL is that rare movie seemingly designed to do nothing but sell robots that fight that actually turns out to be a fun and moving adventure about robots that fight. Not since Short Circuit’s Johnny Five have we seen such an effective and pathos-laden performance out of an android (and sorry, I have to include the surprisingly expressive submarine that formed the emotional heart of The Life Aquatic in this assessment).

My favorite thing about REAL STEEL, among its endless virtues, is that its “life ain’t like the good ol’ days” Americana heartstringer through line beckons us to look back at … now. The good ol’ days, in the REAL STEEL universe, are NOW. Or in the immediate future, after we invent robot boxing but before we slide into inevitable dystopia. That’s not the only miracle at work here. It’s not even the biggest miracle:

Watch like the first minute of this clip. THIS IS A GOOD MOVIE. YOU CAN’T EVEN TELL WHEN YOU’RE WATCHING THE CLIMACTIC SCENE OF THE MOVIE, CAN YOU? HOW DID THEY DO THAT?

Dave Schilling: A fight between a human being and the legendary, mythical werewolf would never be sanctioned by any respectable governing body. It’d have to be broadcast from an abandoned warehouse, and you could only watch it on your computer through an illegal stream from Thailand on a website called FurryFights.net. It’s a completely unnatural, disturbed idea that only the bloodthirsty or the criminally insane would dare dream about. That’s why I love watching Teen Wolf Too. The film, starring a young Jason Bateman, imagines a world in which a college student uses his heretofore unexplored werewolf powers to become a top collegiate boxer. Believe it or not, Bateman’s character — Todd Howard — is recruited by his college because he’s a werewolf and has magical powers. If there aren’t NCAA rules about this sort of thing, there should be. If we learned anything from the original Teen Wolf, it’s that werewolves are unusually strong and have an unfair competitive advantage. You could say it’s absurd to punish someone for being born a werewolf in the same way that it would be inappropriate to punish Shaquille O’Neal for being born gigantic. Sorry, but Shaq couldn’t do backflips and didn’t have giant fangs he could use to rip out your trachea. In the above fight montage, Todd has his way with all of his opponents. It’s not just embarrassing. It’s dangerous!

Amos Barshad: Mark Wahlberg is a famously repressed dude: For all of his latter-day churchgoing, farmers-hours routine, there’s always the Dorchester juvie kid waiting to peek out. And it’s exactly that sliver of mania that makes him effective, again and again, whether it’s shoot-’em-ups or existential crisis comedies — you watch, because there’s always a chance that valve gets loosened. But in The Fighter — playing the dude who does said fighting, no less — he’s just heart. In a filmography marked by careful, building-block career choices, this is the closest Wahlberg has gotten to a passion project; famously, he kept in boxing shape for four years, through all manners of stops and starts on production. And once they got on set, he let Melissa Leo and Christian Bale do goddamn tap dances all over his scenery. Even Amy Adams gets to rage harder! Meanwhile, Wahlberg chills in the middle, doing his po-faced sad-dude routine to perfection. Who else could have pulled that off? Not you.

R.I.P., Grooveshark: A Tribute to a Great Home for Obscure Music, Illegally Listened To