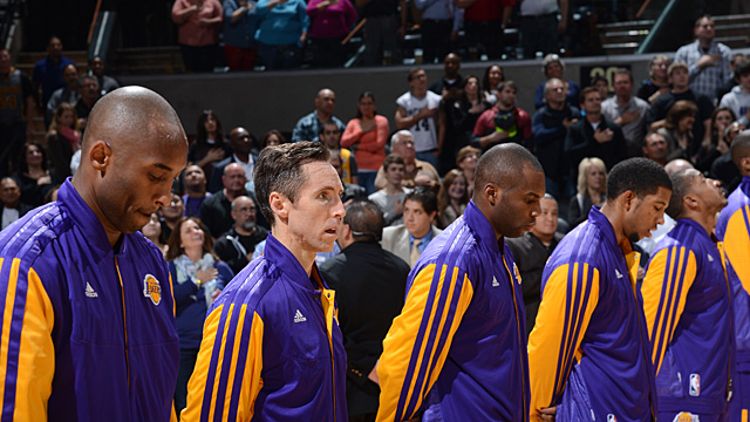 For the rest of the season, Jay Kang will be processing all the calls into local Los Angeles sports-talk radio shows. Aided by a computer program, Kang will spit out what the computer believes to be the most average question asked about the Lakers. And then he will answer that question.

The second-most expensive dog-and-pony show in Los Angeles (Les Misérables is no. 1) headed down to Texas for a back-to-back against the Rockets and the Spurs. They lost both games. Their record now stands at 15-20. Here are your calls:

Hello? I’m on? OK. [Deep breath.] All right, hear me out here. I respect Kobe and the work he puts in, but for the Lakers to win the championship this season, he needs to lead by example. Meaning, he can’t just get his and then expect the rest of the guys to do the same. It’s on Kobe to be more of a leader.

I would agree with this if Kobe Bryant and the rest of the Lakers were all 25 years old and if Dwight Howard seemed like someone who would listen to a kinder, gentler Kobe.

Did the Lakers find something down the stretch of the San Antonio game by playing Earl Clark and Antawn Jamison with Steve Nash, Kobe, and Metta World Peace?

With Dwight’s injury and D’Antoni’s coaching, the Lakers really only have one shot at turning this around. They need to become the late-’90s Warriors and try to win games where both teams combine for somewhere around 260 points. Players like Earl Clark, Jamison, and especially Darius Morris look so lost on defense that it’s hard to figure out when, exactly, they’ll figure it out. Last night, the Lakers got back into the game against the Spurs by running up the court and shooting 3s. They don’t really have the personnel to play that style of basketball, but with Dwight’s injury and Pau’s general ineffectiveness, they really don’t have the personnel (and more importantly, the coach) to play a slowed-down, half-court game, either.

This should start with Steve Nash shooting a whole lot more. It’s possible that Nash might be too old now to finish on those patented, leaning drives to the basket, but he’s still one of the best shooters in the league. He should be taking somewhere between 15 to 20 shots per game.

I just don’t know if Dwight fits with this team from a chemistry standpoint. The rest of the guys accept that this is Kobe’s team. I don’t think Dwight wants to play second fiddle. — Armen from Glendale

Last night, with under a minute left in the fourth quarter and the Lakers down by six, Earl Clark hit a wide-open 3-pointer. The camera cut to Dwight Howard on the bench jumping up and down with his arms around the shoulders of his teammates. It felt like theater — Howard leading by example, as they say, forcing a collegiate energy into a truly dysfunctional team. Howard is one of those unfortunate people who has just enough self-awareness to put on a persona, but not quite enough self-awareness to figure out how to either drop the act or commit himself to it in a convincing and engaging manner. Alex Rodriguez has a similar problem, albeit much worse. Where A-Rod tries to put on a noble, quasi-thoughtful air, Howard goes the route of the lovable clown. Up until last year, that formula worked in Orlando, a city used to gigantic cartoon characters. But the Stan Van Gundy firing left an indelible residue on all of Howard’s ninnying about. He’s no longer the lovable man-child with the creative dunk. That act no longer plays in Los Angeles, and he should drop it as quickly as possible and embrace one, unfair, but undeniable truth: Howard will be loved when he wins a championship, either here in Los Angeles or wherever he decides to sign for next season. If he doesn’t win, he’ll be criticized. That’s just how it goes for top-five guys in the league.

I’m just having a bad time watching Lakers games now. Where’s the spirit? Where’s the energy? This is championship town, and these guys are just walking through games like it doesn’t matter. — Kyle from West Covina

There is something dispiriting about watching this team. I’m certainly not a Lakers fan, but even I find myself feeling a tinge of depression every time I watch Steve Nash throw a perfect pass to Robert Sacre, only to watch Sacre fumble the ball out of bounds and stomp around in frustration like a blue-balled ogre. The Lakers, of course, lost last night’s game. And although they had two shots to tie it up at the end, they played with the same sense of sad desperation. I don’t believe that the Lakers have some death wish and want to blow up the season to spite Kobe. I don’t even believe that Kobe and Dwight have some palpable, actionable feud going on. Instead, the Lakers look more like a team that has no idea what to do. They play well for spurts, but when the energy fades, they more often than not find themselves down by double digits. The experience of watching the team goes something like this: The Lakers are down 10 and playing awful. Then you zone out or flip the channel and when you come back, they’re down 15. You start to zone out again, but then Kobe hits two absurd 3s in a row, and you think, “Hey, this might be a game!” but then you look down at the score and see that these Sisyphean Lakers are still down by 10. The team seems similarly flummoxed — outside of Dwight’s pleas for defense and chemistry, every Lakers postgame press conference and locker-room interview is just a variation of “We need to just be better,” which translates to “I have no idea why we suck, but we really suck.”