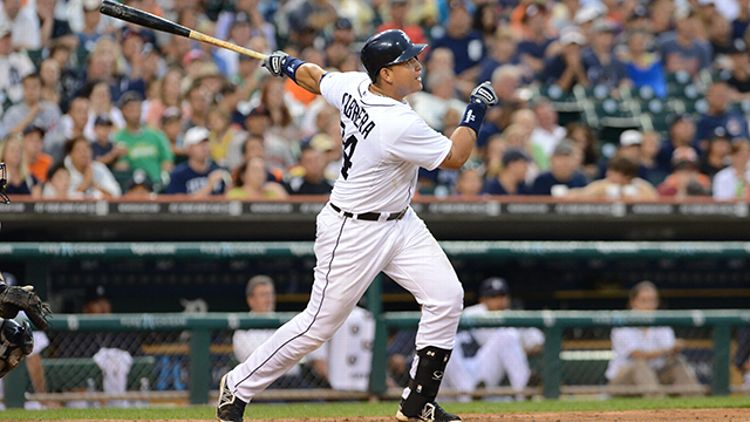 With apologies to those who revel in seeing Steve Delabar face Marco Scutaro, there is no worse time of year for sports fans than this week’s four-day dead zone. So what better time to hand out our midseason MLB awards? Here then are the players and teams that have made the biggest impact in the first half, with a sneak peek at a few potential second-half twists. We start with the American League today, followed by the National League tomorrow.

Granting that MVP voting depends not only on the quality of a player’s performance but also that of his rivals, it always struck me as funny that Cabrera could run away with the award last year in large part because he happened to lead in three categories that voters decided were important decades ago, even though his 2011 offensive performance was better than his 2012 effort overall. At any rate, Cabrera is in the midst of his best season ever, which is saying something, considering he already has a Hall of Fame case and he’s just 30 years old.

The Tigers third baseman leads the league in batting average (.365), on-base percentage (.458), and wRC+, a stat that takes all of a player’s offensive contributions, then adjusts for park and league effects. He’s probably the worst defensive third baseman in the league and one of the worst defenders at any position, and it doesn’t make a lick of difference, because his offensive output dwarfs that of any other player. Chris Davis is probably Cabrera’s chief competition right now, and the Orioles slugger leads the league in home runs and slugging average. But he’s also made seven more outs than Cabrera has, despite racking up 35 fewer plate appearances. This is one time when a straight look at player value, independent of team records and with little consideration given to traditional counting stats, returns the same result as the view of the masses, and of actual MVP voters. As of now, Cabrera’s the man.

Also considered: Chris Davis, Mike Trout, half the other third basemen in the league, Dustin Pedroia

We’re looking for a combination of high expectations and lousy performance, with bonus points for players who fail while being lavishly compensated. Though he’s shown sporadic signs of improvement, no one fits that bill better than Hamilton. Though the 14 home runs aren’t terrible (at least from a fantasy baseball standpoint), most everything else on Hamilton’s 2013 résumé is, including an overall line of .224/.283/.413 that is the worst of his career, and miles off last season’s .285/.354/.577 pace. Even after accounting for the move to a much tougher ballpark for hitters, Hamilton’s 2013 nosedive is one of the ugliest happenings for any would-be contender (or any team, period), and a bad omen in Year 1 of a five-year, $125 million contract.

This might be the closest of any of the major award races in either league, at least on pure merit. Hernandez holds a very slight lead in Wins Above Replacement, at both Fangraphs and Baseball-Reference. He also leads in FIP and xFIP by slim margins. Using ERA+, though, Hernandez slips to fourth in the AL.

We’ll give Hernandez the slight nod, since he’s not only at or near the top in both raw run prevention and fielding-independent run prevention, but also leads the league in innings pitched (which is counted in WAR, of course). Granted, pitching at Safeco Field does have its advantages. But Hernandez is also striking out a batter an inning, suppressing walks better than all but three other starters, and generally putting up a vintage King Felix season. Still, you can make an excellent case for Max Scherzer (even ignoring the 13-1 record) or Chris Sale (his 6-8 record is irrelevant), with Derek Holland a strong top-five pick who somehow isn’t in the All-Star Game and Yu Darvish possibly an even better pick had he not gotten sidetracked by a shoulder injury.

Rookie of the Year: Jose Iglesias

Slim pickings here, so much so that we’re giving it to the guy who has played in only 52 games. No rookie’s offensive numbers come close to those put up by Iglesias, who’s at .367/.417/.461. Sure, he’s beaten out a bunch of infield hits, and been generally fortunate to post a sky-high .414 batting average on balls in play. But we regress BABIP results for hitters more as an exercise in future projection than a gauge of present performance. And if we’re going to ding Iglesias for batted-ball results, we should probably throw out the misleading UZR results seen over one-third of a season that suggest Iglesias is a below-average defensive player (he’s a very good gloveman, actually).

But yes, Iglesias still projects as a long shot to win the actual award at year’s end, given his modest pedigree, the likelihood of BABIP regression, and especially the shiny crop of prospects to make their major league debuts over the past few weeks. The Rays alone have three potential second-half surgers: Wil Myers (.288/.321/.413 as the team’s new starting right fielder), Chris Archer (2.96 ERA in nine starts, including his first major league complete game and shutout on Sunday), and Alex Torres (33 strikeouts and a 0.34 ERA in 26⅓ relief innings). The Mariners’ Nick Franklin could also work his way into the mix.

We just spent nearly 4,000 words discussing how the Red Sox are not as big a surprise as you would expect, given they won 69 games all of last year and are already up to 58 at the All-Star break in 2013. A rash of injuries and subpar performances torpedoed their chances in 2012. But one big salary-dump deal with the Dodgers, a few mid-level signings, and continued reliance on an excellent core that includes Dustin Pedroia, Jacoby Ellsbury, David Ortiz, and Clay Buchholz, and the Sox are right back at the top of the heap. It’s only due to a glaring lack of other big, pleasant surprises that Boston wins this honor; in reality, those of us who write about and predict baseball for a living just whiffed on this one.

It might’ve been overambitious to install the Jays as early World Series favorites — or even AL East favorites — following their multiple, high-profile offseason pickups. Several of the players Toronto acquired, notably Jose Reyes and Josh Johnson, were serious injury risks who were far from guaranteed to come through; R.A. Dickey, too, if you’re someone who doesn’t trust 38-year-old knuckleballers. But sitting dead last, four games under .500 at the break is something even the biggest Jays doubters would’ve had a hard time predicting. When healthy, this is a much better team than what they’ve shown. But the fierce competition in the AL East and for the two wild-card spots, combined with the hole they’ve dug for themselves, mean the Jays’ chances of making the postseason lie somewhere between slim and none. This could still be a talented team in 2014 with just a few tweaks, starting with making Johnson available in a trade for near–major league–ready talent, plus a handful more moves this winter.

The Angels are a close runner-up here. We underestimated the damage that a lousy starting rotation could do, and overestimated what Josh Hamilton was likely to accomplish in his new digs. Like the Jays, the Halos stand a good chance of playing better in the second half, even popping back above .500. Bagging the 90 or more wins they need to make the postseason is a different matter altogether.

Contender Most Likely to Fall Off in the Second Half: Yankees

Bank 51 wins in the first half as the Yankees have, and you’re a contender. But this is a team on shaky ground. The Yanks allowed more runs than they scored before the break, such that their expected record is four games worse than their actual record. They rode hot performances from the likes of Vernon Wells and Travis Hafner, and that luck now appears to have dried up. This is still one of the league’s strongest pitching staffs one through 12, especially with Ivan Nova pitching well since coming off the disabled list. But unless the Yankees can replace Wells, Lyle Overbay, Jayson Nix, Eduardo Nunez, and the other stiffs who’ve seen far too much playing time with real talent, they’re a long shot to make the playoffs and might struggle to play .500 ball for the rest of the season. The health of incumbents like Derek Jeter and Curtis Granderson remains up in the air; even if they return, it might take multiple deadline deals just for the Bombers to keep pace with the many contenders in the AL East and wild-card races.

Also considered: Indians, Rangers (tied for the best one-run record in baseball, both facing questions about their starting rotations, with Texas dealing with potential Nelson Cruz–related tsuris to boot)

This is a loaded team that hasn’t played up to its potential, thanks largely to struggles with its late-inning relief corps. This is the easiest problem for any contender to solve: Even in a seller’s market where not many teams are in full offer mode, there are multiple relievers out there who can be had affordably. Whether it’s a (hopefully) healthy Jesse Crain, Oliver Perez, James Russell, one of the Marlins’ many likely-to-be-available bullpen arms, the Jays wising up and making Casey Janssen and Steve Delabar available, or other options, Detroit will have plenty of potential matches. Once solid incumbents Joaquin Benoit and Drew Smyly get the proper support, the Tigers should have just about everything they need to make a run at the World Series.