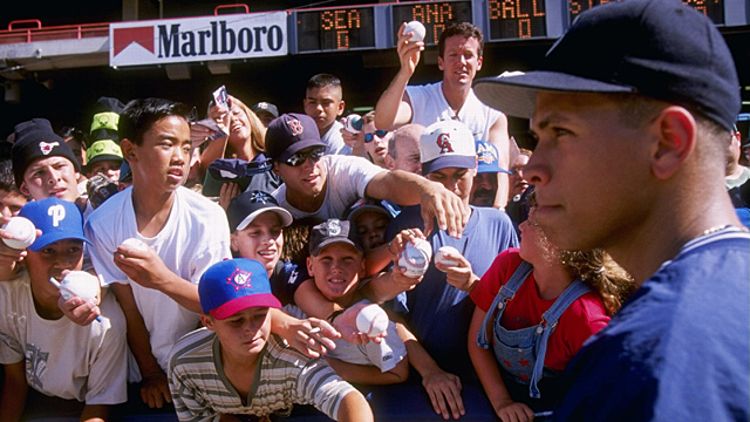 The only thing that makes me feel good about Major League Baseball’s recent public resurrection of the Biogenesis affair is that the public face of the 20-odd targets of the investigation (if you can call it that) seems to be Ryan Braun. That’s not because I think Braun deserves to have his name dragged through the mud again — as someone who enjoys watching the most skilled players in the game do what they do best, I certainly don’t want Braun to sit out for 50 or 100 games, and while I’m all for suspending athletes who break the rules, I don’t think it’s fair to throw out those rules whenever they deliver an outcome you don’t like. I like Braun a lot, and I hope his name is cleared.

But I’m just glad this isn’t only about Alex Rodriguez. Because I’m tired of one of the greatest players of all time being turned into a punch line.

Bill James once said that if you cut Rickey Henderson in half, you’d have two Hall of Famers. You could probably do that to A-Rod, too. Cut off his career after his age-27 season, and you get an above-average defensive shortstop with a .308/.382/.581 slash line and an average of 23 stolen bases per 162 games. That’s good for 63.4 WAR — in twice as many plate appearances, Hall of Famer Luis Aparicio was worth 55.5. Other middle infielders in that range: Craig Biggio, Chase Utley, Pee Wee Reese, Roberto Alomar. And that’s if, instead of moving to New York and third base (a move that Miguel Cabrera seems to get more credit for than does Rodriguez), Rodriguez had retired two months after turning 28.

In the interest of full disclosure, I should say I’ve always loved A-Rod. He was a member of those late-1990s Mariners teams that, thanks to Ken Griffey, were the coolest thing ever to exist to people my age. Despite being a Phillies fan, I grew up with an A-Rod poster on my wall. So I never got the hate. I never understood why admiring Derek Jeter meant you couldn’t admire Rodriguez, too.

It could be that the Yankees had won six pennants and four World Series between when Derek Jeter arrived and when Rodriguez arrived, then won neither for the first five years of Rodriguez’s Yankees tenure. Though considering that Rodriguez had a 153 OPS+ in that span and won two MVP awards, it’s hard to say that he was an impediment to their making the playoffs, and in his first five Yankees postseasons, he was pretty good, too — an aggregate .288/.420/.568 line, more or less matching his regular-season totals and at least hitting Jeter (.311/.380/.503 in that span) to a draw. But a team’s deficiencies always get blamed on its best players. Sports are team endeavors, and championships are won by teams. But titles are lost by individuals when that line of reasoning is convenient. How can Rodriguez, or Peyton Manning, or LeBron James, be so great when he (singular) hasn’t won a championship? There’s a certain point at which the only way to denigrate a player’s accomplishments is to blame him for the failings of others.

But the “loser” stink came off of Manning and LeBron when they won their titles. Why not Rodriguez?

Sure, he admitted to using performance-enhancing drugs, and while that doesn’t bother me as much as it might bother others, how come Andy Pettitte got off the hook? Yeah, he’s an arrogant egomaniac, but isn’t that why we venerate Michael Jordan? Was his dalliance with Madonna any weirder than the extramarital foibles of Tiger Woods, or Chipper Jones, or Wade Boggs?

Somewhere along the line, between the enormous contract, the drugs, the Centaur painting, the awkward interviews, slapping Bronson Arroyo, shouting at Howie Clark, crossing Dallas Braden’s mound, the postseason failures (perceived and real), and the Popcorn Incident, it stopped mattering what Rodriguez did, good or bad. It reached a point where we’d had enough, even though we’ve forgiven lesser athletes for greater transgressions. It reached a point where, to quote one of the great courtroom scenes in recent television history, “No, you … you have to die, because, well, because we don’t like you very much.”

And fair enough, I guess. Alex Rodriguez has done a lot of things, on and off the field, to make him easy to hate. He’s a punch line and a pariah, but we’re too quick to forget that he’s also one of the greatest players we’re ever going to see.