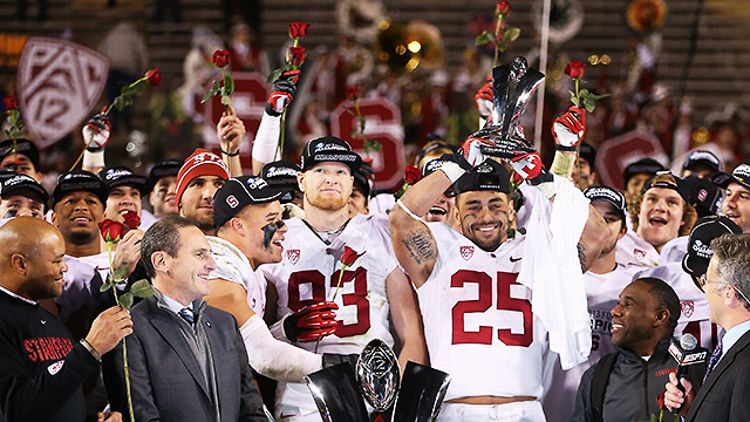 Michigan State brought tranquility to this year’s championship race by eliminating Ohio State from the ranks of the undefeateds and paving the way for a Florida State–Auburn title game matchup devoid of the chaos and controversy that has so often defined the BCS era.

But it’s in our nature as sports fans to create controversy when and if it’s lacking. So, amid the unusual calm that wound up defining the final year of the BCS, let’s engage in a little thought experiment that’s sure to spark plenty of debate: If the college football playoff had begun this year, which teams would be in the mix for the third and fourth slots?

Andrew Sharp on the shame of Auburn football.

Let’s assume Florida State and Auburn would have earned the top two seeds in the playoff, just as they finished 1-2 in the BCS standings. That still leaves ample room for debate over team nos. 3 and 4. Beginning next year, the selection committee will seek to balance wins and losses with more nuanced metrics such as strength of schedule and margin of victory.

The rankings I produce at The Power Rank can help us examine the rest of the contenders.

The small dots represent each team’s rating, as measured by its expected margin of victory over an average team. The large dots give a rating for each conference, which is obtained from averaging the ratings of the teams in that league.

The visual addresses strength of schedule in two ways. First, large dots facilitate a quantitative comparison of conferences. The SEC and Pac-12 emerge as the two strongest conferences. The Big 12 bridges the gap between those top two leagues and the Big Ten and ACC. After the top five conferences, there’s a significant drop before we hit the American Athletic Conference.

Second, seeing the distribution of teams within conferences and between conferences sheds light on teams’ relative strength. Florida State was much better than any team in the ACC, while the Pac-12 has a logjam at the top. The MAC was better than the Sun Belt, but the MAC also had some really bad teams.

The Power Rank uses margin of victory in its calculations. The BCS forbade its computer rankings from using that important metric, in an effort to deter teams from running up the score. However, there will be no such restriction for the college football playoff selection committee.

And it’s a good thing: Margin of victory matters for the predictive accuracy of ranking systems. Since 2005, the higher-ranked team in The Power Rank has won 63.4 percent of bowl games in a sample of 265 games. In contrast, the higher-ranked team in the Colley Matrix, one of the computer rankings used in the BCS, has won just 55.1 percent of the time.

Using The Power Rank’s calculations, we can argue for and against four of the teams that would be in the mix for the final two spots if the playoff began this year.

Strength of schedule: no. 42

Case for: Alabama’s only loss of the season came when Auburn returned a missed field goal for a touchdown as time expired. Otherwise, the Crimson Tide dominated their opponents over the latter part of the season. Moreover, Nick Saban and the two-time defending champions would likely get the benefit of the doubt from the committee.

Case against: The Tide didn’t win their division or play in their conference championship game. Moreover, they only ranked ninth in yards per play adjusted for strength of schedule, the efficiency metric used to make accurate second-half predictions. Oh, sorry, I just woke up from a dream in which the selection committee understands and uses efficiency metrics.

Strength of schedule: no. 3

Case for: The Cardinal played a killer schedule and won the Pac-12, which, as shown above, is one of the two best conferences. They field a defense as stingy as any in the nation and a power running game that makes no effort to disguise its intentions on third-and-short.

Case against: The Cardinal lost two games. And Utah and USC aren’t on anyone’s list of elite teams.

Strength of schedule: no. 52

Case for: The Spartans won the Big Ten. They also have a lights-out defense and might have gone undefeated had Notre Dame not benefited from a horde of pass interference penalties in South Bend.

Case against: The offense was a joke early in the year, although the Spartans have steadily improved since quarterback Connor Cook took over. More importantly, the Big Ten was not nearly as strong as the SEC or Pac-12, and Michigan State didn’t help its cause by scheduling Western Michigan and Youngstown State.

Strength of schedule: no. 54

Case for: The Bears won the Big 12, the third-best conference in the nation. They fielded an elite offense that scored points at will in most games this season.

Case against: They got crushed at Oklahoma State late in the season. And a nonconference schedule of Wofford, Buffalo, and Louisiana Monroe is hardly impressive.

The selection committee will have a thankless task in selecting four teams for a playoff. The committee must somehow balance wins and losses (and whether a team wins its conference championship) with strength of schedule. If the playoff began this year, one could make the case for any of the four teams discussed here, as well as for Ohio State and Oregon. Conference strength would benefit Alabama and Stanford, though Stanford’s extra loss would be an uphill battle compared to one-loss MSU and Baylor.

No, Mike Shanahan, This Is How You Get Fired ...