How Will Liverpool Compensate for the Loss of Luis Suárez? 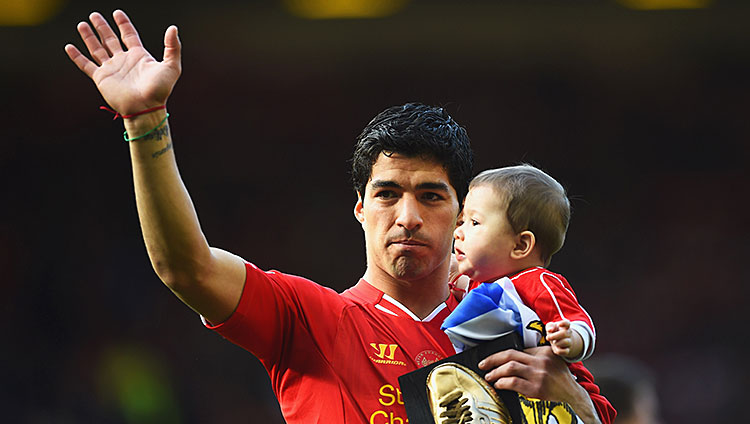 Luis Suárez was and is a nutmegging, penalty-drawing, goal-scoring menace. Last season, he was the consensus best player in the Premier League, the catalyst for Liverpool’s return to Champions League football as well as their just-missed dalliance with the league title. He scored or assisted on more than 40 percent of Liverpool’s 101 goals last season, scoring 31 and assisting on 13.

And now he plays for Barcelona, sold for £75 million, despite being banned for four months for biting Giorgio Chiellini during the World Cup. As Liverpool’s Premier League season approaches, the question is this: How do you replace an irreplaceable player?

Suárez was the perfect forward for Brendan Rodgers’s system. Rodgers is a fiddler, and Suárez was his Swiss Army knife.

Suárez’s positional versatility matched perfectly with his manager’s penchant for tactical fiddling. As Liverpool writer Andrew Beasley pointed out on Twitter, Rodgers has run out 11 different formations over the past two seasons. Liverpool’s lack of squad depth forced Rodgers to tinker to get the most talent on the pitch. Late last season, the Reds found success with a 4-4-2 diamond. This formation put Steven Gerrard in position to be an assist machine from deep, while allowing either Coutinho or Raheem Sterling to excel in an attacking midfield role. Suárez was then allowed to freelance up front, shredding defenses both by making tricky runs off the ball in the middle of the pitch and picking the ball up in wide areas to create for others. This benefited Sturridge, who was able to then find himself alone in dangerous spaces.

Finding a player capable of doing everything that Suárez did is not going to happen unless Arjen Robben suddenly becomes available. Fortunately for the Reds, Rodgers has also shown himself to be comfortable using a lone striker.

If available personnel is capable, Rodgers prefers flanking a lone striker with two wide players, buttressed by a three-man midfield capable of inverting itself between a 2-1 (with two advanced midfielders in front of a single deep lying midfielder) and 1-2 (pictured above) formation seamlessly. However, with midfielders Lucas and Joe Allen limited last season, Rodgers’s midfield setup usually saw Gerrard playing as a lone, deep-lying playmaker, with Jordan Henderson and Coutinho playing in advanced roles. This was great for their offense, but it also left Liverpool’s back line exposed.

All of this is to say that to replace Luis Suárez’s role on the field, Rodgers had three choices: clone Luis Suárez (impossible and dangerous), find an approximate clone of Luis Suárez (almost impossible and expensive), or strengthen Liverpool’s wingers and midfield depth so that the team can be as tactically versatile as possible behind Daniel Sturridge. While Rodgers’s first choice was the approximate clone option, Alexis Sánchez snubbed Liverpool for Arsenal. So Rodgers went out and bought a mix of players to compensate. Of these, Adam Lallana cost the most and garnered the most attention. Lallana is a useful player, but his tactical function will be similar to that of Henderson and Coutinho. The two more interesting additions are 20-year-olds Lazar Markovic and Emre Can. 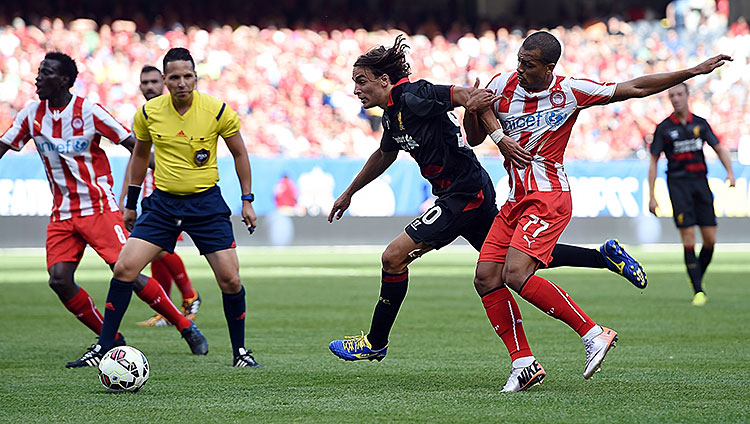 Markovic, who came over from Portuguese champions Benfica, is the wide attacking option Liverpool had failed to acquire over the past three transfer windows. Rodgers had reportedly pursued a number of wingers including Willian, Christian Atsu, Mohamed Salah, and Yevhen Konoplyanka, only to be thwarted. Markovic is rawer than Konoplyanka and less capable as a two-way player than Willian, but he is incredibly explosive, capable of beating opponents off the dribble in a few different ways. Unfortunately Portuguese dribbling stats are hard to come by (get it together, Portugal!), but Markovic has the capacity to instill fear with the ball at his feet when cutting in from wide positions.

German U20 star Emre Can is a midfield destroyer capable of contributing in attack. He can fit as a lone holding midfielder, one of a pair of deep-lying midfielders, or as one of two attacking midfielders. He’s a massive physical presence with a smashmouth running style on the ball. Can draws superficial comparisons to a young Sami Khedira, but there are significant similarities between their styles of play. The most important similarity is versatility; Can is an adept central midfielder and fullback. He could slot into the back or side of a four-man midfield diamond.

In a single match against Norwich City, Suárez managed to score an average striker’s career highlight reel, knocking in a Zlatanesque ninja kick while getting his shirt tugged, a 40-yard volley, a half volley after rainbowing a defender, and a free kick around a wall.

Controversial statement: No player in world football will reproduce the array of goals that Suárez scored last season, not evenSuárez.

None of the players that Rodgers has brought into the squad will be scoring any of these goals with regularity. So it will fall to Sturridge, Coutinho, and Sterling to fill the void.

Daniel Sturridge was one of Europe’s most prolific strikers last season, scoring 21 goals in 29 league appearances. It’s possible that he will regress without Suárez creating chances for him. However, Sturridge’s goal return was slightly higher when Suárez was out of the lineup over the past season and a half. Also, Sturridge is still young; even if his shot conversion rate regresses this season because he’s forced to take more difficult chances, he’s still a player whose skill set is improving.

Coutinho’s dribbling and passing stats are elite for his position. Aside from goal scoring, he is a creative force of Suárez’s caliber. His problem was shot selection, as he scored on barely over 5 percent of his shots last season. For comparison, Suárez scored on 17 percent. Coutinho is only 22, and could well improve his conversion rate. Given the volume at which he takes bad shots, even a slight uptick in selection could lead to a much higher goal return for the Brazilian midfielder.

Then there’s Raheem Sterling. The 19-year old wunderkind’s complement of skills and top-level accomplishments are unparalleled in the under-20 set across world football. In baseball terms, Sterling is a five-tool prospect, producing at the big leagues years ahead of schedule.

Over the past two seasons, Sterling has been a dribbling machine, having beaten defenders over twice per 90 minutes. He’s also a solid defensive presence, tackling at an above-average rate for his position, despite his small frame and relative inexperience. He also completes passes at an over–80 percent clip.

What changed last year was his final product. His shooting accuracy went from around 40 percent to over 65 percent. He also tripled his assist rate. No other player his age in any of the five major leagues in Europe managed 10 combined goals and assists last season. Sterling had 14.

Just for fun, some current players who made this kind of leap at that young of an age in the English Premier League: Wayne Rooney and Cesc Fàbregas.

Also for fun, I’m going to link to a montage of Sterling’s touches from 45 minutes of football played against Manchester City at Yankee Stadium on July 23rd. I mention the venue only because of the narrowness of the pitch, squeezed into the baseball stadium. The lack of width should have made it harder for Sterling to find space given where he was positioned for most of the match; it didn’t.

His touch, his vision, his finishing, these are the things that make him elite. Again, this is just for fun, and there are some caveats against reading too much into this video: It’s one match, a friendly, in which Sterling was up against the corpse of Micah Richards. But again, Sterling is 19 and he’s been putting together performances like these throughout 2014.

Even if Coutinho shoots better, Sturridge doesn’t regress, Markovic and Can settle into the squad, and Sterling takes another step forward, there is still a chance that Liverpool takes a big step backward this season. That’s how good Suárez was last year.

Here’s the thing: Liverpool could still have taken a big step backward had they kept Suárez. Unlike the talent that remains, Suárez, now 27, no longer qualifies as young. He is fully formed. He also ran unsustainably hot last season. There is very little difference between the underlying skills that led to Suárez’s goal return over the last two campaigns. Suárez has both always been as good as he was last year, and also is not as good as he was last year. Barcelona have the talent to be able to absorb that volatility without risking their place among the elite of world football. Liverpool do not. Leaning on genius has its advantages, but as Suárez has demonstrated throughout his career, it’s an unstable position to stake out.