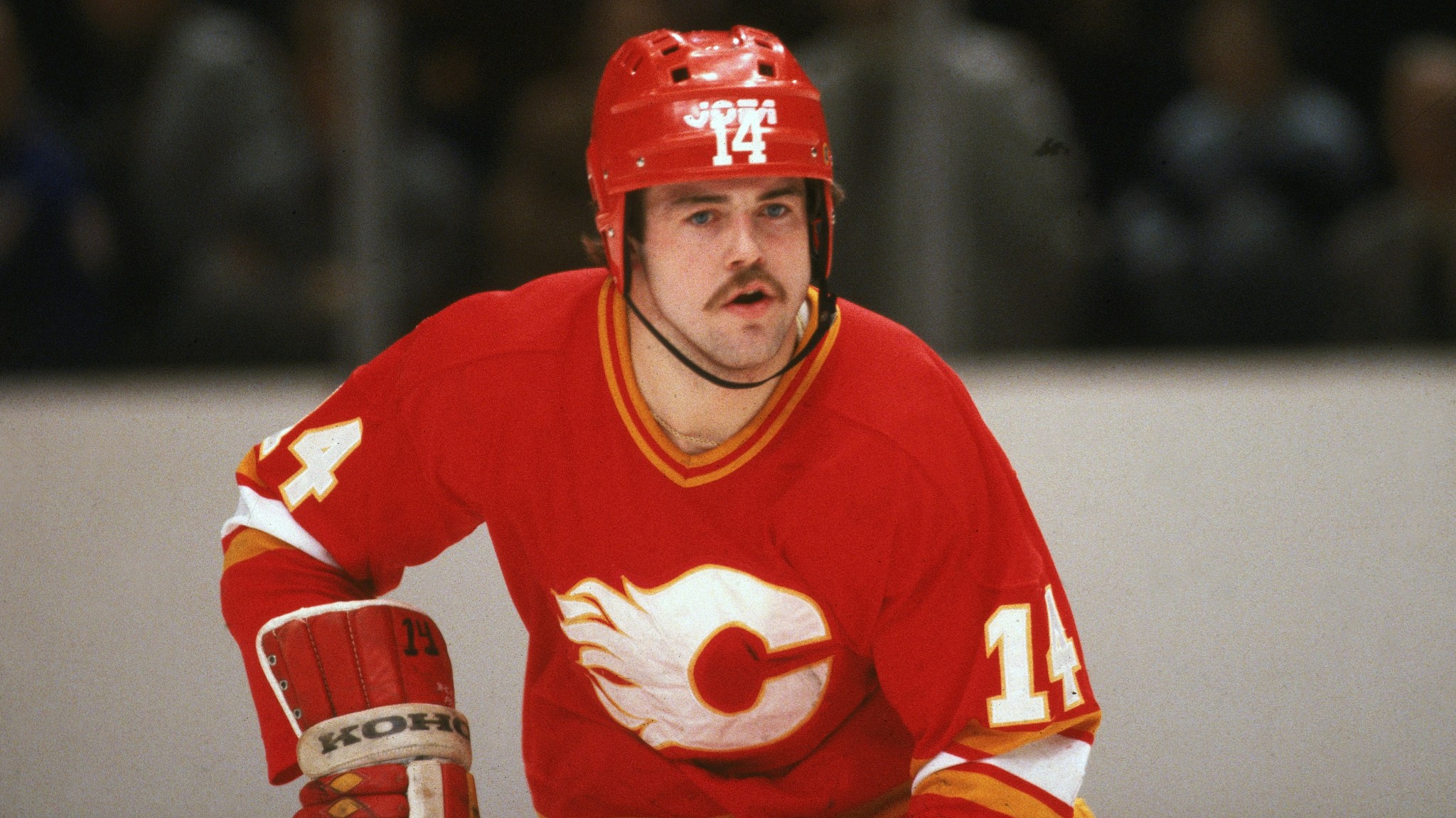 One thing we occasionally like to do in this space, especially during the late summer dog days when nothing else is happening, is leaf through the pages of the NHL record book. While many of you who read these posts are hockey diehards with decades of fandom under your belts, I realize that others may be slightly newer to the sport. So every now and then, it can be fun to take an educational and nuanced look back through NHL history.

And so, in that spirit, today we’re debuting a feature called Holy Crap, the 1980s Were Freaking Insane. Because, good lord, that entire decade was incredibly offensive.

That’s “offensive” in the good way — as in lots and lots of offense. At its peak, the era saw an average of just less than eight goals per game. By comparison, the dead puck era of the late ’90s and early ’00s dipped down to a borderline unwatchable average of 5.1. (Luckily for us, Gary Bettman and friends didn’t stand idly by, and a series of new rules has since managed to drive that number all the way up to … uh, 5.3.)

Not surprisingly, most of the major scoring records were established during the ’80s, many of which are unlikely to ever even come close to being matched. Even casual fans probably know some of them by heart, like Wayne Gretzky’s 92 goals in 1981-82 and 215 points in 1985-86, or Mike Bossy’s nine consecutive 50-plus-goal seasons to start his career.

But it wasn’t just the household names who racked up obscene numbers during the decade. Just about everyone, from Hall of Famers to guys you barely remember, was putting up ridiculous numbers. That’s what made the ’80s so much fun. And it’s why it’s worth taking an occasional look back at some of the madness that went on.

The Legend of Kent Nilsson

Nilsson played just eight full NHL seasons with no major awards, and depending on how old you are or how well you remember the 1980s, there’s a good chance he’s the most productive player you’ve never heard of.

After two years in the WHA, Nilsson made his NHL debut with the Flames at the beginning of the 1979-80 season. He was traded to the North Stars in 1985, and split two more seasons between Minnesota and Edmonton before heading back home to Europe. Except for a six-game comeback attempt with the Oilers in 1995, his NHL career was essentially over by 1987. He played in only two All-Star games, the last in 1981, and was never really considered one of the league’s top players. In fact, he may be best remembered as the Oiler who got hacked by Ron Hextall in the 1987 final.

He also struggled to stay healthy in his later years, only hitting the 70-game mark once after 1983. That last bit was good news for opposing goaltenders, because whenever Nilsson did play, he racked up points at a rate that was almost unmatched in league history.

That’s not an exaggeration — Nilsson’s career point-per-game average ranks him ninth on the all-time list. Here’s a look at a few of the guys who are trailing him. They’re pretty good.

Part of that’s due to Nilsson’s elite (if underappreciated) skill level; he was nicknamed the Magic Man and was considered the true inventor of the breakaway move we now know as the Forsberg. But it’s also a factor of him playing in the madness of the 1980s. Of the top 25 players on the point-per-game list, 15 played a big chunk of their careers during the decade.

In fact, a look through the record book shows that most of the league’s offensive rate stats are dominated by ’80s guys. Here’s one more …

It wouldn’t surprise you to see that most of the career goals-per-game leaders had their best years in the 1980s. You’d expect to see players like Bossy (no. 1), Mario Lemieux (no. 3), Gretzky (no. 7) and Brett Hull (no. 8) on the list. But there was another ’80s star lurking in the top 10 until this most recent season, when Steven Stamkos nudged him down to no. 11. And like Nilsson, his name may not ring many bells among the younger generation of fans.

As a kid who grew up in the ’80s, here are three things I remember about Flyers forward Tim Kerr:

• His mustache/mullet combo was fantastic.

• I assumed he was a super cool guy because I had a hockey card of him accepting the Masterton Trophy, and he hadn’t bothered to dress up.

• He scored pretty much every time he touched the puck.

That last item helped Kerr to a career goals-per-game average of 0.565, which ranks ahead of guys like Rocket Richard and Phil Esposito. He once set a playoff record by scoring four goals in just more than eight minutes at MSG. (By comparison, Anze Kopitar led the entire league in playoff points last year while managing five goals total.)

Kerr put up those monster totals despite a decidedly slow start to his career. He went undrafted before signing with the Flyers in 1980, and after missing most of the 1982-83 season to injury, he’d spent the first three years of his pro career having managed just 54 goals total. But he’d double that career total by racking up 54 goals in 1983-84, and then matched that again in 1984-85. That was followed by back-to-back 58-goal seasons, giving him a streak of four consecutive 50-goal seasons that still stands as the Flyers’ franchise record.

Injuries struck again, wiping out most of his 1987-88 season, before he put up one more big year by scoring 48 goals in 1988-89. He retired in 1993 and still sits third on Philadelphia’s career goals list, ahead of better known stars like Bobby Clarke, John LeClair, and Eric Lindros.

When you look at the sort of numbers that guys like Kerr and Nilsson were racking up during the 1980s, you might start to wonder if there were any goaltenders back then. Well, about that …

Being a Goaltender: Not Fun

The ’80s were a turbulent decade for goaltenders. The list of Vezina winners reflects that, as not one goalie managed to win the award more than once. And even the ones who did get their hands on the trophy often did so while putting up inflated numbers in the process.

It’s not easy to pick a standout from that list, but I’ll go with Edmonton’s Grant Fuhr, who was named the league’s best goalie in 1987-88 despite leading the league in goals allowed. That’s not even the surprising part, since at least some of Fuhr’s votes were in recognition of his league-leading 75 games played. He had a reputation as a big-game goaltender and a winner — he was basically hockey’s Jack Morris — and he did lead the league with a career-high 40 wins. When the award was announced, nobody batted an eye. In fact, Fuhr also finished second in Hart Trophy balloting as league MVP.

All of which makes it sort of stunning to look back at his actual numbers. That season, Fuhr recorded a goals-against average of 3.43 and a save percentage of .881. Neither of those were in the top 10 leaguewide, but they weren’t awful. It was just the 1980s, when every goalie got lit up. For example, Patrick Roy led the league that year with a .900 save percentage. Today, a .900 probably gets you shipped directly to the minors (unless you’re Martin Brodeur).

Of the 61 goaltenders who played at least 20 NHL games last year, here’s a full list of those who had a worse save percentage or goals-against average than Fuhr’s Vezina-winning 1987-88 season: Dan Ellis. That’s it. Everyone else matched or beat Fuhr’s numbers.

Think of it this way: Devan Dubnyk had a 3.43 GAA and .891 save percentage last year, during a season which saw him get traded twice, buried in the minors, and eventually described as “the worst-case scenario.” Fuhr had a 3.43 and .881 in 1987-88 and nearly won the MVP. Maybe that’s because he somehow resisted the urge to throw all of his equipment into a Dumpster while screaming, “Screw this ridiculous decade, I quit.”

Oh, just the Hawks and Oilers combining for 21 goals in a single game. No big deal. Just business as usual in the mid-’80s. (My favorite stat from this game: Edmonton going 0-for-1 on the power play.)

This game was played a few months after the two teams met in the 1985 conference finals, in which the Oilers established an NHL record by scoring 43 goals in six games.. As you can see, 1980s teams kind of missed that memo about going into a defensive shell during the playoffs.

All of this leads to this question: Did NHL defensemen actually do anything during the ’80s? Well, yes. They did what everyone else did. They scored goals.

How silly? Try a 48-goal season, which Paul Coffey managed during his Norris-winning 1985-86 year. That topped a decade-old record by the immortal Bobby Orr that had been viewed as unbreakable. It was also one of only three 40-goal seasons ever recorded by a defenseman (we’ll get to the third in a minute).

To put the number in some perspective, the most goals scored by a defenseman since 2000 was Mike Green’s 31 in 2008-09 — and that season was the only one since the 2004 lockout in which the top two scoring defensemen have managed 48 goals combined. Nobody else has managed to score more than 26 since Al MacInnis had 28 all the way back in 1993-94.

As for that third 40-goal season by a defenseman, it was also by Coffey, and it may be my favorite. In 1983-84, he put up 40 goals and 126 points, both of which were the highest totals ever produced by any defenseman other than Orr. And yet Coffey didn’t win the Norris that year. He came second to Rod Langway, who just missed catching Coffey in the scoring race by, uh, 93 points.

Maybe it’s just me, but I love the idea of a defensive defenseman winning the Norris in the middle of the craziest offensive decade in modern history. I’m assuming the writers saw Langway accidentally break up an odd-man rush or block a shot one time, and they were so impressed by that unheard of innovation they just had to vote for him.

Men in Blazers: 10 Premier League Questions, and an Interview With Miguel Herrera

How Will Liverpool Compensate for the Loss of Luis Suárez?